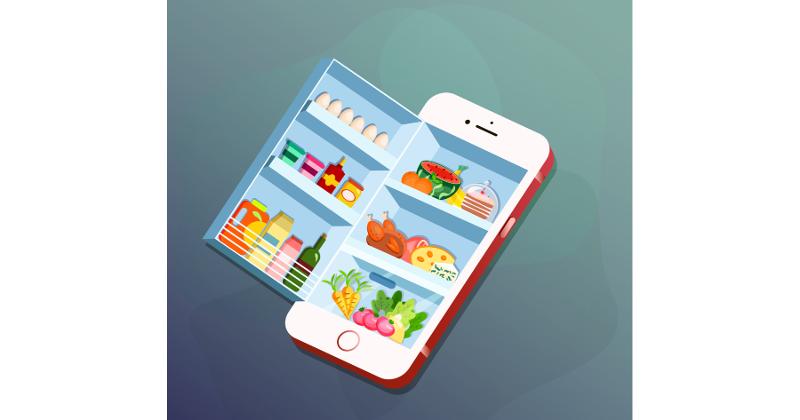 After experiencing a year of skyrocketing digital sales that tested retailer’s abilities to expand their availability and service, a sales decline of 14% in February as compared to January presented another kind of challenge: How to adjust to volatility at speed.

The slowdown—driven by a decrease both in the number of online shoppers and in order frequency, but also likely influenced by the cadence of federal stimulus money and the early impacts of a vaccine rollout—was somewhat expected given January’s record high figures and customer intentions of repeat buying expressed then, but should by no means be seen as evidence of a trend other than that volatility in the space is remaining, said David Bishop, partner of the Barrington, Ill.-based digital consultancy Brick Meets Click, whose monthly survey revealed the digital sales slowdown. A resumption in stimulus payments now arriving, and other factors, including potential coronavirus flareups, played against a reopening economy and increasing vaccinations, will likely whip that figure around again, Bishop said in an interview with WGB.

“This is going to be a very choppy, bumpy year. There’s going to be a lot of turbulence, and that’s going to continue to make it difficult to plan and to respond,” Bishop said. “If 2020 was extremely disruptive, 2021 will be less disruptive, but still will be disruptive enough that retailers will remain a little bit off-balance because it’s still going to be unclear how things shake out simply because we’re going to have these disturbances that shakes the snow globe back up and disrupts behavior that causes this temporary shift.”

The Brick Meet Click/Mercatus survey, conducted Feb. 26-28 among 1,800 adults who participated in their household’s grocery shopping decisions, indicated spending on digital groceries dipped to $8 billion in February. The predominant driver of the February decline in sales was the smaller base of households buying groceries online; monthly active users dropped 12% from 69.7 million in January to 60.1 million in February, with much of that reduction—over 40%—coming from those over the age of 60 that researchers said may reflect growing confidence and/or personal preferences for in-store shopping as COVID-19 vaccinations roll out.

Lower order frequency was also a factor, with online grocery shoppers placing 6% fewer orders, or 2.7 orders a month vs. 2.8 in January. Delivery and pickup orders showed a smaller decline of 4%.

Partially offsetting those declining numbers was a 4% month-over-month increase in average order value, or AOV, boosted by the shift of online orders toward pickup and delivery, which typically involve larger orders. Households spent an average of $82 in February for orders received via delivery or pickup, which is 55% larger than orders shipped-to-home via common or contract carriers. The second factor is growth in both the respective AOVs for ship-to-home and delivery/pickup segments. The AOV for ship-to-home orders jumped nearly 11%, while the AOV for the delivery/pickup segment grew just over 1% in February vs. January.

The combined delivery/pickup segments captured $6.1 billion of the $8 billion spent in total. Of that, pickup continued to gain share with nearly half of all online sales picked up at stores. 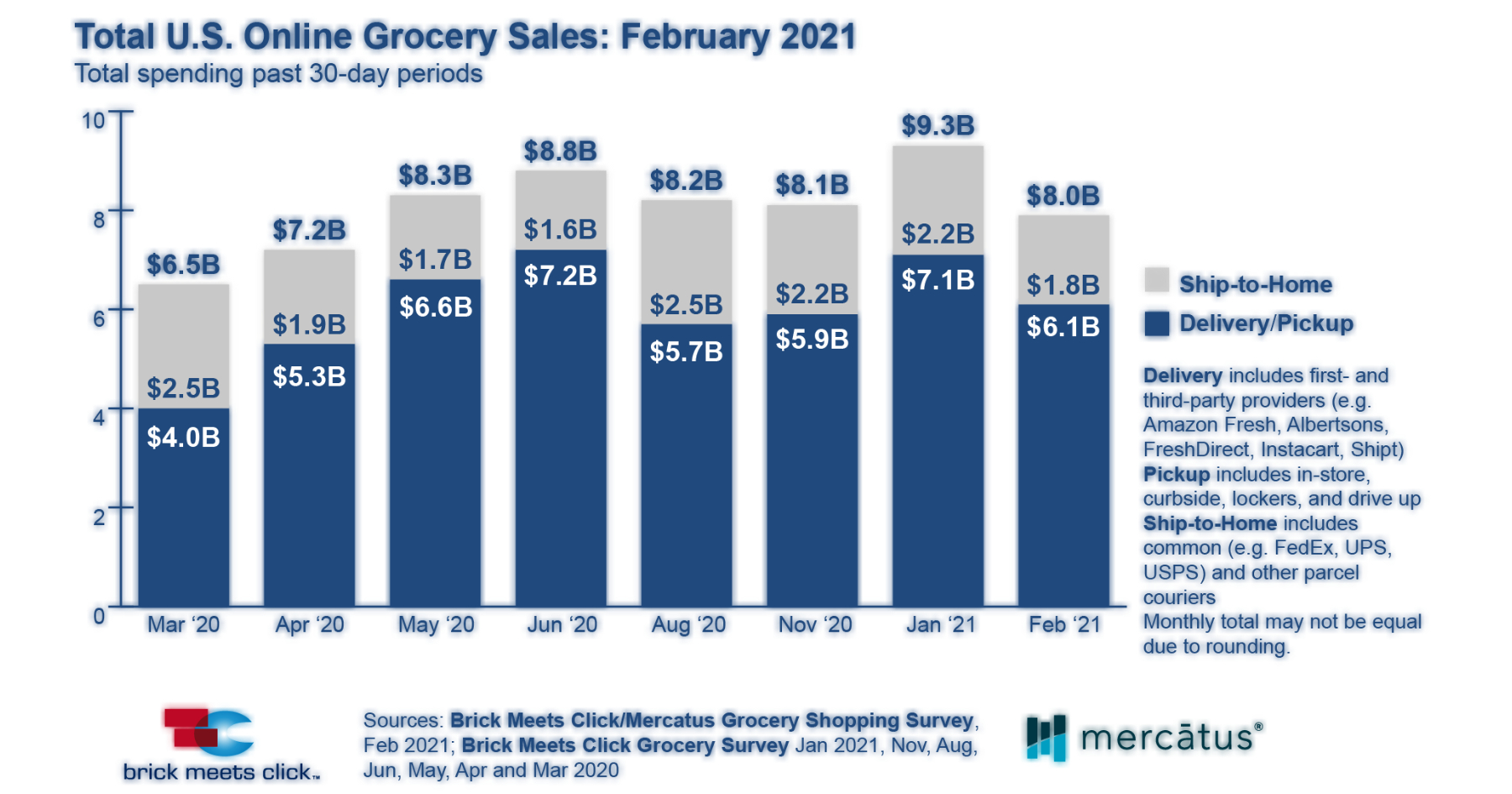 The leading indicator, “likelihood to use a specific service again,” stabilized in February as 58% of households reported being extremely/very likely to place another order with the same delivery or pickup service within the next 30 days.

The sudden growth of online shopping coinciding with the onset of the pandemic last March—and the looming year-over-year comparisons facing grocery retailers as they lap that mountain this year, is sparking a move among publicly traded retailers to reset expectations, Bishop noted, but it's important retailers don’t “pump the brakes,” but rather adjust on the fly. “They’re making it as though this rapid, sudden acceleration that we had in March of 2020 was not only unforeseeable, it was uncontrollable. It wasn’t the result of anybody doing something intentional, other than responding.”

As the economy gradually reopens and travel resumes—portending a shift in 2020’s disrupted mix of food consumed at and away from home—now is the time for retailers to assess where they are relative to expectations before COVID’s abrupt arrival and to adjust their strategies around how these changes have impacted their respective strengths, Bishop added.

“What retailers need to be doing now is saying, we survived 2020 and survival was important because while everyone was planning for the future, no one was prepared to live it, not even Amazon,” he said.

For companies such as Kroger, which is preparing to launch its first fulfillment center with Ocado it planned for three years ago, “they need to ask themselves, ‘Are the assumptions that drove our decision to move this way still valid today as they once were? A lot has changed. Are our strategies still sound and sustainable going forward?’”

With the choppiness exhibited between January and February’s online sales totals likely to continue, this kind of reset, Bishop argued, will be critical.

“Because otherwise, it’ll be, ‘Whatever happened to e-commerce this year?’ ” Bishop said. “Last year, we had a 100-year event, we lived through it. But if people get distracted and [act] like e-com is dead, it’s like almost the same story about how stores are dead, and it just becomes a distraction. The battle is in understanding. What does it mean, and what do you do with it?”