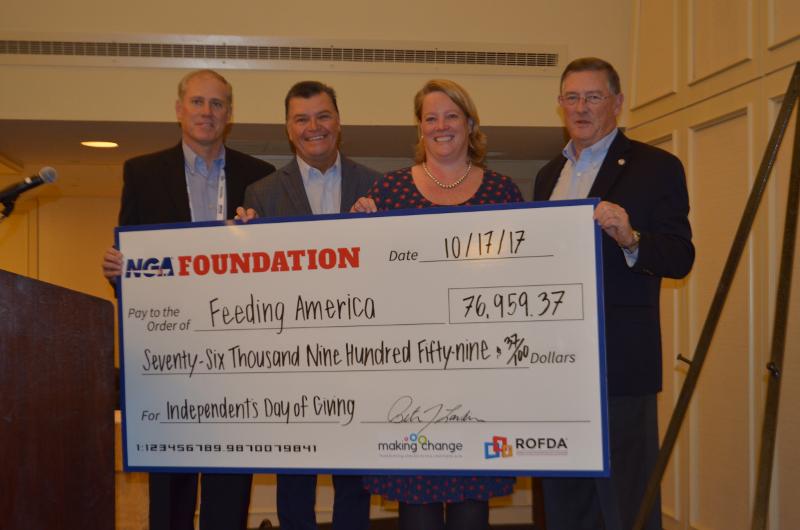 The NGA Foundation, the philanthropic arm of the National Grocers Association, raised nearly $77,000, or 846,553 meals, for Feeding America as part of the first-ever Independence Day of Giving campaign. The donation was presented as a check to Nancy Curby, SVP of corporate partnerships and operations at Feeding America, during NGA’s Fall Leadership Meetings in Chicago.

The campaign, in partnership with Retailer Owned Food Distributors & Associates (ROFDA), encouraged shoppers at locally-owned supermarkets to add a $1, $3 or $5 donation to their grocery bills throughout the month of June, with a focus on June 21 as the Independents Day of Giving. The funds will be redistributed to local food pantries to help purchase, package and transport food to Americans who are facing the nation’s hunger crisis through Feeding America’s nationwide network.

“Whether it’s restocking nearby food pantries in times of need or raising money to close the hunger gap, locally-owned independent supermarkets have a long history of giving back to the communities they serve,” says Peter J. Larkin, president and CEO of NGA. “It’s just another example of how independent grocers across the country stand apart.”

The donations were collected by Making Change, a registered 501(c)3 nonprofit, and redistributed back into the local communities of each participating independent supermarket by Feeding America.