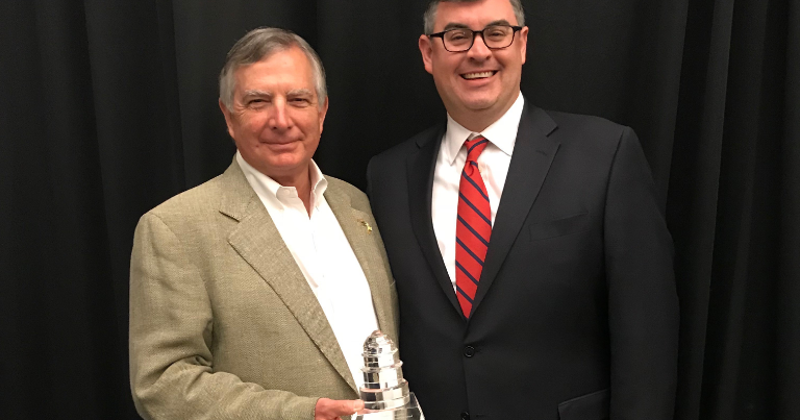 NGA EVP Greg Ferrara presented the Clarence G. Adamy Great American Award to Brown earlier this week at the Oklahoma Grocers Association Chairman’s Dinner in Oklahoma City. The award is bestowed annually to an individual or company whose "leadership in the food industry best exemplifies active and effective participation in government relations as a citizen and industry representative."

Ferrara praised Brown as being an NGA member who "constantly goes above and beyond to help NGA get wins for the independent supermarket industry. Whether it’s bringing a delegation of retailers to Washington, D.C., each year or hosting elected officials in his store, Jim is focused on building relationships and helping policymakers understand the important role independent supermarkets play across Oklahoma and the nation,” he said.

Ferrara said NGA is "lucky to have people like Jim, who are tireless advocates for our industry’s public policy agenda and have helped build NGA into the respected organization that it is today. Simply put, our industry is better today because of the work of people like Jim Brown.”

The award's namesake, Clarence Adamy, was a past president of the National Association of Food Chains and was very active in public and government affairs, having served as patronage chief and personnel director of the Republican National Committee during the Eisenhower years in the 1950s, and as a member of the Bradley Commission in 1956 that made veteran pension recommendations. He was also highly regarded for his advocacy on behalf of the industry when it was facing government investigations concerning pricing during an inflation period in the 1970s.