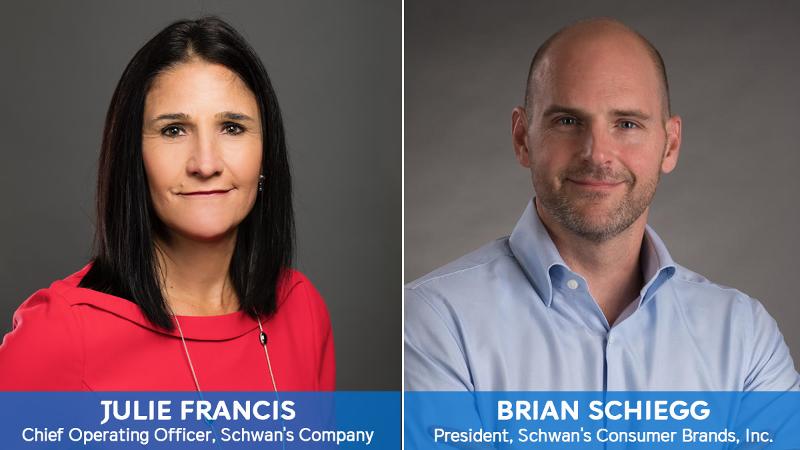 Francis joined Schwan's in 2018, and in her tenure as Schwan's Consumer Brands president, she helped lead the subsidiary to improved profitability and helped it achieve significant market-share gains, the company said in a news release. Schwan's Consumer Brands, which also encompasses the Mrs. Smith's, Bibigo and Pagoda frozen-food labels, among others, focuses on distribution of its branded snack, dessert and entree product lines to retail grocers and club stores.

In her new role, Francis will continue to report to Schwan's CEO Dimitrios Smyrnios and will lead management teams for Schwan’s Consumer Brands, Schwan’s Food Service Inc. and SFC Global Supply Chain. Inc. Smyrnios, in the news release, referenced Francis's more than 25 years of food and beverage industry experience and said her expertise "has helped deliver outstanding results for our business and customers."

Schiegg is a new addition to Schwan's, joining the company from Ocean Spray International Services, where he was president and COO. He also previously held leadership roles at Mars Inc.

In August, Schwan's announced a 400,000-square-foot expansion of of its pizza production plant in Salina, Kan., where the company has been producing pizzas for 50 years. The company is currently running an Instagram contest through its Red Baron brand, tying in Sunday's end of the football season with National Pizza Day on Feb. 9 to offer 55 people free Red Baron pizza for a year.