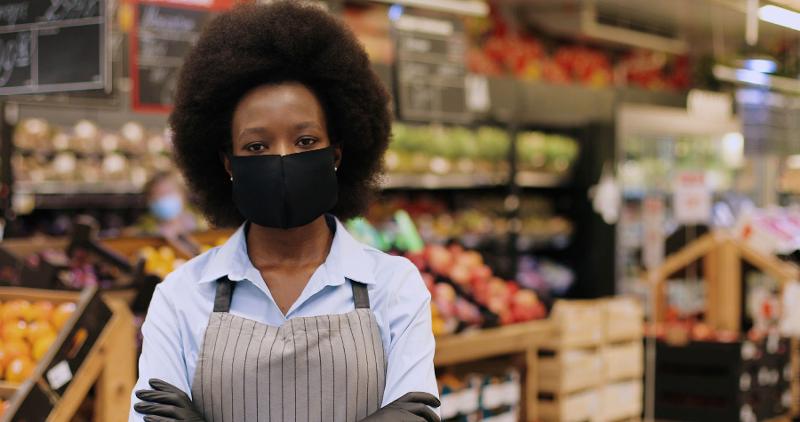 As the pandemic continues and grocery workers continue to face elevated health risks at work, groundbreaking new hazard pay ordinances in California and Seattle mark the first time such policies have been government-mandated, rather than government-funded or voluntarily employer-provided, notes a new study from the Brookings Institution, a Washington, D.C.-based nonprofit public policy organization.

“Buoyed by the United Food and Commercial Workers International Union’s organizing efforts, several city and county governments across California and in Seattle have just passed mandates requiring some large grocery, food retail, and pharmacy employers to provide their workers hazard pay—a trend that may (and should) expand to other communities across the country,” says Brookings.

The report titled, Windfall Profits and Deadly Risks: How the Biggest Retail Companies are Compensating Essential Workers During the COVID-19 Pandemic, examines “this inequality from two perspectives,” says the Brookings Institution. “As frontline retail workers at top companies face unprecedented risks on the job, what compensation should they earn, and what have they earned so far during the pandemic? And as those large retail companies earn unprecedented profits, how have they balanced investing in their workers and their profits?”

Brookings Institution found that with few exceptions, most retailers “are sharing little of their windfall with the frontline essential workers who are risking the most.”

But now a growing number of cities and counties are taking hazard pay matters into the government’s hands, mandating compensation increases for frontline workers, finds the report. On Jan. 12, 2021 the city council in Santa Monica, Calif., approved a $5 per hour hero pay bump for grocery workers at large employers. On Jan. 25, the Seattle City Council unanimously passed a similar mandate requiring certain large grocery and food retail businesses with at least 500 employees globally to pay a $4 per hour hazard pay increase for workers.

“The actions taken to protect frontline essential workers in California and Seattle are just the beginning,” said UFCW International President Marc Perrone in a statement. “For the sake of public and worker safety, we are urging all elected leaders to take action and join this critical effort to compensate workers who continue to face these daily risks.

The UFCW, which has represented frontline food workers during the pandemic, continues to report on COVID-19’s impact on the union’s essential workers, confirming there have been at least 124 grocery worker deaths and 25,760 grocery workers infected or exposed. Across all the industries UFCW represents, the union has reported there have been at least 374 frontline worker deaths and over 69,900 frontline workers infected or exposed.