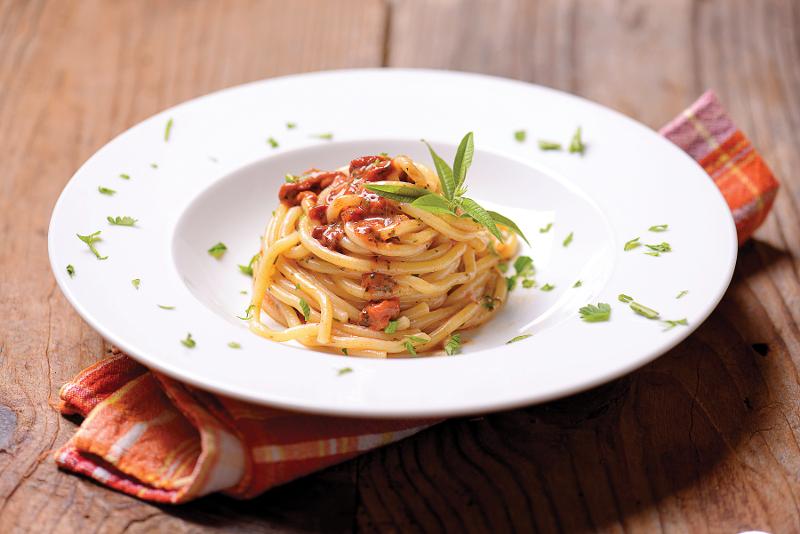 So began a classic, 1970s-era television commercial making note of the fact that in Boston’s Italian North End, Wednesday is Prince Spaghetti Day. After hearing his mother’s shouts from a second-floor apartment window, 12-year-old Anthony hightailed it home to a family-style bowl of Prince spaghetti for dinner.

Times have certainly changed. For starters, pasta is no longer considered an “ethnic” Italian dish, but is now mainstream. Today, there are fewer stay-at-home moms with the time to spend an entire afternoon slaving over a stove making a multi-course pasta feast. Plus, more and more consumers are counting carbs, watching calories, and trying to eat lighter and healthier.

Pasta manufacturers have listened, developing products made with vegetables, beans, ancient grains and other heart-healthy, high-protein, high-fiber ingredients. They have also created pastas that are easier to prepare, saving always-on-the-run consumers valuable time in the kitchen.

For example, Prince—now a brand of Harrisburg, Pa.-based New World Pasta Company—has a line of Quick Cook elbows, penne rigate and rotini that cook up in only three minutes.

Market leader Barilla North America is touting a “Good for You, Good for the Planet” platform that was developed by the Barilla Center for Food & Nutrition (BCFN) Foundation in 2009. It features a “double pyramid” showcasing the benefits of the Mediterranean Diet alongside an inverted environmental pyramid touting the lower carbon footprint that a diet rich in pasta has compared to other foods in terms of the energy, water and land resources they take to produce.

“Good for the Planet means to continue to reduce the environmental impact from field-to-fork, in particular with regard to greenhouse gas emissions and consumption of water resources in production plants,” says Frank Spear Jr., national retail operations manager at Barilla America, based in Northbrook, Ill. Barilla is investing significant resources in increasing category consideration among Millennials, most recently with a web series where YouTube star Hannah Hart of My Drunk Kitchen dishes about life, passion and pasta with celebrity pals like Bill Nye, Rachel Zoe, Wanda Sykes and others.

That tactic, among others, appears to be paying off. According to IRI, a Chicago-based market research firm, for the 52-weeks ended Oct. 2, the pasta category had sales of $2.2 billion, up 1.1 percent. Excluding noodles, sales were $1.9 billion, up 0.6 percent, with unit sales of more than 1.4 billion packages, up 1.1 percent.

“Convenience hunters under index in dry pasta, typically turning to frozen as stove top is viewed as inconvenient,” says Spear. “Our convenience initiative, Pronto, is a stove top option that simplifies the cooking process using cooking shortcuts. We offer five different cut varieties within this portfolio, and Pronto was a recipient of the Better Home and Garden’s Best New Product Award 2016.”

Barilla has taken convenience a minute closer with Ready Pasta, a four SKU-line microwavable line that is ready in 60 seconds. “Ready Pasta is all-natural with no preservatives and made with three simple non-GMO ingredients—fully cooked pasta, a touch of olive oil and dash of sea salt,” Spear says.

A downside of traditional pasta is that it is rich in gluten, a problem for consumers with celiac disease and others who simply view gluten as not being healthy. Several manufacturers have addressed this issue by coming out with gluten-free quinoa-based pastas.

“The color is slightly darker than a standard pasta, while the taste and texture are similar, but still unique to quinoa pasta,” says Brett Fuss, international brand director at Pereg Natural Foods, based in Clifton, N.J. “Our cooking time is six minutes for a great al dente texture, but if overcooked, quinoa pasta starts to get very soggy like other gluten-free pastas.”

Fuss suggests retailers merchandise quinoa pasta alongside other pastas to also attract those not necessarily on a gluten-free diet but still looking to try something different.

NOW Foods has a line of pasta made with organic quinoa, amaranth and rice under its gluten-free/allergy-friendly Living Now brand. “A lot of other quinoa pastas on the market have corn and that gives kind of a weird texture to it, making it a little gummy, and it doesn’t hold up well overnight,” says David Rosenberg, food category manager at NOW Foods, based in Bloomingdale, Ill.

A bonus is that Living Now pasta offers more protein than does wheat pasta, Rosenberg says. “It is a really nice option for a lot of people because you don’t have to be gluten-intolerant to enjoy it,” he says.

Retailing for $4.99 per 8-ounce box, Living Now is also wrapped in cellophane to eliminate the possibility of cross-contamination when merchandised next to traditional wheat pastas on the shelf. “If you have a wheat pasta and a gluten-free pasta right next to each other that are just thrown into a box then you are opening yourself up to a lot of issues,” Rosenberg says.

Consumers looking to expand their pasta palates might look to Explore Cuisine, a manufacturer of organic plant-based pastas based in Red Bank, N.J. “Our top seller is our Black Bean Spaghetti, made with a single ingredient—organic black beans—and offering 25 grams of protein in a 2-ounce serving,” says Erika Wasserman, vice president, marketing. “So a box has 100-grams of protein in it. That just transforms pasta. We made pasta not only taste great, but be healthy, nutritious and delicious.”

According to Aileen Magnotto, president/founder of Magnoodles Smart Pasta, based in Hermitage, Pa., the gluten-free phenomenon has peaked and consumers are starting to turn back toward better-tasting gluten lines.

Magnotto began making commercial pasta in 1999 when she invested in a pasta machine and started selling homemade pasta in Magnotto’s Shop ‘n Save, the supermarket her family owned in Hermitage. “I used to make pasta for my children when they were little and their friends called me Mrs. Magnoodles,” she says.

“What makes my product unique is that it is a blend of three whole grains—whole grain spelt, whole grain Kamut (khorasan) and whole grain durum—blended with organic semolina, so it acts, cooks and tastes like white pasta, rather than the cardboard-tasting whole grain pastas,” she says. Magnoodles penne and shells are also made with vegetables, containing a mix of powdered tomatoes, carrots, spinach and beets in the flour. “Some people say that makes it a little bit sweeter,” she says.