Today’s consumers are looking for myriad meal solutions, and that includes scores of side dishes from traditional to healthful to globally inspired creations. They also want them flavorful and fast, with multiple purchase options from which to choose—including grab-and-go, ready-to-eat and ready-to-heat—as well as full-service deli offerings.

“Side dishes play an important role in connecting with today’s shoppers, who are looking for prepared foods,” says Eric Richard, education coordinator for the International Dairy Deli Bakery Association (IDDBA), Madison, Wis. “It’s really important for supermarkets to know what their consumers want in terms of different flavors and tastes from their prepared foods.”

At Boulder, Colo.-based Alfalfa’s Market—which bills itself as a “marketplace where products that are good for people, for producers and the planet are celebrated”—a wide variety of seasonal side dishes play a key role in satisfying customer demand for meal solutions.

Since 2014, Alfalfa’s two Colorado locations have offered 7 Days, 7 Meals for $7. Every day of the week, shoppers can pick up a steal of a meal deal for just $7 and take it to go or eat in the in-store cafe. Monday’s $7 Market Plate is a 6-ounce protein with two sides (hot or cold), while on Thursdays the stores regularly sell out of rotisserie chickens for $7.

“The response has been tremendous,” says Chris Epp, director of marketing for Alfalfa’s. “It’s all about creating dinner solutions, and grab-and-go certainly makes it easier.”

Alfalfa’s has about 200 seasonally influenced recipes in its playbook. “We try to elevate our sides beyond coleslaw and potato salad,” Epp says. “Our customers always expect healthy and quick side dishes, vegetarian and gluten-free options, but they also want dishes that are more inspired.”

Richard agrees: “More and more consumers want to try new foods, and that gives supermarkets a lot of new opportunity to move beyond mac and cheese and other standard sides and be more creative in what they do.”

Two of Alfalfa’s best-selling sides are its quinoa, beet and arugula salad, which Epp says “is always flying off the shelf,” and its Boulder Power Slaw, “an elevated coleslaw” made with kale and apples. Alfalfa’s foodservice offerings include a soup bar with 10 different soups at any given time, a salad bar, cold deli case, hot food bar, pizza station, sandwich menu, breakfast menu, grab-and-go selection and a full catering menu. 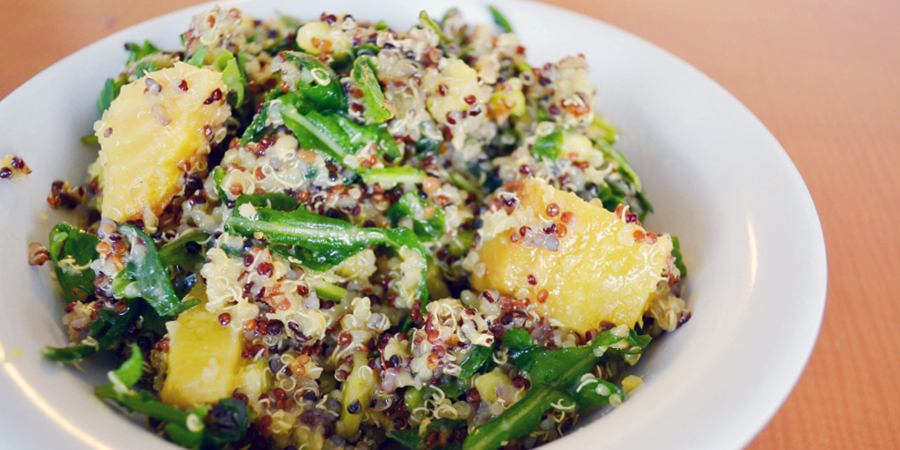 Offering options for shoppers with alternative diets is also critical to Alfalfa’s successful side dish business. “We cater to vegetarians and vegans, as well as people on keto and paleo diets. We try to have offerings for all,” Epp says.

Shoppers who miss the Monday Market Plate shopping experience can build their own meals every day of the week by ordering a protein and two sides for the regular price of $8.99 per pound.

“Supermarket spending is at an all time high, but so is consumption of food outside the home,” says Richard, who points out that in this competitive climate, it’s critical for supermarkets to stay ahead of foodservice trends and give shoppers what they crave most. Two trends that are resonating with shoppers across all demographics are local and plant-based proteins. “It’s typical consumers who are pushing the plant-based protein trend rather than vegetarians,” Richard says. “This is a perfect opportunity for supermarket delis to create different dishes to connect to those consumers.”

Trending alongside plant-based proteins are plant-based alternatives to carbs, such as cauliflower rice, and veggie noodles in a variety of formats including carrots, beets, kohlrabi, zucchini and other squash.

Customer appeal is even stronger if that plant-based dish is made with locally grown ingredients. All of Alfalfa’s prepared foods are made in-house and using only organic vegetables, grains, oils, pastas and milk, as well as all-natural meats and seafood. It also works with local farmers as much as possible within season.

“Overall, the consumer’s shopping pattern is focused on local and transparency,” says Richard, who adds that using and promoting local produce in side dishes is crucial to success. “It’s really a way to connect with the consumer, especially if someone is just walking through the deli and they see a sign calling out ‘local.’ More important than the side dishes themselves is the messaging that goes along with them.”

When messaged and marketed effectively through social media, websites and in-store, supermarkets are in a great position to be a destination for dinner, Richard says. “If local can be incorporated into prepared foods and deli, it will bring a lot of people into those areas of the store,” he says.

When it comes to the format shoppers prefer when making a foodservice purchase from a supermarket, the short answer is that they want choices.

“Ready-to-eat hot and cold dishes and ready-to-heat dishes are all popular,” Richard says. “The majority of today’s households have two people. They’re looking for something they can grab quickly. They also want the deli counter, but with the ability to pick up and be on their way.”

At Alfalfa’s two Colorado stores, Epp finds that sales are fairly equal in terms of takeout and dine-in, with its suburban Louisville store ringing slightly more dine-in and its Boulder store scoring a bigger lunch rush. “It depends on the demographic of folks we’re serving,” Epp says. “Our more urban store has more singles who want to grab something and bring it home, while our suburban store attracts larger-basket shoppers who tend to make more food from scratch or just make their protein and grab a couple of premade sides to complete the meal.”

Variety is tremendously important, as are go-to traditional side dishes year-round. “Mac and cheese and mashed potatoes are always in the hot case,” Epp says. “They both sell well.” And while the holiday season from Thanksgiving through New Year’s are filled with nostalgic food traditions, Alfalfa’s celebrates the season with an expanded menu of inspired sides.

“We see a huge increase in holiday sides in November and have been seeing good year-over-year sales of elevated holiday sides,” says Epp, who points to Alfalfa’s Goat Cheese Cauliflower Casserole and Sweet Potato and Bacon Gratin as standouts from a sales perspective. “These are hot sides that grandma didn’t make.”

Reser’s new “Cuttable” Baked Macaroni and Cheese is a fully baked casserole of real cheddar cheese and elbow macaroni with a golden-brown top. It can be served in the hot case, cut into portioned squares and sold through the cold case or repacked for grab-and-go. The side dish supplier’s other on-trend sides for retail foodservice include Tri-Color Roasted Potatoes; Roasted Tomato Quinoa Salad Kit; Vietnamese Rice Noodle Salad Kit; Sunset Butternut Squash Salad made from spiralized butternut squash noodles; and Deviled Egg Cauliflower Salad, which replaces potatoes with diced and blanched cauliflower.

Whether it’s a flavorful and exciting preparation for butternut squash noodles or veggie rice enhanced with Southwestern flavors, RFG chefs are continuously innovating to meet the demand of today’s consumer.