In the age of “what’s next,” it’s ironic that a portable prepared-foods item that debuted more than 250 years ago remains today’s most popular retail foodservice menu mainstay. We’re talking about the sandwich, of course, and all its delicious iterations, from wraps to subs, grinders and a classic Reuben on rye.

“Sandwiches and wraps continue to dominate both grocer/mass merchant and c-store menus,” according to the foodservice data experts at Chicago-based Technomic, a WGB sister company. “Their portability and customizability make them a preferred choice among customers, and easy preparation is appealing to operators.”

Retail foodservice purchases are on the rise across the board, reports Technomic, with 66% of consumers purchasing prepared foods from retail at least three times per month, up from 55% in 2017. Overall, entrees have had the most growth on menus in recent years, with sandwiches/wraps leading.

In a cross-category look at the top and fastest-growing items in retail foodservice—including entrees, sides and beverages—sandwiches/wraps are driving growth at 100% of the 22 grocery/mass merchants polled in Technomic’s recent Retail Foodservice Category Menu Insights report. Technomic further found that while turkey, chicken, roast beef and ham are the most frequently offered sandwiches, grocers, mass merchants and c-store operators are adding more ethnic options to meet the growing consumer demand for global flavors.

Quality ingredients and more vegetarian and vegan options also resonate with retail foodservice customers. When it comes to sandwich menu trends, Technomic reports that 66% of consumers say fresh ingredients are most important when deciding on a sandwich, and 30% of millennials would like restaurants to offer more plant-based protein sandwiches.

The mouthwatering made-to-order sandwich menu at Southern California-based Frazier Farms Market is on-trend with quality and inspired international offerings, including a seared ahi sandwich with Asian slaw, a Thai pork meatball banh mi and a Frazier’s Cubano. Frazier Farms’ menu also features a vegan option, traditional sandwiches such as a club and Reuben, as well as a customizable breakfast egg sandwich to meet the demand of this increasingly growing daypart.

Technomic finds that 62% of purchasers of prepared foods buy breakfast from retail foodservice at least once a month, up from 56% in 2017.

While sandwiches are already easy to consume on the go, a growing number of retailers are making deli purchases even more convenient by offering delivery, or at least the ability for shoppers to order ahead online and pick up in-store. “Moving forward, look for prepared-foods delivery occasions to grow in step with grocery delivery,” says Technomic, which finds that about one-third of consumers say they would be likely to use delivery for orders of prepared foods.

Last year, Lakeland, Fla.-based Publix began offering free delivery of its popular “Pub Subs” through Instacart. Shoppers choose from a menu that includes the Publix Deli Cuban Sub, Deli Ham Sub, Veggie Sub and more. They can then customize their sandwich by selecting the bread, cheese and toppings.

Wegmans of Rochester, N.Y., offers DoorDash delivery of its sandwiches, including a create-you-own sub or wrap (with a gluten-free roll option), as well as a menu of customer favorites such as Reuben, Traditional Turkey and Meatball Parm. A $20 order minimum is required.

Building on its efforts to make it easy for families to “discover the joy of food every day,” Target’s new partnership offers a variety of Boar’s Head sandwiches, salads and snacks, as well as prepackaged premium deli meats and entertaining specialty cheeses ranging from $2.99 to $8.99.

Minneapolis-based Target began testing the Boar’s Head grab-and-go areas in November at six stores across New York City. The sets feature 50 to 200 items from Boar’s Head, with approximately 20 different varieties of sandwiches, wraps, and paninis. Initial response to the launch has been so positive that Target plans to expand the concept to up to 200 additional stores by the end of the year. 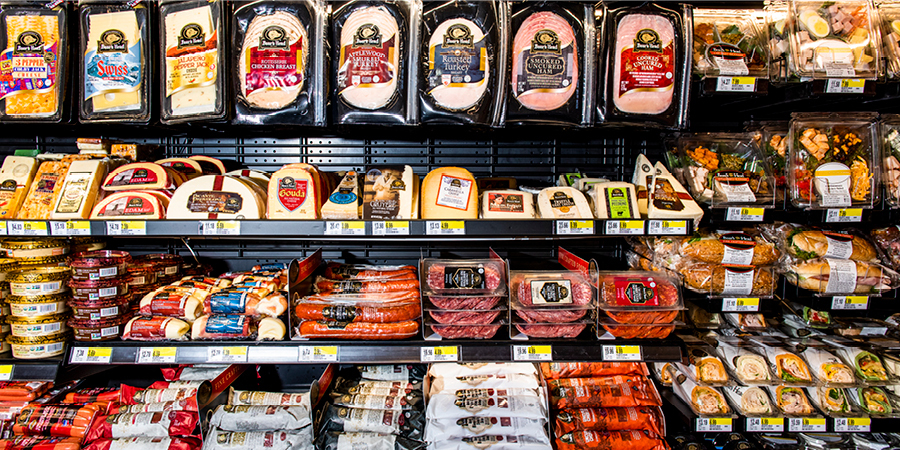 “As with the rest of our assortment, our approach to food and beverage starts with a focus on our guests and an understanding of what they want and need from Target,” says Angie Thompson, spokeswoman for Target. “We continue to hear that they’re looking for great, convenient grab-and-go food options.”

“Product assortment will vary based on location,” Thompson says. “We’ll continue to stay close to guests’ tastes as we work hand in hand with Boar’s Head to fine-tune our assortment.”

If customer reaction to the initial launch is any indication, Target has hit the bull’s-eye with its Boar’s Head grab-and-go sets.

“Guest response to our initial store rollout has been incredibly positive, with sales exceeding expectations,” Thompson says. “As we roll out offerings to additional stores, we think our guests will love the convenience of getting high-quality, delicious and fresh grab-and-go deli items on their Target run.”