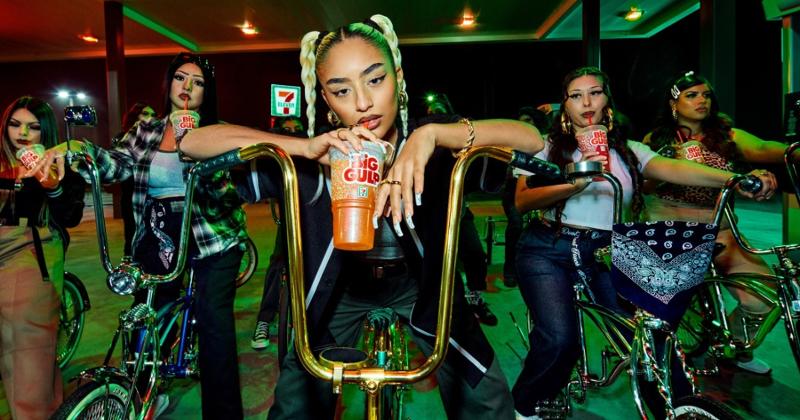 7-Eleven has launched a new brand campaign developed with creative and media agency 360i. Harmony Korine, the creative force behind "Kids," "Spring Breakers" and Gucci collaborations, directed the campaign, known as "Take it to Eleven."

According to the company, the “full-funnel,” multichannel integrated campaign “embraces an attitude that makes a big deal out of even the smallest of things; it’s full of youthful energy and zeal, all against the backdrop of a 7-Eleven parking lot—a stage where everyone, every subculture, is always welcome to be themselves.”

The convenience-store chain has more than doubled its marketing investment in 2021, it said. 7-Eleven plans to spend more than $70 million this year on the campaign, said the Wall Street Journal, citing to a person familiar with the effort.

The pandemic attracted customers to the convenience-store category, and the company commissioned research that revealed that consumers saw the brand as the “ingenious accomplice” amid the unpredictability of life.

7-Eleven said it understands that there’s more to life than surviving. Convenience is no longer the differentiator it once was among competitive retail channels.

“Particularly in times like these … it can be easy to overlook the small things that bring us joy,” the company said. “That’s why the brand has always gone out of its way to bring a little delight, a little fun, a little off-the wall, playful indulgence to everyone that it serves. That’s not just fueled by people’s physical needs. It’s about lifting peoples’ spirits, feeding their optimism and keeping them amused. The brand’s new tagline, ‘Take it to Eleven,’ is born of the notion that 7-Eleven has always been a brand with customer-obsession at the core, going over the top to feed people’s joy and always meeting them where they are by offering small delights that are a bright spot in the day.”

Based in Irving, Texas, 7-Eleven Inc. operates, franchises or licenses more than 72,800 stores in 17 countries, including 12,000 in North America.

A version of this story appeared previously at CSP Daily News, a WGB sister site.