Albertsons Cos. has found its leader for the future.

Vivek Sankaran, CEO of PepsiCo Foods North America, has been appointed president and CEO of Albertsons Cos., effective April 25. He will succeed Jim Donald, who will become co-chairman along with Leonard Laufer, a technology-focused executive of majority owner Cerberus Capital Management who is currently serving on Albertsons’ board. Robert Miller, Albertsons’ longtime leader and chairman, will continue to serve the board in a new role as chairman emeritus. 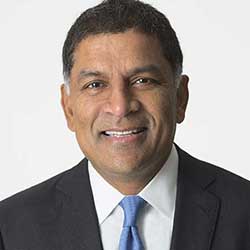 The appointment of Sankaran, 56, represents a seasoned but relatively young leader to a company that has been pursuing a long-term leadership succession for some time. Donald was brought out of retirement in March 2018 as COO and succeeded Miller as CEO that September. Albertsons had planned to turn over Miller’s seat to Rite Aid CEO John Standley as part of a planned deal with the drugstore operator, but those plans were scuttled when the proposed deal fell through over the summer of 2018.

Sankaran brings a background in CPG and technology to a company with a solid foundation in grocery in the midst of a transition to omnichannel. He was named CEO of PepsiCo Foods North America in December after three years as its president and COO. Over that period, he led Frito-Lay to industry-leading growth by remaining focused on innovation, technology and execution, Albertsons said.

“Vivek brings a rare blend of CPG, retail, manufacturing, logistics, technology, and research and development to Albertsons, all of which are key components to being a successful retailer in an omnichannel-driven environment,” Donald said in a statement. “Moreover, Vivek has the keen understanding that the front line is directly linked to the bottom line, and I'm confident he will inspire and engage our 270,000 associates across our stores, support offices, manufacturing facilities and distribution centers.”

Added Miller: “I’ve known Vivek for many years. He has always impressed me, not only with his exceptional work at Frito-Lay in managing the many facets of a multibillion-dollar food business, but also with his ability to work with and develop people. I couldn’t be happier to leave AlbertsonsCos. in Vivek’s hands.”

Under Donald, Albertsons continued expanding omnichannel efforts in click-and-collect and grocery delivery, while a focus on sales and service in stores resulted in improved financial performance. Over its most recently reported results, the 40 weeks ended Dec. 1, sales were up 1.4% and nonfuel comparable store sales improved by 0.9%. In the 12-week third quarter ended Dec. 1, comps swung from a 1.8% decline to a 1.9% gain and profit margins were up.

“When I joined Albertsons in 2018, I found a company that had a strong decentralized operating model, a fantastic leadership team and incredible potential to be the four-walls and no-walls leader in the grocery industry,” Donald said in a statement. “Over the past year, our team made our company’s nearly 2,300 stores even stronger as we sharpened our focus on the intersection of technology and service. I’m looking forward to the continued progress of the company under the seasoned leadership of Vivek. We continue to be well-positioned to serve the evolving needs of today’s customer, where, how and when they choose to shop with us.”

Over a 10-year career at PepsiCo, in addition to leading Frito-Lay, Sankaran also was chief commercial officer of PepsiCo North America, chief customer officer of Frito-Lay and SVP of strategy for PepsiCo. Before joining Pepsi in 2009, Sankaran was a partner at McKinsey and Co., where he served various Fortune 100 companies, bringing a strong focus on strategy and operations. Sankaran has an MBA from the University of Michigan, a master's degree in manufacturing from the Georgia Institute of Technology and a bachelor's degree in mechanical engineering from the Indian Institute of Technology in Chennai.

“It is a great privilege to join a company that has such deep roots in American retail,”  Sankara said in a statement. “Albertsons, Safeway, Vons, Jewel Osco, Shaw's, Acme, Tom Thumb, Randall’s, United Supermarkets, Market Street, Pavilions, Star Market, Haggen and Carrs—all of these banners and more in the Albertsons family of stores have hundreds of years of combined history. Our stores are integral to the lives of millions of customers each week. I’m excited to build on the legacies of past CEOs Bob Miller and Jim Donald, who both laid a solid foundation for success, and look forward to working with our associates to realize the opportunities and navigate the challenges in our evolving industry.”

Laufer, who was appointed to the Albertsons board of directors in October and is now board co-chairman alongside Donald, is a senior managing director and head of transformation and technology for Cerberus Capital Management. In this capacity, he leads Cerberus Technology Solutions, a subsidiary of Cerberus focused exclusively on leveraging emerging technology, data and advanced analytics to drive business transformations.

Cerberus is the longtime private equity owner of Albertsons.

Prior to joining Cerberus, Laufer had launched and was the head of JPMorgan Intelligent Solutions, a unit of JPMorgan Chase & Co. created to solve business problems and provide strategic insights through data mining, analytics and modeling. Prior to JPMorgan Chase & Co., Laufer co-founded and was CEO of Argus Information and Advisory Services, which was sold in 2012 to Verisk Analytics. Laufer successfully grew Argus into the leading provider of pricing, risk and behavioral data to the credit card industry.

Laufer is a graduate of Harvard University, and he received an MBA from the Wharton School of Business at the University of Pennsylvania.