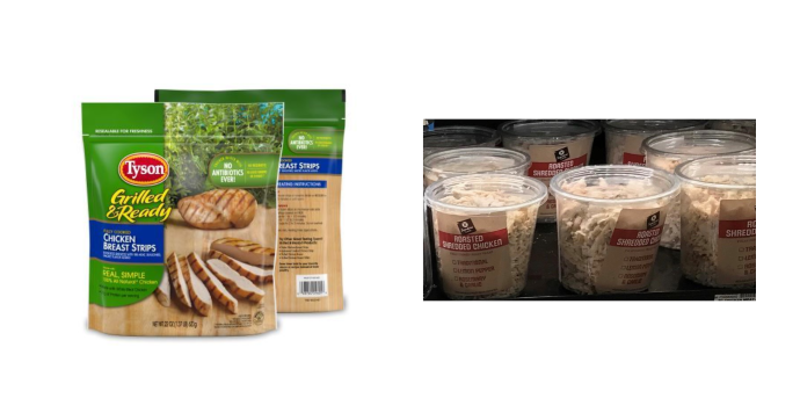 Albertsons Cos. is expanding its recall of Tyson chicken products in the wake of three listeria illnesses, including one death, possibly linked to precooked chicken items produced at a Tyson facility in Missouri.

Tyson and the U.S. Department of Agriculture separately announced July 3 the initial product recall, which affects about 8.5 million pounds of frozen precooked chicken shipped to grocery stores, restaurants and other foodservice venues nationwide. The recalled products include Tyson-branded and retail private-label products made at Tyson's Dexter, Mo., plant between Dec. 26, 2020, and April 13, 2021. A full list of the recalled items can be found on the USDA's website.

On July 7, Albertsons announced it was expanding its recall to include several grab-and-go items—specifically, chicken pesto focaccia whole pizzas and slices, barbecue chicken pizza and shredded chicken—containing affected Tyson chicken products. The prepared foods were sold in Safeway and Acme stores in Connecticut, Delaware, Maryland, New Jersey, New York, Pennsylvania, Virginia and Washington D.C., according to an Albertsons news release. No listeria-related illnesses have been reported in conjunction with the sale or consumption of the newly recalled items.

The investigation that prompted Tyson's recall began after the USDA's Food Safety and Inspection Service (FSIS) received word of two listeria illnesses on June 9. Working with the Centers for Disease Control and Prevention and state public health officials, FSIS found evidence linking the illnesses to Tyson precooked chicken products. Two persons became ill and an additional individual died from listeria infection between April 6 and June 5, according to the USDA.

Springdale, Ark.-based Tyson issued its voluntary recall "out of an abundance of caution," the company stated on July 3. Beyond Albertsons, Kroger, Publix, Target, Walmart and Wegmans are among the retailers that received the now-recalled products.