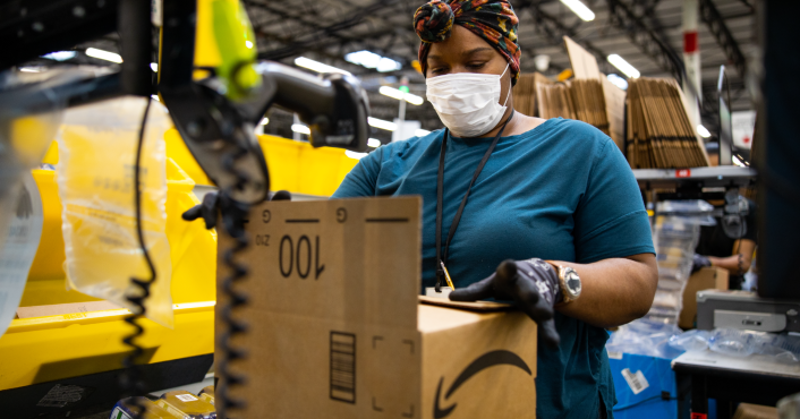 Amazon is offering signing bonuses of as much as $3,000 as it looks to hire 150,000 seasonal associates across the U.S.

The Seattle-based retail giant, which lifted its minimum wage to $15 an hour in 2018, touted in a news release that all of its U.S. jobs, including seasonal roles, also now have an average starting wage of $18 an hour. An additional $3 per hour, depending on the shift, will be available in many locations, according to the company.

"Joining Amazon in one of our seasonal roles offers high-paying part-time work or a path to a full-time position, with benefits like our Career Choice program to help people advance their education and careers within Amazon or beyond," said Alicia Boler Davis, Amazon SVP of global customer fulfillment, in a news release.

New seasonal part-time workers will support full-time employees at more than 250 U.S. fulfillment centers, sortation centers, regional air hubs and delivery stations that opened in 2021, according to the company. Amazon listed 20 states—including Arizona, Colorado, Indiana, Tennessee and Virginia—with thousands of seasonal roles available. (Not included: Alabama, where Amazon workers at a fulfillment center in Bessemer voted against unionization in a much-watched labor battle in April.)

See also: Does Amazon Have a PR Problem?

Amazon's announcement of its seasonal hiring spree and its offer of multi-thousand-dollar signing bonuses follows big hiring announcements from the likes of Walmart, Target and Kroger. Walmart, which is seeking to hire 150,000 new store associates and 20,000 more supply-chain workers, emphasized in its announcement in late September that most of the in-store workers it's looking to bring on in the fourth quarter will be permanent rather than seasonal. Amazon's Bentonville, Ark.-based retail rival recently raised its minimum wage to $12 an hour, and the company's average U.S. hourly wage currently is $16.40, Walmart Chief People Officer Julie Murphy noted in September.

Last week, the Bureau of Labor Statistics reported that 4.7% of U.S. retail workers—some 721,000 people—had left their jobs in August. And while a relatively brisk pace of turnover is expected in retail, the share of workers quitting their jobs in August was up from in July (4.4%), June (4.2%) and May (3.9%). Grocery stores shed 12,300 jobs in September, according to the Bureau's separately released monthly jobs report. Couriers and messengers (aka delivery services), meanwhile, added 12,500 jobs. The warehousing and trucking sector added more than 15,000 jobs in September.

Amazon said in its news release that available seasonal roles in its operations network include stowing, picking, packing, shipping and beyond. "New hires will be fully trained, and all facilities follow strict COVID-19 health and safety protocols," the retailer stated.