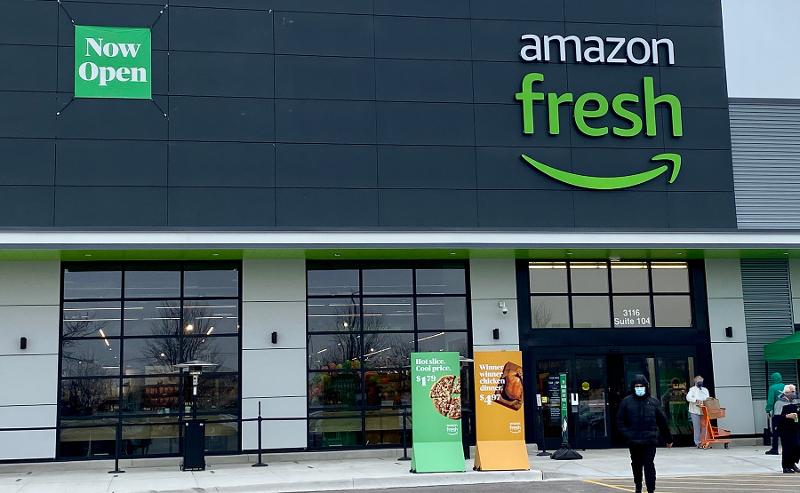 Jassy will become CEO of the Seattle-based company in the third quarter, at which point Bezos will take on the role of executive chairman of the board.

In describing Bezos’ new focus as executive chair at the teleconference, Chief Financial Officer Brian Olsavsky said, “[Jeff] will be involved in many large one-way-door issues, as we say, one-way doors—meaning the more important decisions. Things like acquisitions. Things like strategies and going into grocery.”

While Amazon’s current grocery position includes eight Amazon Fresh grocery stores in the U.S., with locations in Woodland Hills, Irvine, Ladera Heights, Northridge, North Hollywood and Whittier, Calif.; as well as stores in Naperville, and Schaumburg, Ill., (and a third Chicagoland location in Oak Lawn “opening soon”); along with two new Amazon Fresh stores planned for the Seattle area, some industry analysts believe Amazon’s goal is ultimately 2,000 grocery retail locations across the U.S., 750 of which would be Whole Foods Market stores and the balance Amazon Fresh.

However, with the rollout of new Amazon Fresh locations and the company’s other food retail concepts, it seems clear that technology will play as big a role in the future of Amazon’s grocery presence as the actual products on its shelves. Convenient checkout-less technology is a common theme among Amazon Fresh, Amazon Go Grocery and the approximately 25 Amazon Go stores.

During the conference, Dave Fildes, director of investor relations, said the Go Grocery format was “off to a good start,” adding there was “a lot of interest” in the technology behind it and Amazon Fresh grocery stores.

This includes “some innovative physical store grocery offerings like … Go and Fresh, some of which have some pretty cool self-checkout capabilities, and … the 'just walk out' technology qualities are really some interesting areas that are resonating with customers,” he continued. “I think [customers] appreciate that not just in times of maybe not wanting to have physical contact with everyone in the store, but just even beyond that, the general convenience of being able to move throughout the store and check out more efficiently than you otherwise would in a traditional retail environment,” said Fildes, adding the company is “excited to do more on that front.”

So where does the tech-focused, affordably priced Amazon grocery model leave the company’s Whole Foods Market, a brand known for its high product quality standards as much as its high prices?

“In a thriving sector like grocery, Whole Foods was among the few to face real and tangible struggles,” writes Ethan Chernofsky, VP of marketing for the foot traffic analytics firm Placer.ai, in the Placer Bytes blog. “The approach that gave it strength, a focus on urban areas and high-end products, turned into a significant obstacle as the pandemic raged.” Struggles aside, Chernofsky said, the brand somewhat bounced back in in the fourth quarter, with its average monthly visits down 18.7% year over year, vs. a 24.1% dip in traffic it witnessed in the third quarter.

Figures shared in the conference call tell a similar tale. Amazon's physical stores division, which consists mainly of Whole Foods but also includes Go, Fresh and a handful of Amazon-operated bookstores and gift outlets, saw sales decrease by 7% overall to $4 billion in the fourth quarter, which ended Jan. 31, and by 8% for the fiscal year. Those figures do not include sales fulfilled by stores but originating online, such as pickup and delivery, which were included as part of the company's booming online sales, which grew by 43% in the quarter and 46% for the year.

Amazon, which was recently identified as the top-ranked overall grocery brand by dunnhumby's Retailer Preference Index, really got into the grocery game with its June 2017 announcement that it would acquire Whole Foods Market for $13.7 billion.

The relationship between Whole Foods and Amazon, is one that Whole Foods Market CEO John Mackey described as a “happy marriage,” in a September 2020 interview with WGB. “Amazon’s customer-centered culture meshed so well with ours and now our customers get to enjoy lower prices and access new services such as grocery delivery and pickup. Team members benefited from Amazon’s decision to raise the minimum wage but also through the opportunity, which helps us hire and retain talent.”

But as this relationship matures, and Bezos assumes his new role, ostensibly more focused on grocery and outer space (through the company’s Blue Origin aerospace endeavors), will the billionaire on-track-to-become-a-trillionaire work the same magic with grocery that he did with books back in the '90s?

“Amazon clearly has its sights set on grocery and the key to its success may come down to understanding how different audiences engage with the different offerings under its umbrella,” Chernofsky told WGB. “Learning how to maximize Amazon Go alongside Amazon Fresh and Whole Foods, while simultaneously leveraging the unique advantages that each bring, will be critical to maximizing success in this sector.”