A Barclays stock analyst has downgraded the stocks of four prominent food retailing businesses that benefitted from pandemic trends in 2020, anticipating that they will encounter challenges meeting year-on-year sales comparisons, and will require significant price investments to compete that will stress their cost structures.

Writing in a note to clients Jan. 7, Karen Short noted that her outlook for retailers The Kroger Co. and Albertsons Cos., along with wholesalers United Natural Foods and SpartanNash—all of which were downgraded to “underweight," or below its benchmark index, from equal weight—and Sprouts Farmers Markets—which received an underweight Barclays rating in July—don’t necessarily portend downside ahead but rather that “there is limited upside potential and believe all five will remain range-bound for the foreseeable future.”

The calls came as part of a research report examining the relative “stickiness” or “slipperiness” of COVID-influenced shopping—a phenomenon Barclays projects would vary between retailers it analyzes. The five vulnerable companies above experienced soaring sales and profits in 2020, and considerable cash, but those benefits came without accompanying gains in household share, Short posited. That’s an indication that changing consumer behavior during the pandemic—particularly, a decline in price sensitivity that contributed to higher rings on fewer trips as supermarkets absorbed billions in sales dollars that might otherwise have to restaurants—could be transitory when COVID trends reverse. 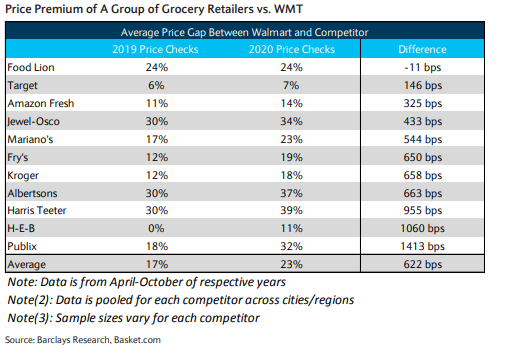 This contrasts to a degree with a handful of retailers that Barclays projects would have better relative “stickiness,” including Dollar General, Costco, Walmart and Target. These companies will be better positioned to withstand a transition to a “new normal,” the report noted, in part because they owe less to seemingly transient pandemic benefits.

Gaps Have to Narrow

Barclays’ outlook for Kroger and Albertsons is something of a gloomier take on contentions by the leaders of the respective companies, who in public remarks have acknowledged they are in for difficult sales comparisons in the coming months while maintaining that new consumer shopping habits will be difficult to break.

Both companies will need to address what Barclays called an “unsustainable” trend of a widening price gaps with Walmart. Figures included in the report showed a range of conventional supermarket brands showing considerably wider price gaps vs. Walmart between April and October 2019 and the same seven months this year. Included in that list was Kroger (12% in 2019 to 18% in 2020) and its Frys (12% to 19%) and Harris Teeter (30% to 39%) divisions; and Albertsons (30% to 37%) and its Jewel-Osco brand (30% to 34%). The average price gap between the 11 listed brands grew in that period from 17% to 23%, or what Barclays called “an all-time high.”

“These price gaps will have to narrow, in our view, as the pandemic potentially enters its later stages and consumers start to care about pricing once again,” Short wrote. This in turn will portend price deflation, which will wear further on comps, putting strain on the cost structures, and lead to gross margin erosion and risk of deleverage, particularly for Albertsons.

“While we certainly believe the conventional food retailers are strong operators, many are union operators, and as such, have limited ability to flex operating expenses in the face of declining sales,” Short wrote. Negative comps—which these retailers are certain to encounter as soon as next month—typically accompany flare-ups of irrational pricing behavior, risking wider pricing wars, she added.

Similar pressures will face grocery wholesalers SpartanNash and UNFI, as their retailing customers will be negatively impacted by the competitive landscape this year, Barclays predicts, and a disconnect between “unsustainable” 2020 sales gains and a lagging tonnage growth will come into further focus, Short wrote.

By contrast, competitors that may have realized less dramatic shifts in 2020, such as Walmart, Target and Dollar General, are in better shape for the coming months, in Barclays’ estimation.

Walmart, which saw nothing near the comp growth of its supermarket competitors last year, will benefit from better price positioning, easier sales comparisons, and benefits of progress in omnichannel, including growth of a new paid loyalty program.

Target’s momentum is relatively more sustainable in part because many of its nonfood competitors succumbed to the pandemic, but also to “superior execution and nimble merchandising, particularly in e-commerce, where [Target] is increasingly differentiating itself from the competition with its more profitable same-day services,” Short wrote. Target also has an opportunity to expanded food momentum with the addition of same-day fresh and frozen food to its popular pickup options.

Short also mentioned the possibility that large cash reserves generated by the historic year for essential retailers could lead to additional merger activity in the months ahead, but said it was most likely these deals would be of the “tuck-in” variety. Others could find acquisitions as a more efficient means to shore up deficiencies than developing them organically.