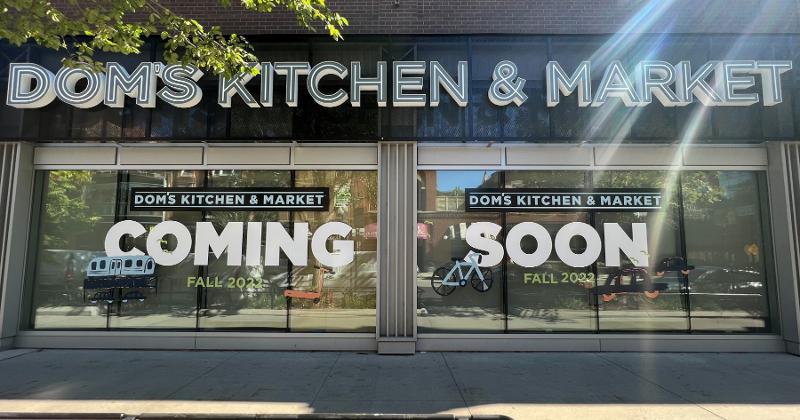 Dom’s, which debuted its brand in Chicago's Lincoln Park neighborhood at 2730 N. Halsted Street in June 2021, is on track with plans to expand to 15 stores by 2025, the retailer said.

Expansion outside Chicago is on Dom’s radar as well, according to Fitzgerald. "We have a map of areas that we identified in Chicago," Fitzgerald told WGB in March. "We want to continue to build in Chicago. We are also looking at suburban locations as well."

One such location was 1144 Lake Street in Oak Park, a Chicago suburb. But those plans are now off the table, according to a news release from the Village of Oak Park Friday.

Dom’s determined after completing detailed space plans that the two-story building did not work for its hybrid grocery concept, the village said.

Last month, the Village Board of Oak Park approved a sales tax rebate sharing agreement with Dom’s that was contingent on the pending lease discussions between Dom’s and the property owner, but the decision to not move forward with the plan nullifies the agreement, according to the statement.

Dom's second market will be in Chicago’s Old Town neighborhood. The 27,000-square-foot store is significantly larger than the 17,800-square-foot Lincoln Park location and will include thousands of curated products, many of which are globally inspired, seasonally driven and locally sourced from Chicago and Midwest entrepreneurs and purveyors, Dom's said in a statement. The new location will bring 180 jobs to the Old Town area, the release said.

“I personally take the selection and purchase of our Kitchen and Market offerings very seriously,” co-CEO Mariano said in a statement. “Dom’s continues to evolve based on our collective team efforts. We all work diligently to excite the hearts, minds and palettes of our loyal and new customers alike. Our work here is never done and we strive for excellence on a daily basis.”

A grocery store that touts itself as a hybrid of a kitchen and a market, Dom’s is looking to redefine the neighborhood market.

“At Dom’s, we are transforming the traditional grocery into a modern and holistic meal experience," co-CEO Fitzgerald said in a statement. "Our mission remains to offer our customers well-crafted, locally sourced, globally inspired food in an interactive environment of discovery and generous hospitality that connect people to the Old Town community and each other.”

“Our new Old Town location will serve as the hub for customer experience,” Owen, co-founder and chairman, said in a statement. “Dom’s will be your neighborhood table and a pillar in the communities in which we do business. Social responsibility is a cornerstone of the Dom’s culture and is essential to who we are as a business and as a neighbor. We push the boundaries and strive to be innovative from the experience we provide, to the ways in which we interact with our community members and organizations in need.”

A curated collection of products sourced locally and globally will be featured at the new store, as well as a series of kitchens with a wide selection of prepared meals, much like its Lincoln Park grocery store.

Aside from grocery essentials, the store will feature a wine libraryof old world and new world wines, local and global beers, seltzers, liquors, and a selection of over 300 cheeses with many from local award-winning and women-owned cheesemakers, Dom’s said.