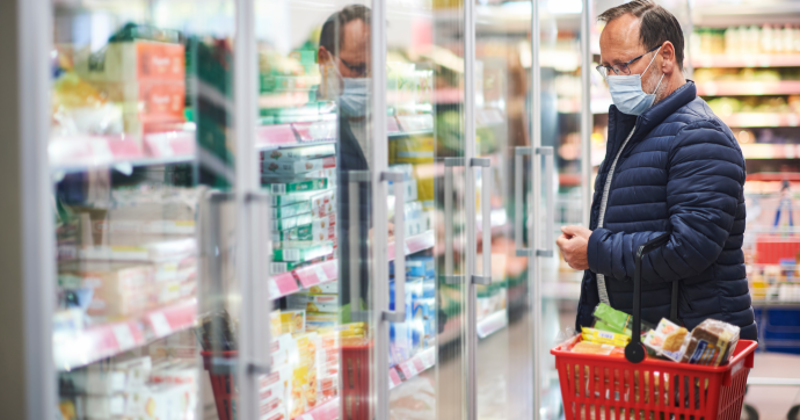 Thirty-one years: That's how long it has been since consumer prices rose, year over year, by as much as they did last month. Consumer prices were up 6.2% year over year in October, the largest increase since November 1990, the Bureau of Labor Statistics reported Wednesday.

That increase includes a 5.4% climb for food-at-home (grocery) prices year over year, with price hikes at the grocery store accelerating in the past two months: Both September and October saw month-over-month price increases of 1%-plus for food at home.

See also: 8% Inflation on Packaged Goods? What IRI Sees for the Year Ahead

The BLS called out rising food prices as a major contributor to October's head-turning inflation. "The monthly all-items seasonally adjusted increase was broad-based, with increases in the indexes for energy, shelter, food, used cars and trucks and new vehicles among the larger contributors," the bureau stated in a news release.

Once again, prices in all six major grocery categories rose for the month. "The index for meats, poultry, fish, and eggs continued to rise sharply, increasing 1.7% following a 2.2% increase in September," the bureau noted, adding that beef prices were up 3.1% from September to October alone. For the year, consumer prices for beef are up 20%, with prices for steaks up more than 24%.

Pork set a 30-year-record, as well: Pork prices at retail were up 14.1% year over year in October, with bacon prices up 20% and pork-chop prices up almost 16%. Market researcher IRI, in a webinar earlier this week, noted that consumers have begun to "trade down" to less-expensive brands and varieties of breakfast meats in the past quarter as prices in the category have risen.

And while meat captured most of October's double-digit increases in prices year over year, prices rose up and down grocery aisles. With holiday baking season approaching, prices for flour and flour mixes are up 5% from October 2020; sugar prices are up 5.2%; and egg prices are up 11.6%. Apple prices were up 6.7% year over year.

Game-watchers will find cracker prices 7.5% higher than they were a year ago and carbonated-drink prices 5.2% higher. Also, notably, baby-food prices were up nearly 8% year over year in October, including a 2.6% month-to-month increase from September.

And while food prices at schools continued to slide, prices recovered a bit, month over month, at offices: After falling 17% from July to August and more than 6% from August to September, prices at employee cafeterias and other office food venues were up 1.8% September to October. Wherever workers grab their lunch—at home, at a restaurant or from a cafeteria—it was more expensive to eat there in October.