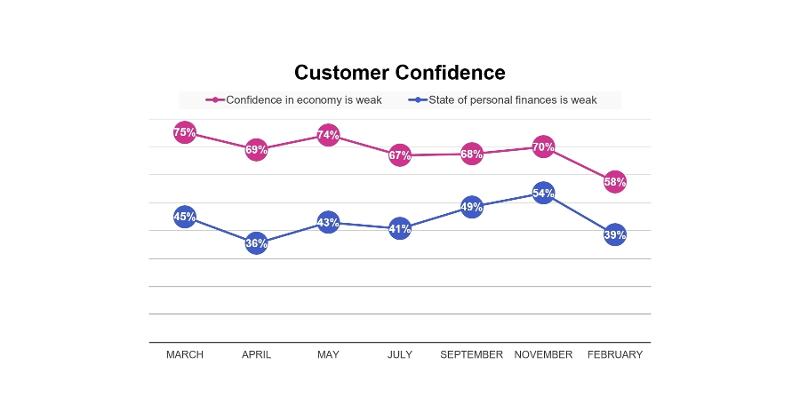 U.S. consumers are feeling better—not great, but better—about the economy and about their own finances, and that's having implications when they grocery shop, new data from dunnhumby finds.

Dunnhumby's latest data pulled from its yearlong Consumer Pulse Survey finds that 58% of U.S. consumers viewed the economy as weak in late February, down from the 75% who said so in November. In addition, the share of consumers who reported that their own finances were poor fell to 39% from November's 54%.

Notably, those surveyed reported their lowest level of worry about the novel coronavirus since the pandemic began. At the time the latest survey was conducted, the U.S. was averaging about 1.7 billion COVID-19 vaccinations a day; now, that number is more than 3 million a day.

Consumers more comfortable with heading to the grocery store—as well as with ordering groceries online—than they were at the outset of the pandemic also are turning more critical attention to how much they're spending on groceries, the survey indicated. Eighty percent of consumers said they're taking at least one action a week to seek value.

"While this wave marks the first time since the pandemic struck that consumers are feeling better financially, we are also seeing value-seeking driving shopping behavior,” Grant Steadman, president of North America for dunnhumby, said in a news release. "Consumers are now prioritizing value instead of speed, which was their key driver for much of 2020."

What does that value-seeking behavior look like? Most commonly, it means shopping with retailers that consumers perceive as offering everyday low prices: Fifty-two percent of respondents said they're shopping these retailers. Their top pick, far and away, for the grocery retailer that provides the best value is Walmart (33%). Kroger and Aldi follow (10%), and Amazon lands at No. 4 (6%).

Additional value-hunting tactics consumers are employing include buying certain brands only when they're on sale (36%), searching online for the best sales (34%) and choosing private brands when available (33%). More than 2 in 5 shoppers (43%) said they're paying more for food than they were before the pandemic.

Further, despite the choppiness retailers see for online ordering in 2021, consumers indicated that digital orders make up a greater share of their grocery purchases than they did a year ago. Shopping online (for pickup or delivery) accounted for an estimated 36% of consumers' grocery buying occasions in February, up from 23% in March 2020. Consumers also estimated that they placed 3.6 grocery orders online per week in February, up from 1.3 online orders weekly last March.