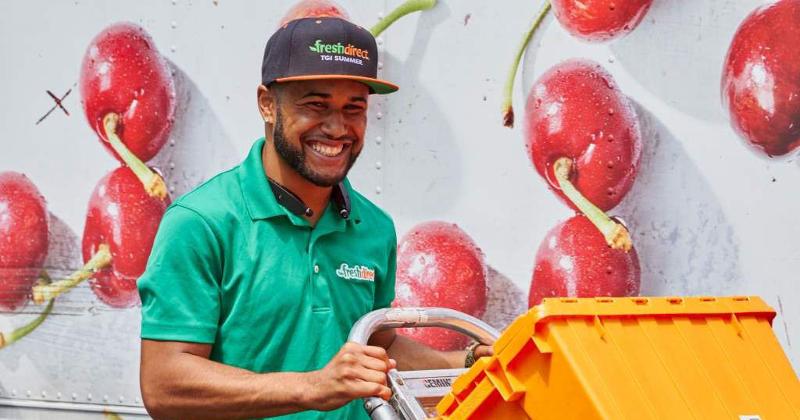 The coronavirus crisis provided a second opportunity for FreshDirect to exercise dormant advantages of a two-decade head start on competitors in grocery e-commerce, with the momentum generated by that event not only optimizing its revamped capacity but seeding progress in markets outside of its New York City stronghold, officials say.

In an interview with WGB, Scott Crawford, chief merchandising officer of FreshDirect, said the e-tailer’s state-of-the-art facility in the Bronx—which famously opened two years ago amid a spate of unexpected service glitches and an explosion in competition that saw the business reportedly go on the sales block—recovered from those setbacks in time to benefit from the onset of the pandemic in March, with sales both soaring and sustaining from new customers who found its service as a necessity, regular shoppers relying more heavily on it, and on geographic expansion powered in part by leveraging capacity, capability and technology advantages it might have missed two years ago.

“It’s no secret, it took us a little longer to get into this building than we had desired,” Crawford says. “But having gotten into this building, and really kind of stretching the legs on it before COVID, was really a blessing in disguise. As we saw the surge come, the building was ready. It was almost like we bought a house that had too many bedrooms. And then all of a sudden, we realized we had a lot of family.”

FreshDirect’s move to the Bronx was primarily designed to address having long reached maximum capacity at its founding facility a few miles away in Long Island City, a residential and commercial neighborhood in Queens, while enhancing an approach to e-commerce that has always been distinct from its brick-and-mortar and virtual competitors. The company sources and processes much of its own goods, strongly overindexes in fresh and primarily serves regular customers via scheduled deliveries by its own fleet. That’s helped to carve out an enviable base of wealthy, loyal shoppers in dense city locales that are relatively efficient to service, but historically proven difficult to export to new locations or to meet the growing opportunity to service customers who want food deliveries faster, many of whom are now relying on orders shopped and delivered by crowdsourced labor.

Today, Crawford argues, FreshDirect is better addressing these opportunities as well. It’s relaunched its nascent on-demand FoodKick service as Fresh Direct Express, providing shoppers more flexible fulfillment options with a toggle on its app or web page. Technologies inside its Bronx warehouse have influenced its thinking about speed and automation, leading to a partnership with microfulfillment technology company Fabric to debut Fabric’s first U.S. robotic picking center at a Washington, D.C., area delivery hub. Finally, he says, FreshDirect is winning over shoppers outside of the five boroughs on the strength of service and selection those shoppers may have overlooked until the coronavirus crisis sparked an interest in virtual food shopping options.

“As bad as the situation has been—I don’t want to make light of that because it’s been a tough on a lot of people—but the building was really ramped and ready for it,” he says. “If we had still been in our old building, there would be no upside for us. We would have been pushing customers into what we would say would be a poorer experience, and to some of the other competitors that are in the marketplace with us. So we were fortunate to have the space that we were in as we saw the ramp up.

“The interesting part is, we’ve seen a lot in conventional where that ramp came off, and now they’re actually normalizing,” Crawford continues. “We continue to see the comps going up. And we look at that with a little bit of marvel because the marketplace is doing that. We know that there's a ceiling somewhere. But we’re definitely seen seeing the retention levels are going up, the volumes going up, the fresh foods are going up. I’m literally marveling every morning when I wake up, and I look at what happened yesterday.”

One benefit of suburban vs. city shoppers? They have bigger kitchens and larger fridges to support larger baskets and the specialty items FreshDirect provides but are relatively harder to find where they live, Crawford says.

“It’s one thing trying to find a really good steak in New York City; there are some good butchers here, right? But trying to find a good steak in Philadelphia, D.C. or even Northern Jersey, it’s a little bit more scarce. So the basket size has gone up into the suburban market and has really done some nice things for us,” he says.

Crawford declined to cite specific sales figures but said double-digits comps coming into the COVID crisis “nearly doubled again.” During the first week of September, FreshDirect saw a 46% comp. “I was at Whole Foods for 10 years, and to be in a position to where you can see compounded, month-over-month, year-over-year, double-digit comps and a two-year stack, that’s something a typical retailer can’t imagine.”

COVID has also eaten away at the customer experience at many brick-and-mortar stores, which Crawford counts as an advantage for FreshDirect. “Customers are telling us it fits their lifestyle, and they never really realized it. It’s a head-scratcher for me when I pass the Trader Joe’s in my neighborhood and see people standing in line outside. And I think, they’re great operators, but having to wait in line to get into any place, it doesn’t feel like the right thing to do,” he says. 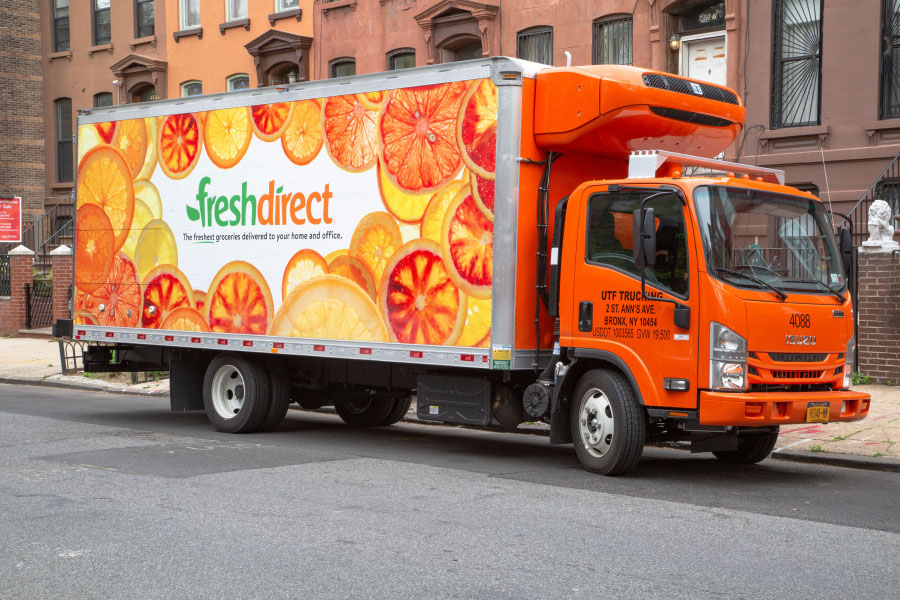 FreshDirect wasn’t spared the capacity constraints or supply chain issues experienced by competitors in the opening weeks of the stay-at-home mandates that came with the pandemic, but Crawford highlighted the company’s ability to adjust on the fly and the advantages of a virtual storefront.

“The thing that we have in our side is if the market needs us somewhere, we don’t have to go sign a lease and build a building. I’ve built 40 grocery stores in my time, and the fastest one we ever built took three years. The slowest one is one in Brooklyn—it took us 12 years to build,” he says of his experience at Whole Foods. “You just don’t have that time when the market’s exploding. So what we do is we say, ‘There’s a demand in that zone, and we’re selling out our time slots? Put another truck in that zone.’ And the next thing you know, we’ve got room to do another 400 orders there.”

From a merchandising standpoint, the company saw the need to flex its supply chain but the types of items most affected by the pandemic spared its FreshDirect’s strengths in assortment and highlighted the more efficient virtual model, Crawford adds.

“The fresh supply chain never really had an issue—we were really strong there,” he says. “In talking to colleagues in the business for other retailers, they weren’t as fortunate.”

A lot of that has to do with that direct relationship with suppliers, he explains. “Typically, if Driscoll strawberries are being sold in the marketplace at a grocery store, they go from Driscoll to a distributor, from a distributor to the retailer, from the retailer’s back dock to their front dock, to their 70-degree store where they die on a table with a ‘For Sale’ sign on them. In our model, basically Driscoll sends us the strawberries. It’s all those other points that could break down during COVID: transportation got wobbly for a little bit, getting things from state to state got a little bit wild, and all of the other pieces. We just didn’t have to deal with them, because we run the trucks, we manage the freight, we manage the sell,” Crawford says. “You’re taking five or six steps out of there on all the fresh products that we deal with. And we’re not buying five or six cases from Driscoll, we’re buying seven tractor trailers a week.”

Crunched availability of household items and specialty goods, in the meantime, put consumer brand loyalty to a test it ultimately survived. “We ended up getting toilet paper out of Mexico City, and it sold just as well as our top CPG brands,” Crawford says. 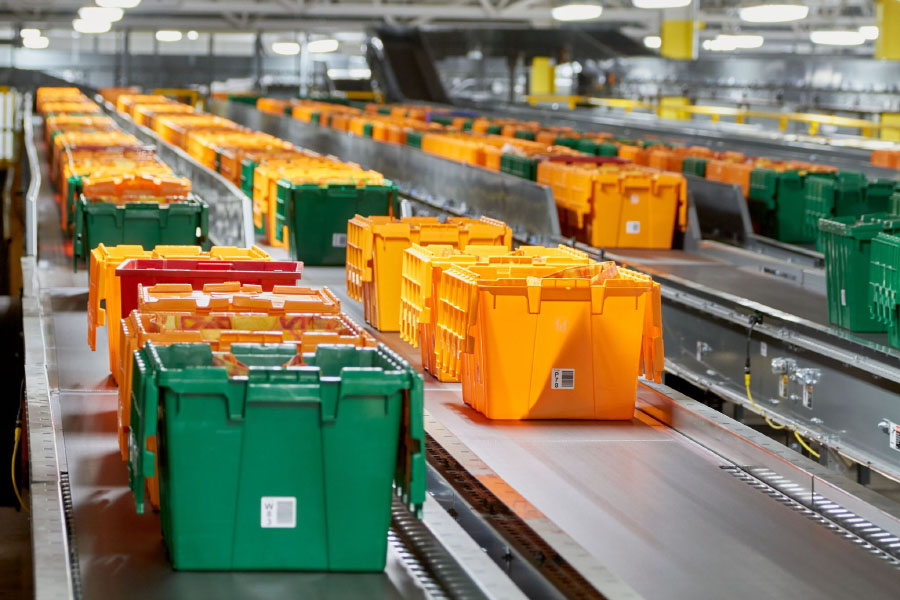 To the surprise of some industry observers, the U.S. debut of Fabric’s promising microfulfillment technology—typically thought to work as part of a physical grocery store—will make its debut a little further behind the scenes, powering a suburban Maryland distribution hub for FreshDirect. That facility, expected to bring faster and more efficient assembly of orders supporting flexible on-demand growth, will be up and running early next year.

Crawford describes the relationship between the New York grocer and the Israel-based tech company as a symbiotic one. “One of the things we’re really excited about is that Fabric is really good at the engineering part, and we’re really good at fresh.” He describes executives visiting with the company in Israel to see its technology in action and describes its strength as “making inventory control an automated process.”

FreshDirect, of course, is no slouch at sophisticated distribution, as its Bronx facility—something of a “macrofulfillment center” with 9 miles of conveyor belts supporting efficient transport of everything processed there from cut meat and fruits to roasted coffee beans—would demonstrate. “We’ve been engineering the grocery business for over 18 years,” Crawford says.

Adding multiple fulfillment options—executed first with the FoodKick business, and since rebranded as FreshDirect Express—is supporting an effort to win a greater share of customer’s overall food spend, Crawford says, while the quality of that food and execution of the orders in terms of accuracy and reliability vs. others in the space will help to keep them in the fold.

“There are so many people coming into e-comm grocery, and it’s like, I dare people to try somebody first and then come try us next. It’s almost like I want them to try, because then they can actually see how great it is going to be over here,” Crawford says.