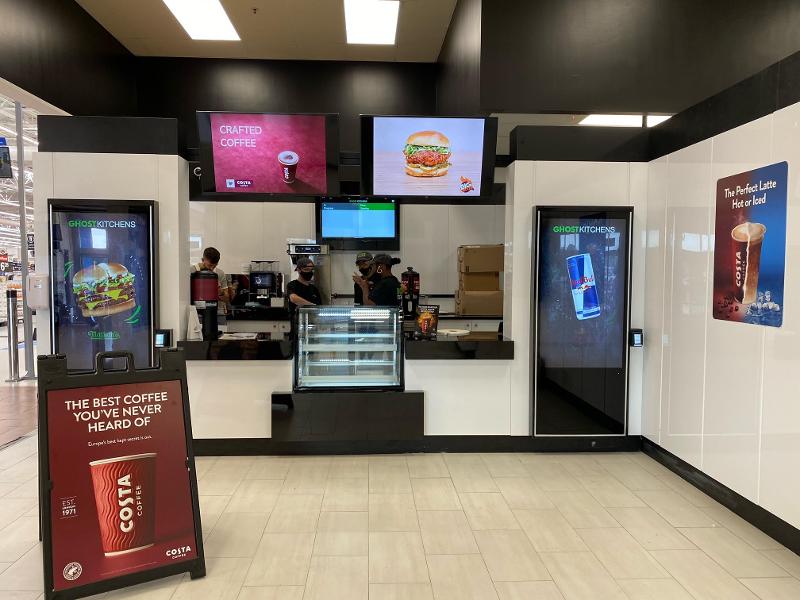 Walmart customers craving a Cinnabon cinnamon roll on their Saturday morning grocery stock-up trip may soon be in luck.

A Walmart Supercenter in Rochester, N.Y., on Wednesday became the first Walmart U.S. store to launch takeout and delivery service from Canadian ghost-kitchen specialist Ghost Kitchen Brands. A deal between Walmart and Ghost Kitchen Brands will see the latter company setting up shop inside at least 30 U.S. Walmart stores in the next two years, offering Walmart shoppers a range of restaurant brands, including Cinnabon, for takeout and delivery.

Additional brands featured at the Rochester location include Quiznos, Saladworks and Shaquille O'Neal's Big Chicken, which is making its East Coast debut. Customers can order a combination of items for delivery or pickup while they shop, either via mobile app or on-site kiosks.

Ghost Kitchens operates all of its locations via licensing deals with the brands. Each kitchen staffs about two or three employees who are cross-trained on the various concepts, President Marc Choy said in an interview in April.

Ghost Kitchens hopes to eventually have 800 locations in the U.S., with Illinois, Texas, Georgia and California next in line. It is targeting nontraditional, high-traffic sites in retailers and malls, as well as stand-alone stores. In some of its Walmart locations, it is taking the place of McDonald's.

“Why use real estate to offer one brand when you can use that 3,000 square feet, put a ghost kitchen in and offer 15 different brands?” Choy said in April.

It's a spirit shared by Kitchen United, another player in the ghost-kitchens space: Last month, Kitchen United and The Kroger Co. announced a partnership that will bring "virtual food halls" featuring as many as six restaurant concepts for takeout and delivery to Kroger banner stores. The first such concept is set to debut in a Ralphs store in Los Angeles later this year. Kroger also operates Kroger Delivery Kitchens at stores in Fishers, Ind., and Dublin, Ohio, in partnership with ClusterTruck.

A version of this story was previously published on Restaurant Business, a WGB sister site. Additional reporting from WGB's Jon Springer.