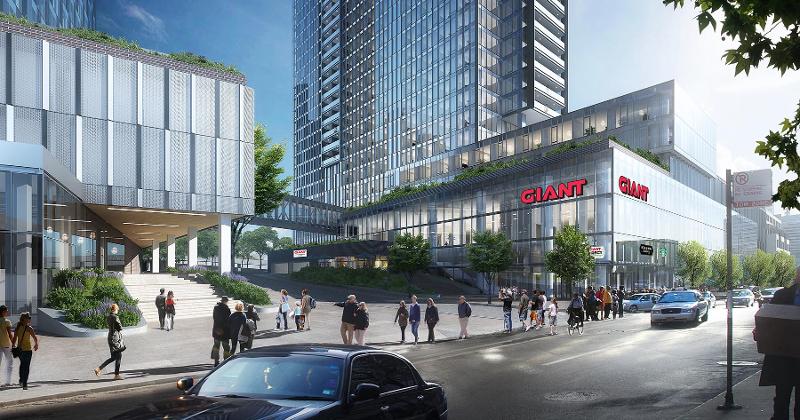 Giant Food Stores, which is in the process of peppering Philadelphia neighborhoods with its Giant Heirloom small-store concept, is adding an anchor to the fleet.

The Carlisle, Pa.-based brand of Ahold Delhaize this week said it would break ground on a new, two-level urban flagship store right on the cusp of Center City. The proposed 65,000-square-foot location will be built in the city’s new Riverwalk mixed-use development on the banks of the Schuylkill River. The new project is part of its ongoing commitment to the Philadelphia market, and comes on the heels of the company’s launch of the Giant Heirloom Market.

Nicholas Bertram, president of Giant; Dennis Davin, secretary of the Pennsylvania Department of Community and Economic Development (DCED); Philadelphia Mayor Jim Kenney; and Ron Caplan, president of PMC Property Group, were present at a groundbreaking ceremony at the site of the new development project.

“Like the city of Philadelphia, Giant continues to grow and innovate, becoming part of this new incredible Riverwalk project helps cement our commitment to Philadelphia,” said Bertram. “We’ve always been dedicated to bringing quality groceries to the people of our home state of Pennsylvania, but this new Philadelphia store, as well as our new Giant Heirloom Markets throughout the city, represent the future of Giant's fresh solutions for the way families live now.”

Incorporating an innovative two-level format, the store will be located in the first of two towers under development at 60 N. 23rd St., by PMC Property Group. Metro Commercial, one of the nation’s leading independent retail real estate firms, represented Giant in the deal. The store is anticipated to open in fall 2020 and will create more than 200 new jobs.

“Giant’s investment in Philadelphia and our many communities across Pennsylvania will not only enhance the quality of life for residents. it will also add quality jobs to the commonwealth’s economy. It’s great to see a company that started here in Pennsylvania continuing to grow and invest in our commonwealth and our workers,” said Davin.

Located in the Logan Square neighborhood and plotted within walking distance to Center City, the new location will boast natural light and city views that the company and its design partners say will enhance the shopping experience. There will also be an on-site outdoor terrace, giving customers a picturesque place to enjoy a glass of wine or beer with food. A dedicated on-site parking garage will be available exclusively to Giant customers.

“Giant has become an integral part of the Philadelphia region, both as a business serving our communities and as a tremendous partner to our area’s nonprofits,” said Kenney. “Not only has Giant done a great deal to improve the health and well-being of Philadelphians over the years, [but] its recent growth has also brought hundreds of high-quality jobs to our neighborhoods.”

Giant also said that it has “a breathtaking produce marketplace bursting with over 600 varieties of fresh produce with local product” and will also feature community vendor partnerships with Philadelphia-area food purveyors. The store will boast the largest plant-based department in the entire company.

The retailer will also soon open a new store in East Stroudsburg and has plans to open two more Giant Heirloom Markets in the Philadelphia neighborhoods of Northern Liberties and Queen’s Village. Giant has 158 stores in the Keystone State and employs nearly 29,000 associates there.