Ahold Delhaize's Giant Food Stores may be in stiff competition with Kroger's initiative to accomplish zero waste by 2025, having officially achieved the feat in its Cleona, Penn. store; a first across all of the Ahold banners.

The retailer's journey toward zero waste, which is classified by the U.S. Environmental Protection Agency as 90% or more of a store’s total waste being diverted from a landfill or incineration, started out humbly in 2012 when Giant outlined best practices to reduce waste within stores, having evidently implemented these practices successfully.

Judy Knarr, Cleona Giant assistant store manager and green captain for her district, said the initiative in Cleona has been a "total store effort" department-by-department and Giant's associates across the store have "embraced" the recycling efforts and "changed the store’s culture to achieve this goal.”

For example, Cleona associates have taken on the task of monitoring what waste is sent to the trash compactor so that no recyclables get mistakenly thrown away, such as cardboard mislabeled as garbage. The efforts also include making sure food scraps make it into designated bins for organic recycling and recyclable plastic items such as plastic bags are sent to Giant's recycling center. 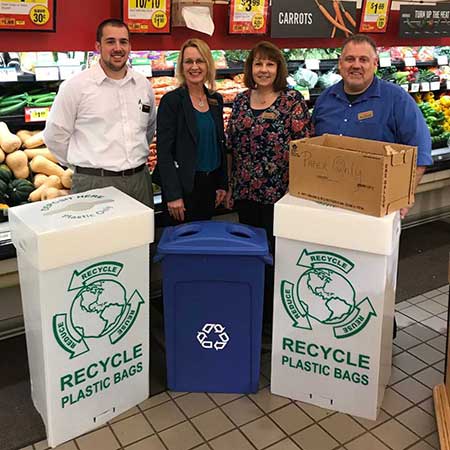 Additionally, Giant works to get its customers involved in the mission, according to Andrea Doygun, Cleona Giant store manager, who adds that there are a lot of "little things" the retailer does to get customers excited about reducing waste.

“We clean the empty frosting containers from the bakery as well as corn crates from produce and put them out for our customers to take them home and reuse them," she said, adding that "every little thing counts."

Giant also freezes and donates its meat products that would otherwise go to waste through its Meat the Needs program, which donated more than one million meals last year also including bread and other bakery items.

Last year, the company saved more than 930,000 trees by recycling cardboard at all stores and distribution centers. Since 2011, GIANT and its parent company have successfully removed more than one billion plastic bags from the waste stream through more efficient bagging, increased usage of reusable tote bags by customers, and turning plastic bags into 1,500 donated park benches through its Bags to Benches program.

“Doing our part in caring for the environment for future generations is a major initiative for us company-wide,” affirmed Manuel Haro, VP of strategy. “To reach zero waste is a significant achievement that required the complete dedication of all Cleona store associates. Not only is Cleona the first Giant to reach zero waste, it’s also the first store among our Ahold Delhaize USA sister companies to achieve this milestone.”

Currently 77% of all waste generated by Giant stores is diverted through recycling and composting and the retailer saved more than 930,000 trees by recycling cardboard at all stores and distribution centers last year. Additionally, Ahold has removed more than one billion plastic bags from the waste stream through more efficient bagging, increased use of reusable bags and the Bags to Benches project that turns plastic bags into park benches.