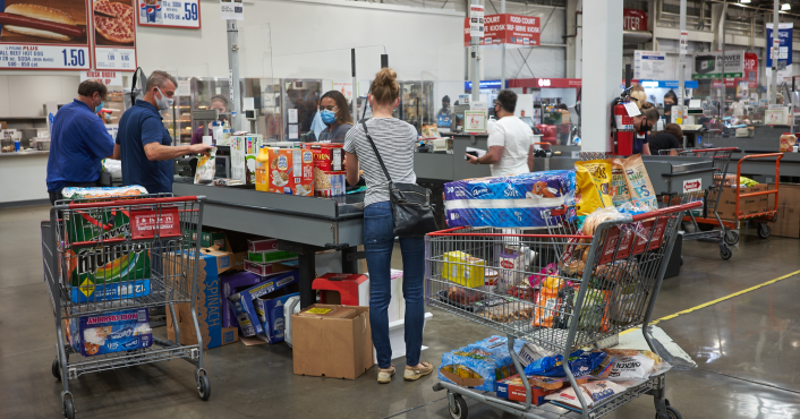 U.S. employers added 372,000 jobs in June, higher than economists' estimates of 250,000 to 270,000, and the unemployment rate again held steady at 3.6%, the Bureau of Labor Statistics reported Friday. However, the labor force participation rate reversed course, ticking back down 0.1 percentage point to 62.2%.

Food and beverage stores added 6,100 jobs during the month after shedding 8,300 jobs in May. Supercenters and warehouse clubs, after giving up nearly 28,000 jobs in May, lost 5,200 jobs in June. U.S. retailers overall added 15,400 jobs in June, a significant improvement after job losses in May.

Restaurants and bars, meanwhile, added a healthy 40,800 jobs last month after adding 46,000 the month before. The transportation and warehousing sector, which has seen costs skyrocket, added more than 35,000 jobs, with trucking seeing transportation's largest gains—a modest 4,300 jobs after a gain of 13,000 jobs in May.

As in May, the BLS also posted a downward revision to jobs numbers reported in previous months. The bureau revised down its April jobs tally by a notable 68,000 jobs and revised down its May mark by 6,000 jobs. April and May, then, saw employers add 74,00 jobs fewer than previously reported.

Following the Federal Reserve's recent interest-rate increases, economists and retailers—who have seen consumer sentiment dive and shoppers shift their spending from discretionary categories to consumables—will be closely watching next week's consumer price numbers for June. Consumer price inflation reached 8.6% in May, the BLS reported, and grocery prices were up 11.9% year over year—a food-at-home inflation rate not seen since April 1979. The BLS is scheduled to release its June CPI report on July 13.