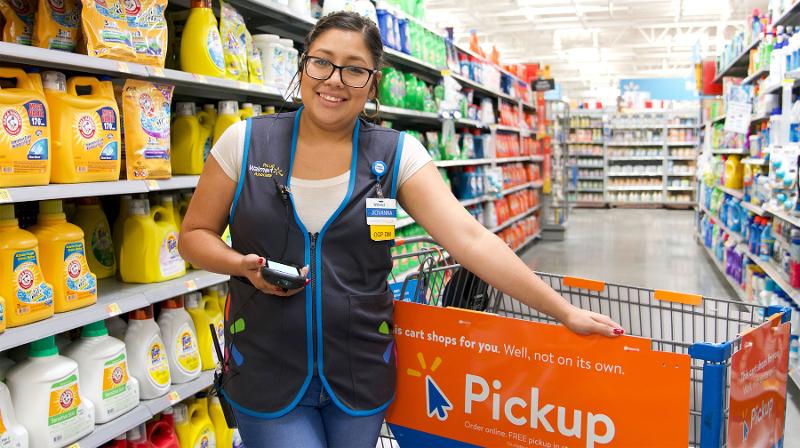 Combining a massive physical footprint, large product assortment and fast-evolving technologies to tackle a surge in online shopping demand in a way few competitors could, Walmart is coming out the COVID-19 crisis as a clear winner in grocery—and positioned to make further share gains.

According to new Shopperscape survey data from Kantar Retail, the Bentonville, Ark.-based mass merchant was an online grocery destination for nearly half of all online grocery shoppers over the past months—easily exceeding rivals for online grocery such as Amazon and Kroger. In an interview with WGB, Lei Duran, SVP of the London-based global research firm, said the figures confirm Walmart’s long-held faith that its combination of physical and digital assets would prove a competitive advantage in omnichannel retail—and that has led to more frequent shops and a larger share of customer’s wallet.

“As they’ve shown really strong growth for the last four years, it’s been from their online grocery,” Duran said of Walmart. “Ever since they started this, they had a kind of mantra that they were trying to tackle e-commerce on a Walmart basis: They have this great footprint, where 90% of shoppers are in a close radius to a store. And so they’re using that proximity and the total box to be faster and really make some inroads with grocery, instead of trying to win an Amazon game.”

The data shows that 48% of all online shoppers used Walmart for online grocery, vs. 36% at Amazon and 24% at Kroger. While those shoppers are not necessarily exclusive to the brands they use online, 82% of Walmart’s online shoppers are using the offering at least once a month, Kantar noted. This is a formidable “ecosystem,” consisting of an enormous audience that's making purchases frequently, now expanding to sales across the entire box, which aids profitability of the offering and unlocks the promise of omnichannel, Duran said.

During the COVID crisis, Walmart made moves to support that “total box” strategy, including merging previously separate shopping apps for groceries and general merchandise, and introducing a paid Express Delivery option behind marketing that subtly emphasized it offered more than just food. “I think it's time we stop referring to our Supercenter pickup and delivery capability as online grocery, because it’s becoming much more than grocery,” CEO Doug McMillon said in a recent conference call reviewing the retailer’s first-quarter financial results. E-commerce sales improved by 74% in that period, and new customers trying pickup and delivery for the first time—many due to stay-at-home mandates associated with virus mitigation—increased fourfold.

“People buy groceries all the time,” Duran noted. “You might not buy other items, but to have such a lead in frequency over the Krogers of the world—you would think that that would be their superpower.

“Now [Walmart] is doing the app integration, and that’s a step to take the people that are already in the ecosystem for pickup and delivery, and expand them into total box.”

What lessons can the industry take from Walmart’s surge?

“Play to your strengths instead of trying to be someone else,” Duran suggested. “Instead of trying be Amazon, or instead of trying to go and be a grocery store, Walmart really said, ‘My competitive advantage is the fact people trust me for EDLP (everyday low price). I’m not going to high-low price them. And I’m going to have a total box, one-stop shop with brands and add e-commerce functionality to help make that promise and that vision more accessible across the board.”

Other retailers that had invested in their strengths going into the crisis were generally in better shape to thrive during it, Duran added. For example, she said, the emphasis on meal solutions served retailers such as Kroger and Publix well because they were in better position to have gained from the shift of food-away-from-home as the pandemic forced scores of restaurant closures. “They were not only gaining grocery dollars, but they’re potentially gaining the entertainment and eating-out dollars, that were transferring to them in an easier fashion,” Duran said.