Food retailers from coast to coast are increasingly turning to indoor, vertical and greenhouse farming to meet the demand for locally grown produce, reduce food miles and offer the freshest product possible. Some, such as Tops Friendly Markets in Williamsville, N.Y., are partnering with greenhouse operators off-site, while others, such as Whole Foods Market and The Kroger Co., work with greenhouse and indoor farming experts to grow on-site and in-store.

“As our climate continues to change in primary growing regions, Mother Nature continues to add challenges that are very hard for growers to overcome. Customers are demanding we have product regardless of that,” says Jeff Cady, director of produce and floral for Tops. “Greenhouses give us an opportunity to meet our customers’ needs day in and day out.”

Tops has partnered with greenhouse builder and operator BrightFarms of Irvington, N.Y., to offer shoppers lettuce, arugula and spinach grown closer to home—specifically in a Wilmington, Ohio, greenhouse about 400 miles from Tops’ distribution center. “The idea was to try and take miles out of the supply chain and ultimately get as fresh a product as we can for our customers,” Cady says. 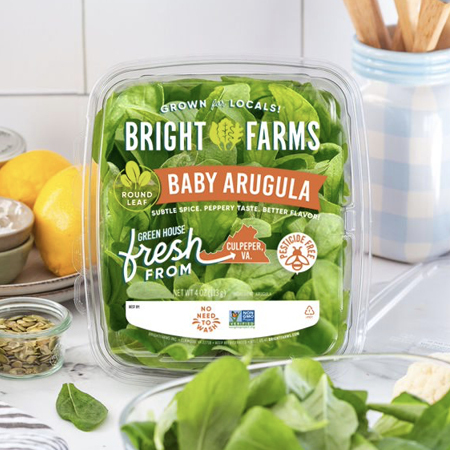 Cady, who estimates Tops sells 25% to 35% more greenhouse-grown produce than it did five years ago, sees continued potential for growth.

“We will expand as products come online. Greenhouse-grown strawberries were not available five years ago. We have been bringing them in and have had very good results,” he says. “Perception is reality. Add in the perceived food safety and environmentally friendly components, and greenhouses will continue to thrive.”

The Kroger Co. recently partnered with Infarm, an indoor farming company based in Berlin, to bring high-tech modular farms inside its U.S. stores. The program, which began with 15 QFC stores in Bellevue and Kirkland, Wash., grows leafy greens inside glass tanks located in the produce department.

“Kroger believes that everyone deserves to have access to fresh, affordable and delicious food, no matter who you are, how you shop or what you like to eat,” Suzy Monford, Kroger’s group VP of fresh, said in November when announcing the Infarm partnership, which she said enables the Cincinnati-based chain “to innovate by combining groundbreaking in-store farming technology with our passion for fresh, local produce and ecological sourcing.”

The alliance with Kroger marks the first U.S. rollout for Infarm, which was founded in 2013 and has more than 500 farms in food stores and distribution centers in Germany, Switzerland, France, Luxembourg and the U.K. Infarm remotely controls growing conditions at its units through a cloud-based farming platform that adjusts to the specific needs of each plant. The company says it can re-create growing conditions from around the world, bringing plants that were previously too delicate, rare or expensive to stores.

“The grocery retailer landscape is facing increased competition and demand for fresh herbs and leafy greens,” says Jeffrey Landau, director of business development for Agritecture Consulting in New York. “Vertical-farming companies such as Square Roots, Infarm and Dream Harvest Farming Co. are providing grocery stores with a fresher product that has a longer shelf life due in part to being grown within a few miles, if not feet from the store.”

Agritecture consults across the board, from controlled-environment agriculture (CEA) operations (both greenhouse and indoor vertical) to soil-based farms. Clients such as New York-based Square Roots, which grows all of its produce in modified shipping containers using 100% artificial light, sells throughout New York City to Whole Foods, the Greene Grape, C-Town and more.

The vertical-farming market is anticipated to reach $9.96 billion by 2025, according to a recent report by San Francisco-based Grand View Research, which points to increased use of internet of things sensors for producing crops, as well as the growth in agriculture automation and the use of big data to maximize yields as market drivers.

“All in all, the vertical-farming industry is on pace for substantial growth,” Landau says. “As it compares to the greenhouse industry, vertical farming is still a relatively new industry and profitability is not guaranteed. Most large-scale vertical farms take at least six years to return on their investment. However, greenhouse operations, if done correctly, can be profitable within the first two to three years of operation.”

As a result, the greenhouse industry has also experienced considerable growth in recent years. Both New York-based Gotham Greens and BrightFarms received substantial equity funding ($29 million and $55 million, respectively) in June 2018, while Little Leaf Farms of Devens, Mass., received $18 million in financing from Bank of America in December 2019, to be followed by an additional $20 million.

“It’s difficult to say which one is growing faster, but it is clear from the numbers that both industries are experiencing strong growth,” Landau says.

When the company expands from five acres to 10 acres with the opening of a new Devens greenhouse in May 2020, its production of sustainably grown lettuce will double to 2 million boxes delivered to New York and New Jersey’s major supermarket chains, said Little Leaf.

Denver-based Altius Farms is redefining the meaning of local for area restaurants and retailers. The vertical farm, which can be seen through tall glass windows above a popular downtown Denver restaurant, sells to 40 area restaurants and five local grocers, including Leevers Locavore, Choice Market and Marczyk Fine Foods.

All of Altius Farms’ highly perishable salad greens, herbs and edible flowers are sold within a 10-mile radius, with the majority sold within a 2-mile radius. “We want to reduce our food miles and change the way we grow food. [Vertical farming] also reduces waste and depreciation of flavor content,” says Sally Herbert, Altius Farms co-founder and CEO.

Increased production that uses fewer resources within a smaller footprint is another benefit of vertical farming. “We can grow 10 times the amount of produce than conventional farming,” says Herbert, former president and CEO of GS1, the largest supply-chain standards organization in the world. 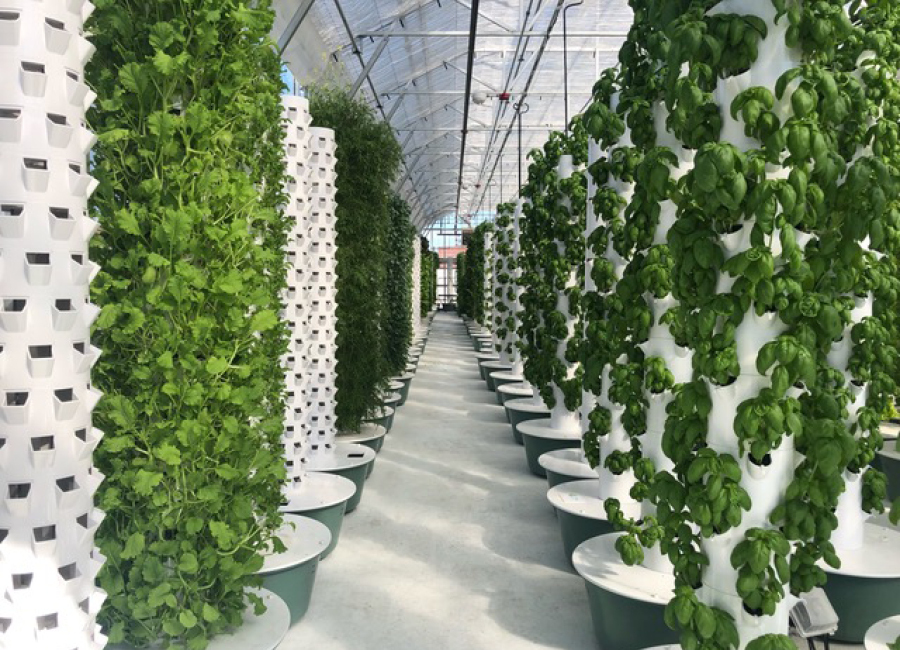 Altius Farms cultivates 12 to 14 harvests on a series of 8-foot towers each year, producing 37,000 pounds of greens annually. “It’s a lot of bang for your buck,” she says. But the labor costs associated with vertical farming can be steep. “Labor is responsible for 40% to 50% of the cost of sale, and in some cases even higher.”

The higher price point for some indoor-grown greens, means that consumer education is critical to category success.

“The consumer has to make a choice. We’ve got to get them to see the value of local. Small-format grocers are wonderful to work with and are really our partners in this,” says Herbert, whose Altius Farms leads in-store samplings to educate and inform consumers. “Whenever we do a Saturday demo at grocery, we see an uptick in sales.”

Promoting local is also key. Choice Market uses little flags in its cold cases to alert shoppers that Altius Farms’ greens are a local product grown up the road.

“Social media is also pretty important these days,” says Herbert, who points to grocery partners who have touted recipes featuring Altius local greens on their websites and digital communications. “It brings the product to the customer in a more personal way.”

For Herbert, who has worked for many years as a supply-chain executive, Altius Farms offers a solution in providing responsibly grown fresher food. “This is one way to grow. Mass-produced in a warehouse is also a way to grow, as is farming outdoors,” she says. “It’s not about a right way or a wrong way—it’s about giving movement to growing closer to consumption so we can start to see the impact on the climate and quality of product.”

U.S. consumers will place increased pressure on manufacturers to produce locally in 2020 and beyond, according to new research from New York-based Nielsen, which finds that local ingredients and food sourced and produced close to home are important to nearly half (48%) of consumers.

As locally grown, fresher produce continues to top the list of consumer demands, Steve Platt, CEO of BrightFarms, sees continued growth in greenhouse cultivation. Since 2016, BrightFarms has partnered with Ahold Delhaize USA’s Giant Food Stores and its supermarkets under the Giant and Martin’s banners, as well as Kroger’s Roundy’s.

“They chose to work with us early on because they saw the enormous potential of a year-round local program in the salad category,” says Platt. “These partnerships continue to play a major role in the growth of our company and are our primary focus. As early believers in fresh and local food, our retail partners have seen category growth beyond their competitors.”

At press time in January, BrightFarms was on track to open a new Selinsgrove, Pa., greenhouse, which will service customers in the New York and New Jersey metro areas. The greenhouse grower’s operations have expanded by about 420,000 square feet to 740,000 square feet in the past several years.

“This growth is a direct result of the growing demand from new and existing retail partners,” says Platt, citing SPINS data that “shows that when retailers introduce our products, their salad category grows.”

Concerns around food safety are also driving demand for produce grown indoors, Platt says. “Leafy greens grown in controlled, indoor environments, like a greenhouse, deliver a structurally safer supply chain for retailers and consumers,” he says. “By growing indoors, we eliminate many of the risk factors associated with field-grown produce like agricultural water and proximity to animals.”

BrightFarms grows, packs and distributes its greens from one farm labeled clearly on the package. This “avoids co-mingled processing facilities that make it extremely difficult to trace pathogens back to a single contamination source,” says Platt.