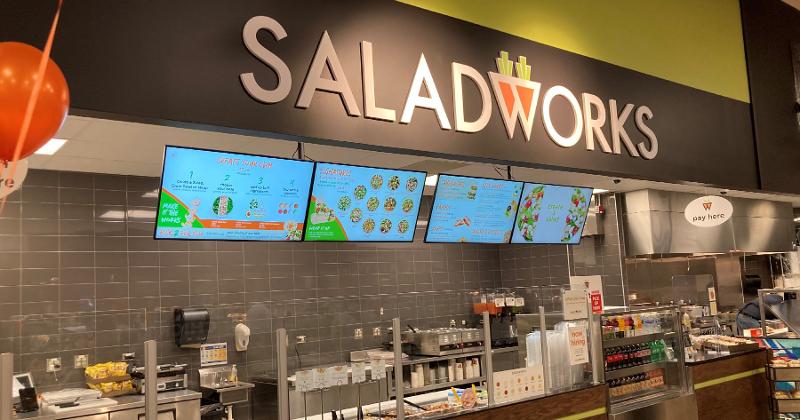 Saladworks, the fast-casual, entree salad franchise, has debuted its first restaurant inside a Kroger grocery store. The new location, which opened Nov. 20, is at 7900 Beechmont Ave., Cincinnati.

Much like its stand-alone locations across the country, the new in-store Saladworks focuses on customization by offering shoppers an array of over 60 fresh, flavorful and healthy ingredients from which to create a salad. In addition to its Signature recipes, Saladworks offers create-your-own options, including salads, wraps, grain bowls, soups and more, including a limited assortment of grab-and-go items.

Saladworks began its move into grocery stores in early 2019. It currently has restaurants in seven grocery stores in Pennsylvania, Maryland, New York and Ohio, including a location in The Giant Co.’s Camp Hill, Pa., store, which opened last month. Other in-store Saladworks reside in The Fresh Grocer, Wyncote, Pa., and a Philadelphia ShopRite store. According to the company, it has more than 10 new openings in grocery stores planned through first-quarter 2021.

“Grocery stores are an exciting growth area for our brand. With COVID-19 bringing safety challenges to self-serve food bars in grocery stores everywhere, guests can feel safe with Saladworks,” said Eric Lavinder, VP of development for Saladworks, in a statement. “Guests can get the same great experience and variety at a grocery location as they can a traditional restaurant.”

In addition to in-store orders, grocery store restaurants for Saladworks also offer shoppers the option to order online through the Saladworks website or by calling ahead for pickup. Shoppers can also have their Saladworks orders delivered using third-party delivery partners such as DoorDash, Grubhub and UberEats.

While the Saladworks menu includes 12 chef-driven Signature salads, the Saladworks experience also invites guests to customize their own salads with a wide range of fresh ingredients including a base of greens, grains or a combination of both.