A team of Kroger leaders presented a comprehensive new strategy meant to build upon differentiators in fresh food and omnichannel that were strengthened and/or established during its three-year Restock program, aiming among other things to double online sales and associated profitability by 2023; grow geographic reach by establishing pop-up stores in rural communities and increasing home delivery as Ocado facilities come online; and continue growing alternative sources of revenue like advertising and an online marketplace.

Dubbed “Leading with Fresh and Accelerating with Digital,” the strategy will position the Cincinnati-based grocer to “compete and win in a post-COVID world,” gaining greater share of a $1.4 trillion addressable U.S. food market of which Kroger currently retains about 10%, CEO Rodney McMullen said. The three-hour virtual presentation March 31 was peppered with revelations and data, and delivered in a decidedly upbeat and confident tone—yet was met with seeming indifference by the market, where Kroger stock was trading down by around 4%.

“Kroger is in a position of strength today because of our transformation,” McMullen said, referring to the significant—but at times, rocky—Restock initiatives that cut $3 billion in costs and devoted them to investments in a variety of new capabilities, associate training and price investments, and the establishment of new revenue streams. These capabilities helped Kroger gather new momentum through the pandemic last year, said McMullen. “We’ve deepened our connection with customers and associates. We accelerated digital sales and profitability by several years and identified new customer-centric innovations for tomorrow.” 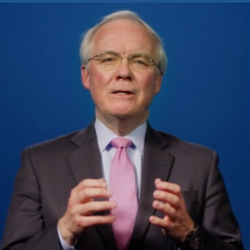 The new strategy positions fresh food, where Kroger officials say they already have a large advantage in the market, as a leading driver of sales growth—and an underpinning of everything else. As McMullen put it, food is Kroger’s “core platform.” Better returns will come as Kroger improves the profitability of its digital shopping operations and the benefits associated with that, including alternative revenues and potential geographic gains as delivery and pickup options will arrive in places Kroger has yet to reach—such as a handful of rural communities in Ohio where Kroger has been quietly testing digital “pop-up” stores known as Hometown Pickup—and in places like Florida, where a soon-to-open Ocado e-commerce facility will unleash sales growth in a state where Kroger currently operates no stores.

The much-talked-about Ocado offering—which “soft-launched” earlier this month in Ohio—is not getting a slick brand name as counterpart Sobeys did with a similar rollout in Canada, but will revive a fleet of branded delivery trucks that officials see as a key element of branding strategy—“a return to the trusted neighborhood delivery person,” according to Gabriel Arreaga, Kroger’s newly named SVP of supply chain.

Also shared for the first time was a sunny projection on how Ocado facilities are expected to “ramp up” financially—reaching unit-level break-even in three years, parity with stores in four years, and superior profits in year five. Near-term startup costs for 11 announced facilities and their respective maturity curves indicates, however, that their impacts won’t necessarily arrive suddenly.

Alternative revenues in the meantime—a combination of personal finance, retail media, data insights and ventures—will deliver another $100 million to $150 million of incremental profit growth in 2021, CFO Gary Millerchip said. “That represents another year of double-digit growth in alternative profits, and we expect to achieve continued double-digit year over year growth for the foreseeable future.”

By maximizing strengths in supply chain, technology and operations—and focusing them on the categories which its shoppers care most about—Kroger is positioned to widen its advantages in fresh food, said Stuart Aitken, Kroger’s chief merchandizing and marketing officer.

“Produce is the No. 1 influencer on store choice. We are enhancing the customer experience through our efforts to improve fresh through our reimagined end-to-end process,” that for example is adding shelf life to categories such as milk—where 10 days of shelf life is something no competitors can do, Aitken said.

Four big sellers in the produce department—bananas, berries, bagged salads and tomatoes—are also getting new attention from Kroger as these products combine for about 28% of department sales. Elsewhere, Kroger intends to progress meal strategies by leveraging private brands such as Home Chef and Simple Truth, predicting that proprietary chicken would be a $1 billion business in two years.

The initiatives are meant to build on strength: Aikten said the company is already the top-scorer in the company’s own “Fresh Equity Index” measuring a combination of sales performance and customer perception scores. The company’s market share in fresh food is 30% in the areas it operates, said Dan De La Rosa, Kroger’s group VP of fresh merchandising.

“Innovation is the lifeblood in fresh. We may fail with some, but when we do, we will fail fast.”

Other moves will focus on innovation such as a Clustertruck “ghost kitchen” partnership in two stores and a newly launched Saladworks outlet at an Ohio store.

“Innovation is the lifeblood in fresh. We may fail with some, but when we do, we will fail fast,” Aitken said. “That said, when we detect a home run, we will scale at a pace that matters and that will move the needle for Kroger.”

Kroger has also become more effective at telling a differentiated “fresh” story, said Amanda Rossi, VP of marketing. Rossi said the “Fresh for Everyone” campaign launched during Restock had captured the energy of its teams and the imagination of shoppers who’ve responded increasingly positively to the distinct animated characters at the heart of the ads. The company has seen a 20% increase in return on investment and an 80% increase in advertising effectiveness since those ads launched for the first time in late 2019.

iSpot, a third party which measures customer engagement with ads, showed Kroger had bumped engagement scores from 4.1 prior to the campaign to as high as 9.8 for its viral “Lower than Low” ad—a score that beat an unnamed big-box Super Bowl ad, presumably Walmart’s. As previously reported, a viral meme launched from “Lower Than Low” swept social media channels like YouTube and TikTok early this year, earning Kroger 45 million new impressions, she said.

This year, Rossi said Kroger would move toward “personalizing” the broad-based campaign, using varied mediums to reach customers “in the right context and at the right time,” Rossi said.

Officials for the first time shared a maturity curve for its forthcoming fleet of automated pick centers, the first of which is now coming to life in Monroeville, Ohio, with a second in Groveland, Fla., set to launch shortly. Arreaga described each of these facilities as providing the volume of about 20 stores—at about 60% of the cost and labor of that many stores. “Most of that labor is actually in delivery trucks,” he pointed out. “Now, those delivery trucks create this great customer experience that the customer actually expects on walking into the store, and now, we’ll actually see at their homes. That, together with pickup and everything else, makes for a great ecosystem to actually create that profitability.” 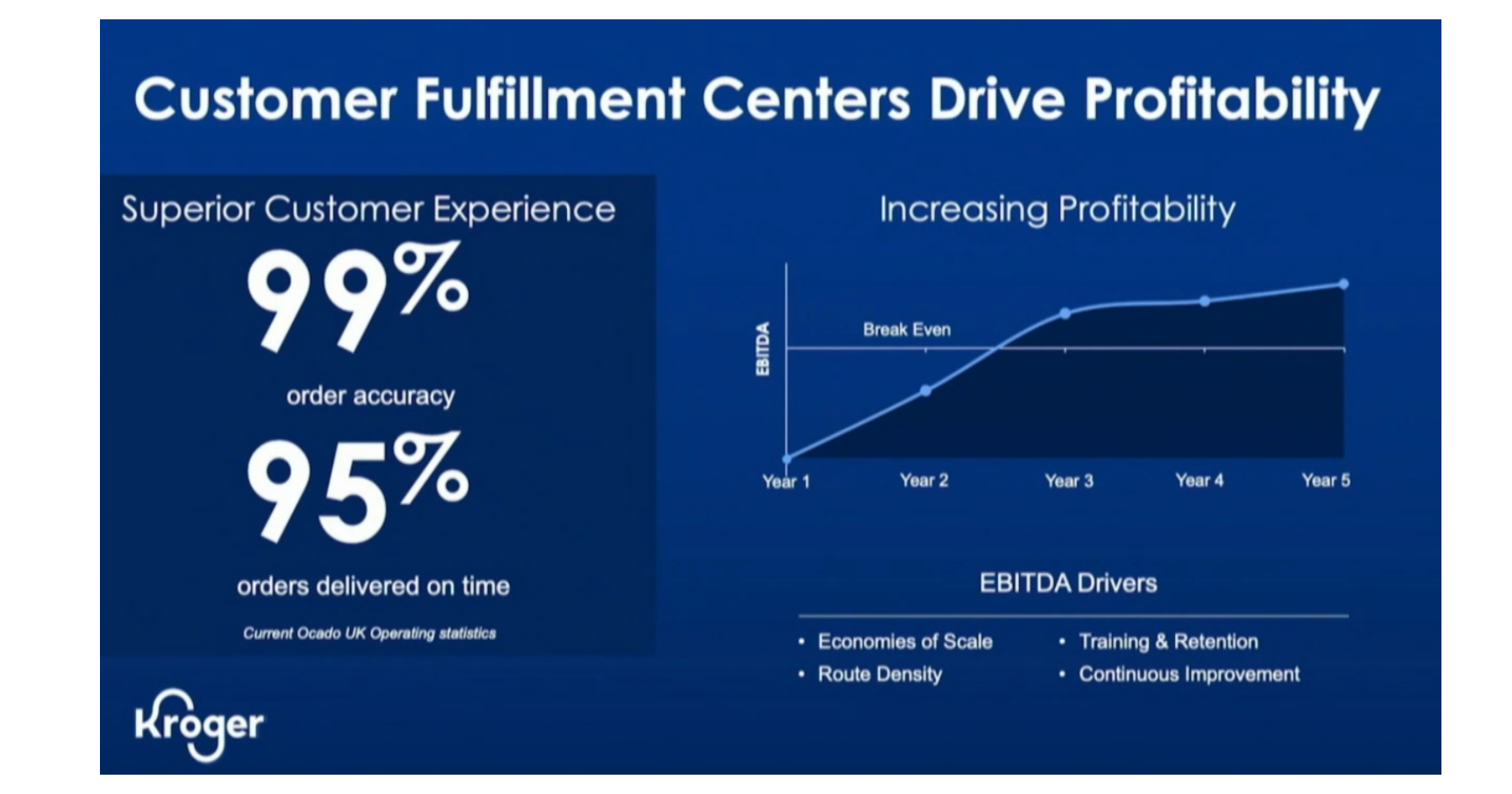 Arreaga pointed to the high net promoter scores Ocado facilities have achieved in other countries such as France and Canada, saying Kroger stands to benefit still further as they will add to an e-commerce business already doing $10 billion in sales a year.

Officials said doubling that total to $20 billion by the end of 2023 is contemplated as part of the new strategy.

“As we continue to expand our network, cost of delivery will continue to decline due to customer proximity and density,” said Arrega, who joined Kroger in September from Mondelez. “In my experience, leading supply chains in different economies and geographies, reach matters in creating an ecosystem that captures rapid market share and lowers operational costs aggressively. And that is why we invest in CFCs that cover a vast population with one single building, versus other competitors that invest in hundreds of facilities. We will scale faster.

"We've invested in Ocado because they will supercharge our anything, anytime, anywhere strategy for even more growth and profitability in the future. In the countries where Ocado state-of-the-art automation and AI are being leveraged, the result is a consistently superior customer experience, with 99% order accuracy and 95% of orders delivered on time that customer experience is second to none.”

Kroger for the first time revealed it was testing an expansion strategy known as Hometown Pickup in a variety of small markets in its home state of Ohio. Approximately 25 small towns now have the service available, whereby Kroger ships by truck orders to temporary “pop-up” sites—primarily underutilized parking lots, it appears—to deliver orders made online.

A perusal of sites where Hometown Pickup is currently available show many communities are currently served by dollar stores only: some sites are directly across the street from Family Dollar and Dollar General sites.

Like Ocado, Hometown Pickup “expand[s] the reach of our differentiated customer proposition without the need for significant investment in a store footprint,” Millerchip said. “We will be monitoring early results closely to evaluate potential future new geographic expansion.”

“We’re getting really strong customer feedback because it’s giving more options of what customers want of our great products [and] fresh products, more offering in places that they might not have access to before,” added Mary Ellen Adcock, Kroger’s SVP of retail operations.