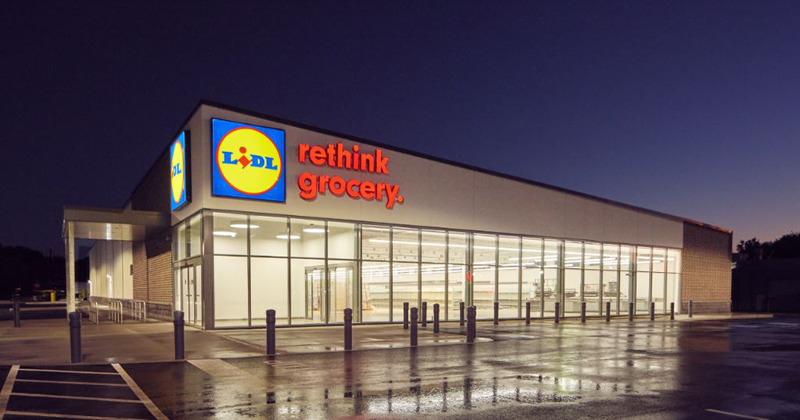 So much for “glass palaces.”

Lidl’s new store in Aberdeen, Md., which officially opened Jan. 16, is the first in the hard discounter’s U.S. fleet to open with a 25,000-square-foot box. More than 60 other U.S. locations—including its first store in Georgia that also opened this week—operate under a 36,000-square-foot prototype.

While relatively small by Lidl’s U.S. standards, the Aberdeen unit is more in line with the size of discount competitors in the U.S., as well as Lidl’s 10,000 units overseas, reflecting a new flexibility as it relates to stateside expansion. Sources say at least some of Lidl’s existing and planned units appeared out of line with costs and sales volumes they have experienced, and the grocer has made any number of adjustments to planned units, including downsizing some in the development stage. The Aberdeen unit, in fact, was initially envisioned as a 36,000-square-foot store, reports indicate.

The new flexibility comes in the wake of new U.S. management installed last year and indications that leaders at Schwarz Group, Lidl’s German parent company, were uneasy with the costs of its modern fleet in the U.S and Europe. Klaus Gehrig, CEO of Schwarz, reportedly dismissed such “glass palaces.”

The Aberdeen store appears to pioneer a kind of compromise. Its storefront windows are cut off before reaching the roof, which also does not appear to arc as high or as dramatically as its forbears. In their place is signage showing the Lidl U.S. “Rethink Grocery” slogan.

Tighter confines inside will not interfere with the assortment, spokesman Will Harwood told WGB in an email. “[It] will have the same, high-quality assortment shoppers can find at our other nearby Lidl stores in Maryland and Delaware.” Photos from the opening posted at social media sites indicated the chain’s self-service bakery remains a part of the offering.

Lidl has not specified the number of items it carries but industry consultant Bill Bishop of Brick Meets Click estimates assortment in the prototype store numbers about 4,500 skus, including a considerable selection of in-and-out items. “A 25,000 square foot store probably won’t be that far behind,” in the number of items, he added, estimating about 4,000.

Harwood characterizes Lidl’s adaptability as a means to speed its expansion, allowing it to work in a variety of locations, including recycled retail sites such as dark supermarkets, and in urban commercial spaces. Lidl has acquired a variety of such sites with its announced purchase of Best Market’s 27 stores.

“The small retail unit gives Lidl the ability to fit into smaller sites and to profitably serve smaller trade areas which is a plus,” Bishop added. “At this point I don’t see any real negatives. If a customer buys into the Lidl value proposition, they’ll like the smaller store as well as they like the larger one.”