Eric “Bean” McKay, the Virginia teenager whose enthusiasm for Lidl’s peanut butter triggered a multifront social media movement, is now appearing on the label of a limited edition of the product available at Lidl stores that will benefit autism charities.

Lidl said it would be donating 10 cents of every jar of the creamy peanut butter with McKay’s photo on the label to the Autism Society of America as part of a celebration of Autism Awareness Month.

As previously reported, McKay, like many autistic kids, is sensitive to food textures and as a result eats peanut butter sandwiches three times daily as a means of self-treatment. When his mother Tracy found peanut butter on sale at a Manassass, Va. Lidl for 78 cents a jar she bought six cases—and as the supply dwindled Bean tweeted to Lidl to ask when the item would go on sale next. That exchange turned into a retweet challenge for a “lifetime supply” of peanut butter that went viral. 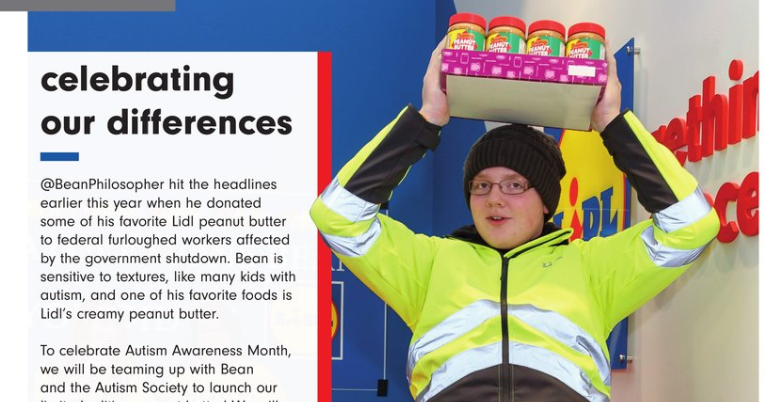 After McKay’s Tweet surpassed its goals earlier this year the movement took on a second wind as he shared a portion of the peanut butter he’d earned with furloughed government workers, handing out free jars at an area store. McKay’s father was among those affected by the shutdown.

Now Lidl is returning the focus on autism awareness. In addition to offering the limited edition “Beanut Butter,” on sale at $1.15 per jar this week according to a print ad featuring McKay, Lidl said it would institute a series of “sensory friendly” shopping times featuring reduced lighting, noise, music and in-store announcements, lowered scan volumes at checkout lanes, additional assistance and “fun store maps for kids to help our customers with autism enjoy a more pleasant shopping experience,” Lidl said. The special hours are scheduled every Thursday in April from 6 p.m. to close beginning April 11.