A Billy Joel cover band was playing under a tent in the parking lot as a wet snow fell in West Babylon, N.Y., and the hard-discount chain Lidl opened its doors for the first time on Long Island.

If there was a message beyond highlighting one of the region’s most famous cultural exports as a means of importing the Germany-born, Alexandria, Va.-based discount chain, it might be found in the lyrical themes of the artist as the band banged out renditions of “We Didn’t Start the Fire” and “It’s Still Rock and Roll to Me.” The more things change, Billy Joel seems to remind us, the more they stay the same.

This Lidl site, until about six months ago, was a Best Market, and a few years before that, it was known as Pathmark. Lidl may represent the latest evolution in grocery shopping for Long Island—and undeniably, it’s a bigger step change than most—but it’s still in the same business of its predecessors, neither of which truly survived it.

Lidl U.S. Chairman Roman Heini, on hand for the opening, was optimistic but seemed to acknowledge as much. 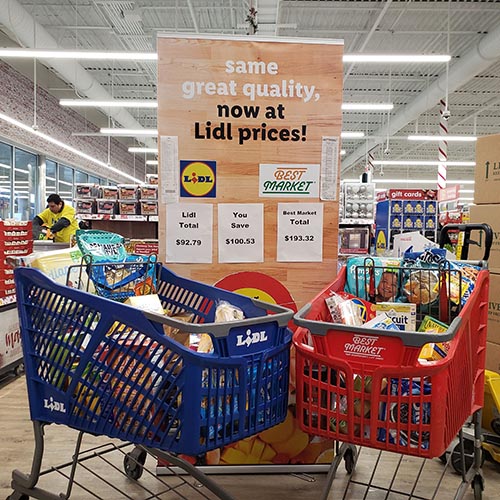 “Obviously, this store has been renovated and that’s always nice, but eventually, it’s going to come down to what is the take-home value?” Heini said in an interview with WGB. “And we are very convinced that in comparison to Best Market, but also some of the other operators here, that [our comparative pricing] will be a very strong message today and for the foreseeable future as well.”

The West Babylon store—and a second Lidl site further East along the South Shore in Center Moriches that also opened this week—represent the first two conversions of the 27 Best Market stores Lidl acquired a year ago, signifying intentions to make a strong play for market share on Long Island. A third conversion opens next week in Huntington Station. But it’s not going to end there. “It’s just the beginning for us,” Heini said. “It’s not just the Best Markets which we'll convert this year and next year, we are looking at other sites as well. So, we see Long Island as part of our new home turf.”

Shoppers entering Lidl for the first time were reminded of Heini’s comparative basket example executed through a familiar industry marketing stunt: the side-by-side shopping-cart price comparison. Only in this case, the comparison wasn’t with a competitor but with Lidl’s own Best Market predecessor. The basket of 50-some Lidl private-brand goods vs. the brand-name counterparts available in Best Market was skillfully selected to indicate a savings of just more than $100—$92.79 vs. $193.32 at Best—while subtly emphasizing an equivalency between the quality of the items, a key challenge in gaining the trust of customers in a wealthy market known for its high cost of living. 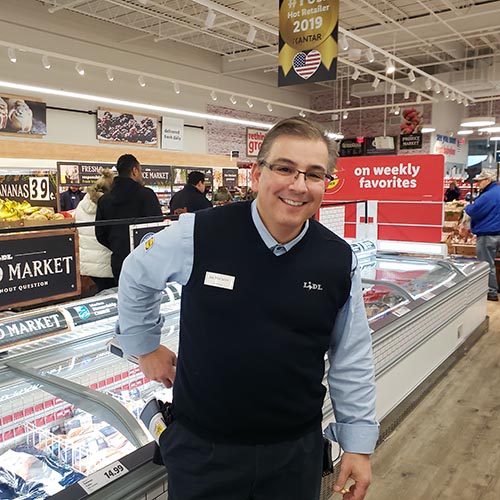 At the same time, Lidl isn’t rejecting its sister entirely. In addition to employees, many of whom were lured by higher pay and better benefits to continue with Lidl, there were reminders that Lidl had paid attention to what Best’s stores told it in the months leading to its debut. Long Islanders, for example, like their delis. A first-in-the-U.S. deli department at the West Babylon location won’t challenge a Long Island deli in assortment or sandwich making, but it offers freshly sliced sandwich meat for self-service takeaway in a similar manner to how Lidl’s bakery preps breads and cookies several times a day.

Elsewhere, new-to-Lidl offerings such as cut fruits and nuts and seeds were merchandised with tags reminding shoppers of their Best Market roots. And the store floor, with brown tiles resembling a wood grain instead of the brushed concrete of its ground-up units, was also imported from Best. That compliments a change from earlier stores emphasizing sleek and modern design heavy on glass and shiny steel: Department signage now resembles hand-written chalkboards, and the design panels recall kitchen tiles and weathered brick.

West Babylon store manager Joe Marazzo, who most recently led a Best Market store in Riverhead, N.Y., was among the first Best Market veterans to join Lidl’s manager training program, a six-month process that began last February. Marazzo was all smiles at the debut: pleased that former colleagues are still working alongside him and tickled to see that some shoppers at the grand opening had traveled from Riverhead—a lengthy grocery trip by Long Island standards—when they discovered Marazzo would be managing the debut store.

“In my opinion, [Lidl] saved the company,” Marazzo said of Best Markets, although he confessed that was not his initial impression. “A year ago, I was pretty uncertain. Three weeks in, I was like ‘really?’ And by four weeks in, it was amazing. Lidl has done everything they said they would by the employees.”

Whereas Best Market trained and promoted its workers as experts in their departments, Marazzo spoke to the value of the generalists trained by Lidl.

“The skills have translated,” he said. “You had that deli manager who was an expert in deli? He’s now confident he’s learned all the processes to be a deli/bakery tech, to be in fresh, to be a meat and poultry person. So pride in freshness in that one department is now spread throughout the whole store, and they are looking at things in the front of the store differently. They’re making a grocery item look fresh.” 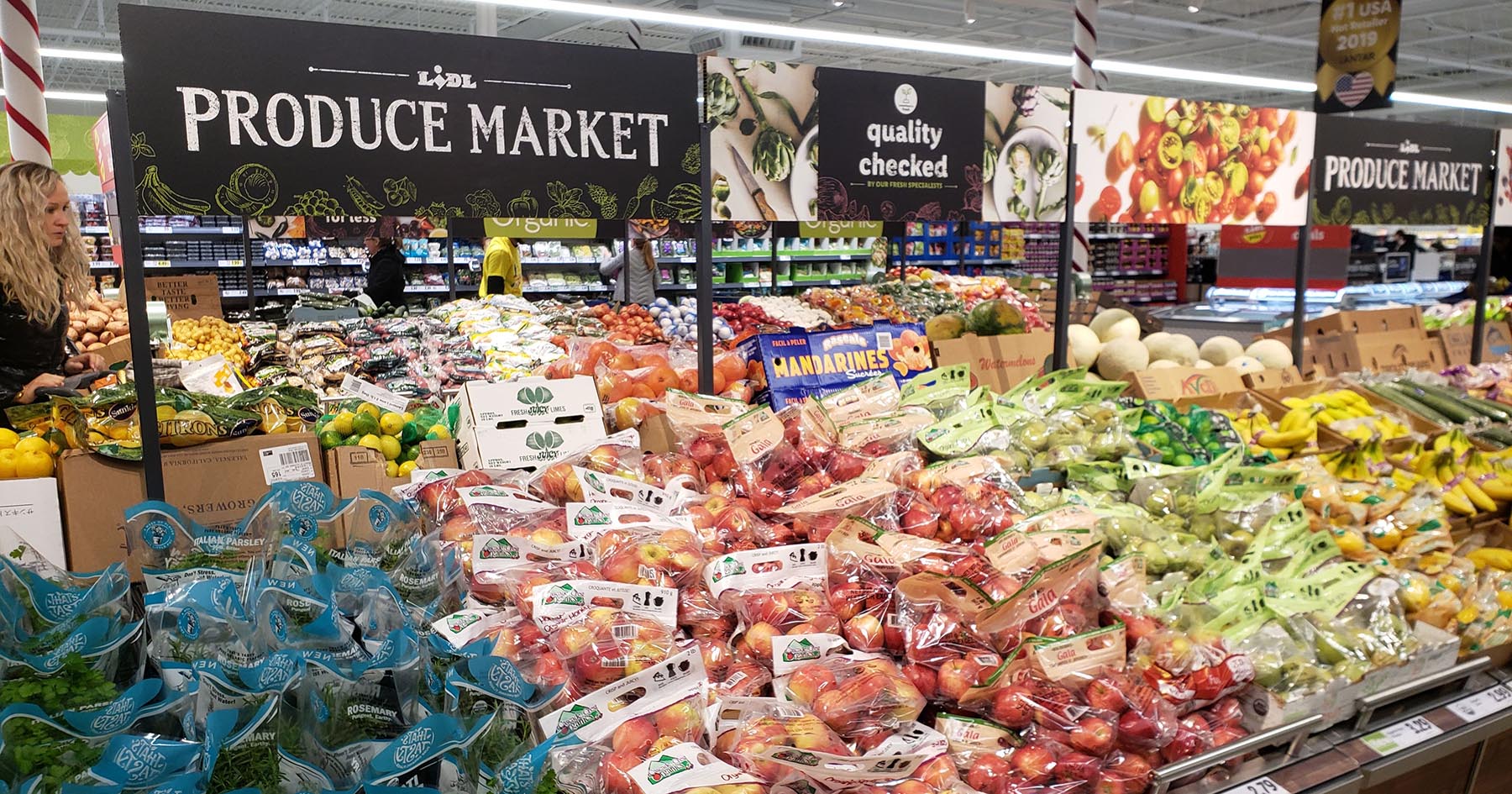 The store also represents Lidl’s continued evolution—and a new confidence that after an uneven debut two-and-a-half years ago, the chain is finally getting it right. The West Babylon opening is one of 10 new openings in 15 days. There are fewer price signs on neon-colored papers, indicating a subtler approach to communicating value. Price tags, which somewhat confusingly were placed above items in its earliest stores, now, more like counterparts, are displayed below them. Assortment has swelled from about 2,000 SKUs in its earliest stores to about 3,500 today and is headed to 4,000, with much of that fresh produce, meat and seafood.

“We feel very confident, but we’re always learning, listening to customers, taking feedback and never being satisfied,” Will Harwood, a Lidl spokesman, told WGB. “The deli is a great example of that. You have to listen. You have to be willing to adapt and change.”