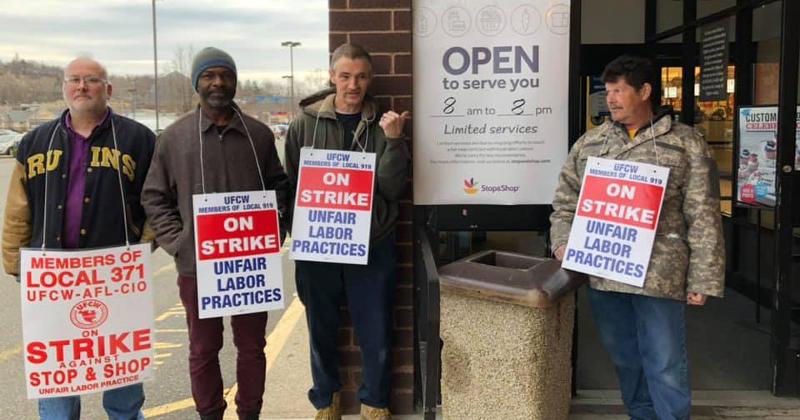 More than 30,000 Stop & Shop workers in Connecticut, Massachusetts and Rhode Island on Thursday carried through on a long-standing threat to strike, saying the company was “trying to destroy the health benefits and pension of our hard-working members,” one union leader said.

Quincy, Mass.-based Stop & Shop, a division of Ahold Delhaize, has been negotiating for months with five locals of the United Food and Commercial Workers (UFCW) union to replace a contract that expired in February. While negotiations between the parties are typically charged, union leaders have insisted for weeks that the tone appeared different this time around, characterizing the retailer’s stance as unreasonable and “drastic” given its parent company’s financial success and recent momentum, saying a job action was “inevitable.”

Stop & Shop, for its part, has been adamant about its need to get its cost structure better aligned with its nonunion competitors, which it says now controls 77% of the market in Massachusetts and Rhode Island and 68% of the food market in Connecticut. Stop & Shop is the largest single operator in those markets, however, controlling 21% of each. The parent company has detailed plans to roll out a multimillion five-year brand renewal for Stop & Shop intended to modernize all of its stores and become more price and cost competitive.

The company has proposed contracts that would require greater employee contributions to healthcare, saying the rates union members pay have not kept up with health care cost inflation. It has also proposed changes to Sunday premium pay and pay raises for some workers. Stop & Shop said it would maintain contributions to pension funds, but workers are unhappy over a proposed reduction in pension benefits for newer employees.

Stop & Shop also offered $75,000 voluntary contract buyouts for full-time workers with 25 years of service but that was contingent upon a contract ratification by April 10.

“Given that negotiations with assistance of the federal mediators are continuing, we are disappointed that the UFCW chose to order a work stoppage in an attempt to disrupt service at our stores,” Stop & Shop said in a statement.

Stop & Shop earlier in the week had published its proposals on a website so as to clear up what it called “inaccurate statements made about Stop & Shop’s positions in negotiations.”

Stop and Shop called their strike when I was in the middle of shopping... so I ditched my cart and left. Take care of your people and you’ll get my money ✌️

Although unions submitted a counterproposal earlier this week, it was a nonstarter with Stop & Shop, which said it said would increase its costs. “This would make our company less competitive in the mostly nonunion New England food retail marketplace," Stop & Shop said.

The retailer instead made “several suggestions to the federal mediators to encourage further bargaining,” shortly before workers called a strike at 1 p.m. on April 11.

Key to the success of a strike will be shoppers’ willingness to observe picket lines, which union officials believe will send a message to Stop & Shop. The company said it has “contingency plans in place to minimize disruption,” which include deploying temporary workers and corporate personnel at stores. Reports said some stores briefly closed following the strike announcement but later reopened.

Other unions, including Teamsters locals representing warehouses delivering some items to Stop & Shop stores, have pledged to honor picket lines. Workers also have the support of Stop & Shop’s unions in the New York metro area, which are also approaching negotiations for a new deal and see the New England situation as a troubling harbinger.

The last significant supermarket worker action in New England took place five years ago when Market Basket workers—who do not belong to a labor union—staged a six-week wildcat strike that helped to force a resolution to a dispute between the warring DeMoulas cousins that owned the company. That movement had strong support from shoppers and was supported by a concurrent walkout at Market Basket’s distribution facilities.

Stop & Shop last had a worker strike in 1988, a one-day walkout affecting stores in Connecticut and Western Massachusetts. Later that year, a separate truck drivers' strike affected Stop & Shop warehouses for a week.