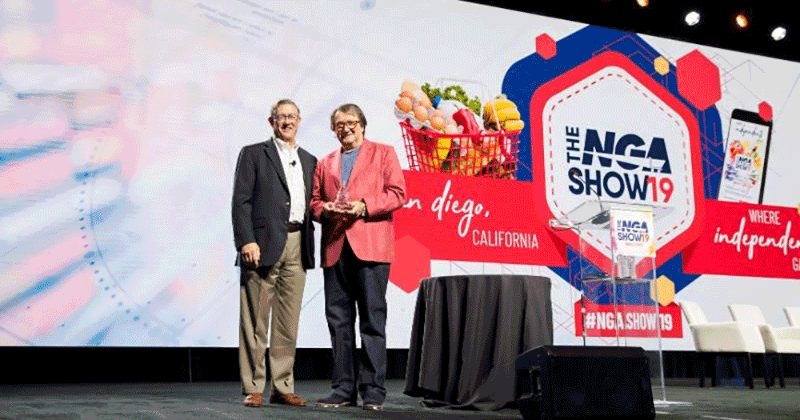 Rudy Dory, the visionary patriarch of the two-store, Bend, Ore.-based Newport Avenue Market, was honored at the 2019 NGA Show with the Clarence G. Adamy Great American Award for his participation in public affairs and advocacy.

Established in 1982, the Adamy Great American Award is NGA’s most distinguished government relations award, presented to an individual or company whose leadership in the food industry best exemplifies active and effective participation in government relations as a citizen and industry representative. The award’s namesake, Clarence Adamy, was a past president of the National Association of Food Chains and was very active in public and government affairs.

“Rudy is a tireless advocate of the independent supermarket industry by supporting a public policy agenda that benefits Main Street grocers throughout the country,” said Greg Ferrara, NGA’s EVP of advocacy, public relations and member services. “NGA commends Rudy on his achievements and looks forward to working together in the future as we continue come up with innovative ways to advance the interests of our industry.”

Since its opening in 1976, Dory’s Newport Avenue Market has been a primary choice for foodies in central Oregon. The 100% employee-owned grocer offers shoppers both mainstream and hard-to-find food items as well as kitchenware and unique gifts. An 18-time “Best Grocery Store” winner in Central Oregon by The Source Weekly’s annual community poll, Dory’s two stores support local producers and specializes in high-quality, in-demand food and beverage items, including 500 varieties of craft beer.

In other NGA Show news, the association announced the creation of the Peter J. Larkin Award for Community Service in honor of Larkin’s retirement at the end of 2019. The award will be presented annually to an independent retailer or wholesaler who demonstrates exceptional dedication and commitment to the communities he or she serves.

Larkin’s retirement from NGA at this end of this year will cap a 40-year career in the grocery industry. During his tenure at NGA, which began in 2010, the association experienced retail and wholesale membership growth as well as stronger member engagement in share groups, committees and attendance at The NGA show. Additionally, NGA’s government relations and advocacy efforts have expanded and produced numerous wins for independent supermarkets under Larkin’s leadership.

Also at the NGA Show, the association presented its new board of directors, which includes:

Appointed Board of Directors Officers and Executive Committee