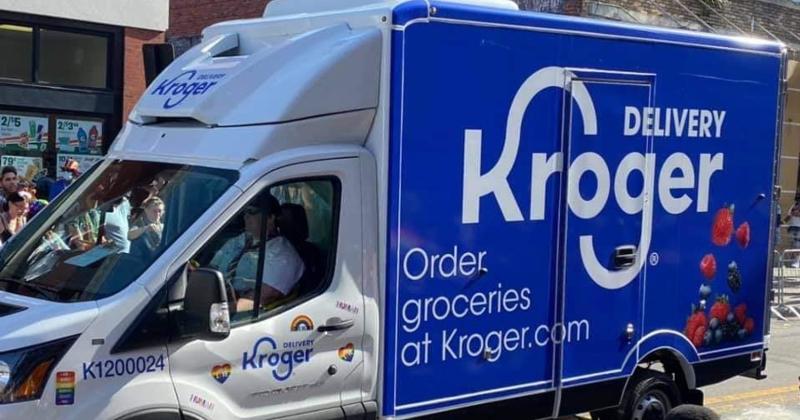 Cincinnati-based Kroger over the weekend sent a fleet its of refrigerated delivery trucks to the streets of Ybor City in Tampa as part of the city’s annual Pride Parade. The event—which Kroger participated in as a sponsor and was notable as the U.S.’ first live Pride celebration since COVID forced cancellations last year—helped to promote the retailer’s newly available grocery delivery in parts of the city.

The delivery service in Florida will be closely watched in the industry as it represents Kroger’s first virtual market expansion made possible by the opening of a massive new customer fulfillment center in Groveland, Fla., built with technology partner Ocado. The high-tech solution using robotic picking and artificial intelligence brings the brand to a market where Kroger does not have a physical grocery store presence and is part of a companywide plan to double its online sales—and the profitability of them—by 2023.

Kroger-Ocado facilities have opened recently in Monroe, Ohio and in Florida. At least nine other facilities will be built as part of the exclusive agreement between Kroger and U.K.-based Ocado, which was hatched three years ago.

Delivery remains in a test phase now in Florida but appears available in some Tampa-area ZIP codes. Enabled by the facility in Groveland, Kroger said the offering would differentiate from currently available delivery choices in Florida by eliminating the substitutions plaguing store-picked delivery orders, improving service through deployment of dedicated delivery fleets in temperature controlled trucks, and offering a “freshness guarantee” that officials have said reflects benefits of a more direct supply chain solution with some 30,000 items available.

"No surprise substitutions" is one benefit of a new delivery offering available in Florida, according to the Kroger website.

Kroger participated as a “Shwashbuckler” sponsor of the Tampa Pride event, representing a $5,000 support level. The company promoted its presence at the event through the trucks, representatives that handed out free branded grocery bags to shoppers, according a report, and T-shirts, as shown in some social media posts.

According to a current offer available to shoppers in Florida, Kroger is waiving a $9.95-per-order delivery fee for a limited time. A FAQ page on the website indicates delivery drivers for the offering would not require tips.

Kroger’s entry to Florida represents new competition for traditional grocers like Winn-Dixie and Publix as well as Walmart, Aldi, Target and others. Most of them currently offer delivery through crowdsourced drivers and associated third-party apps such as Instacart, Shipt or Uber Eats. These services are largely seen as convenient but imperfect, relying in part on unpredictable and limited store inventories and costly fulfillment practices.

An unconfirmed recent report suggests a response of sorts could come in the form of an expanded partnership between third-party delivery apps and retailers. The HNGRY blog last week said that Instacart and Publix were working together on a plan to test fulfillment from a dark store and a forthcoming automated microfulfillment center to be operated by Fabric. The report, which did not identify locations for the facilities, was said to be based on an internal Instacart memo obtained by HNGRY. Neither Publix nor Instacart responded to WGB’s requests for comment. A Fabric representative and a consultant cited in the HNGRY story declined to comment.

Instacart had previously acknowledged it was seeking technology partners in service of retail partners. Sources told WGB earlier this year that the San Francisco tech company was relying in part on the counsel of Mark Ibbotson, a former top technology executive at Walmart, as it evaluated options.