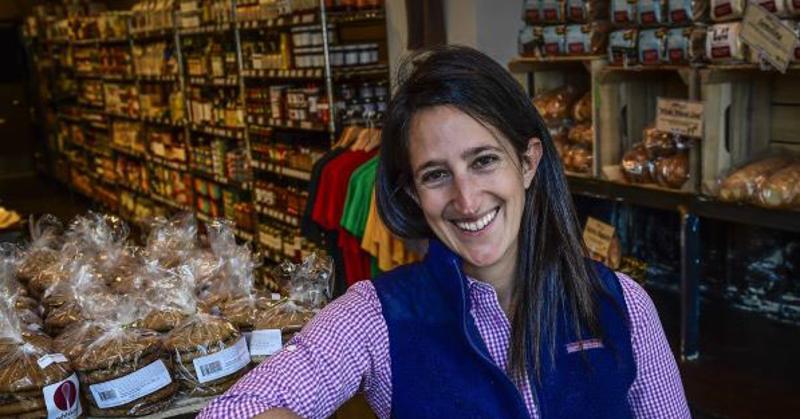 Danielle Vogel is the founder and owner of Glen’s Garden Market in Washington, D.C. Her family’s history in the grocery business goes back four generations, but before launching Glen’s Garden, Vogel worked on Capitol Hill—for 10 years she was a policy adviser to Democrats and Republicans. She also worked as an environmental litigator for the U.S. Justice Department. When Vogel opened Glen’s Garden Market in 2013, she sought to have the store serve as a community hub—a go-to for locally sourced, sustainability-focused products in D.C.’s vibrant Dupont Circle neighborhood.

On Jan. 6, Vogel raced from her home to the market upon learning that the Capitol building had been breached by protesters rioting against President Donald Trump’s election loss. Vogel spoke with WGB about what transpired that day, the community of customers and other independent grocery owners rallying behind Glen’s Garden Market, and her outlook for 2021.

Christine LaFave Grace: First off, how are you doing at the start of this week?

Danielle Vogel: It’s been a rough while, but it is what it is.

Can you take me through what Jan. 6 was like for you?

I worked on Capitol Hill for a decade, so I have a perspective that’s quite nuanced on what went down last week. And it’s certainly informed by a deep and abiding respect for the Capitol building and the business that transpires therein.

[On Jan. 6], I needed to make some quick decisions in order to protect our staff and certainly our community. But at the same, I was having very personal reactions and feelings about what was happening. I was watching CNN as it was unfolding. I was actually not supposed to be at work that day; I went charging over to the store to figure out what we were going to do. [D.C. Mayor Muriel Bowser] shortly thereafter issued her curfew.

We’re 19 blocks from the Capitol, which is a pretty good distance—D.C. is a small town—but at the same time, I’ve got people that work at the store and people that shop at the store that are coming from all parts of D.C. and beyond. We were able to assess quickly that the people working that evening were all going to commute by foot; they all live within walking distance.

The original [plan] we made was that we would honor the curfew by closing at 5:45 p.m.; the curfew started at 6 p.m., so that gave everyone enough time to get home. The staff felt that they were uncomfortable being out after dark, so we quickly amended our plan to close instead at 4:30 on [Jan. 6]. Part of the reason why we really wanted to make that happen was because there were rumors that the Proud Boys were staying at a hotel in Adams Morgan, and three of the four people working that night live in that neighborhood.

Did any employees express concern or hesitation about coming in that day?

No. We’re nine months into COVID; our crew is extremely tight, and I know that they felt a need to be there for each other. Even though they knew what was going on as they were walking to work, we all arrived with the mentality of, “How do we get through this safely?”

It’s been nine months of extreme togetherness and helping each other out and making sure that everyone else feels comfortable and safe.

After Jan. 6, how are you looking at the next two weeks, through the inauguration, whether in regard to operational challenges or staffing or just, as you say, being there for each other?

I’ve got priorities in this order: One, the safety and security of my staff. No. 2, the community of vendors we’ve built, and then No. 3, of course, is nourishing our neighborhood, so all of our decisions are filtered through [those].

Have you had customers or other members of the community calling or stopping by just to check in?

Yeah—it’s the wide range of responses that people have, right? There are definitely people that are expressing concern. When we announced that we were shutting down quickly, it was, “Is the store sold out?” Because people were trying to get their stuff, and we didn’t know if we’d be on lockdown for a couple of days. But there were definitely people coming through in the final hour being like, “What’s all the commotion?” Like, seriously? You live in Washington!

The answer needs to be nuanced. There are a lot of factors in play here. What gives me hope is Mayor Bowser has put us second on line for the vaccine, so my squad is going to get their shots in February. Never ever did we think that our job working in a grocery store was going to save our life, but here we are. That is the most spectacular development I could have imagined after the last nine months.

What gives me pause is the math* problem is substantial. We’re still operating under a partial shutdown, to put it mildly. We are a grocery store, certainly, but we used to be an activated robust community center with a beer bar and this amazing deli and an active patio, and that’s just not happening right now. Obviously the bar is closed, and the deli is operating under very limited hours. And while we could legally reopen the patio and reopen the deli in a little more of a broad way, I made a judgment on behalf of the community that it was more important that they have a safe place to shop for groceries. I didn’t want people needing to sort of navigate through a plume of exhalants on their way into their grocery store.

We worked really hard to make it a very safe place to shop, including enforcing a 15-person capacity limit. We’ve got a 10,000-square-foot store; that’s far beyond what is required by law. I’ve got my team on a split schedule and we have [been] since March. We are going to continue to operate this way until it is safe to change course, and that is probably another nine, 10 months from now. It’s difficult to operate a grocery store that used to depend on the high-margin elements of the business and those aren’t there anymore. Especially at a time when, you can imagine, I want to pay our staff as well as we possibly can. We are at a $17 base right now; that’s unreal in the industry. I provide subsidized healthcare to every single member of my staff, full and part time. I feed them every single day a free meal. And I’ve doubled the employee discount to 40% so that everyone can have ready access to safe and healthy food when it’s hard to come by elsewhere. But what that means is we’re selling our food to our team at a loss. And it’s my pleasure to do it and it’s the right thing to do, but it’s an expensive way to operate a small business.

There are people that just don’t understand the complexity of [this]. They say, “Well, I don’t understand why you don’t just open the patio.” Because—I do not want my staff reaching toward an unmasked table, No. 1. No. 2, I don’t need to serve a couple of beers on the patio to a guy who then forgets to put on his mask when he gets up to go to the bathroom. I don’t need it. It’s not the buck we need to make.

You worked on Capitol Hill. If you had an audience with the new Congress, as a small-business owner, what would be your top ask for the year ahead?

There are two things. The first is a thank you, which is how you always start with a politician if you want to get anywhere. The thank you is for the employee retention tax credit amendment that they made in the second stimulus. This is the sleeper salvation for us.

In the first stimulus … if you took the PPP (Paycheck Protection Program), you could not also avail yourself of the tax credit. We took the PPP, which was great for the weeks that we were able to burn it up, but we burned it up quickly, as everyone else did. We spent the next several months worried that we would be excluded from the second round of PPP. We were in fact excluded. Not great. As bad as it is, it wasn’t bad enough, according to their calculations. But [in the second stimulus], they made the benefit retroactive and regardless of whether you had availed yourself of the PPP. That’s going to end up making some real liquid capital available to us at a time when we need it very, very desperately.

In terms of an ask, I might ask them to reconsider the calibration for the next round of PPP should they make more available. The 25% threshold does not work for our industry. It is notorious that grocery stores operate on a razor-thin margin. If we were down 25%, there is absolutely no way that any of us could be feeding our communities, but that doesn’t mean we’re not hurting in a very substantial way. There needs to be a more nuanced calculation that takes a broader view of the businesses that are applying for the loan.

I worked policy for 10 years; it should be complicated. Anything that’s a really simple, elegant solution is probably the wrong one. So that would be my ask—that they take a more nuanced view of PPP eligibility.

What else, in this moment, would you care to add?

I just want to say to [my colleagues and peers] that none of us are doing this alone. All of us are having to make the same tough calls without any national leadership, and it has been really, really comforting to be here for each other. On Jan. 6, when the Capitol was under siege, Sam Mogannam, the founder of [San Francisco-based market] Bi-Rite, picked up the phone and called me. I heard from grocers all over the country. We’ve been touching base with each other regularly, because there’s no road map for any of this. The grocer community, which feels generally pretty competitive at the higher levels but has always been very collaborative at the local grocer level, has really come through for each other in a way that has been simultaneously comforting and deeply informative.

*Editor's note: Due to a transcription error, an earlier version of this story mistakenly used the word "mask."