Tom Criss isn’t much an outdoorsman and is afraid of heights. And spending more than a week living in a tent atop a trailer in a parking lot wasn’t even his idea.

“It was my idea,” says Angie Criss, Tom’s wife of 20 years and co-owner of their Grocery Outlet store in the Central Oregon town of Myrtle Creek.

That idea—to acquire an empty 53-foot trailer and live on top of it until it was packed full of donated groceries—is how the Criss family came to approach Grocery Outlet’s annual Independence From Hunger event, which calls on the energy and creativity of its independent owners to raise cash and non-perishable donations to benefit food banks in their communities around the July 4 holiday. By the morning of July 8, Tom's reluctant eight-day campout had nearly filled the trailer beneath him. That would be 26 pallets of donated food, which Angie estimates to be worth somewhere in the neighborhood of $45,000. 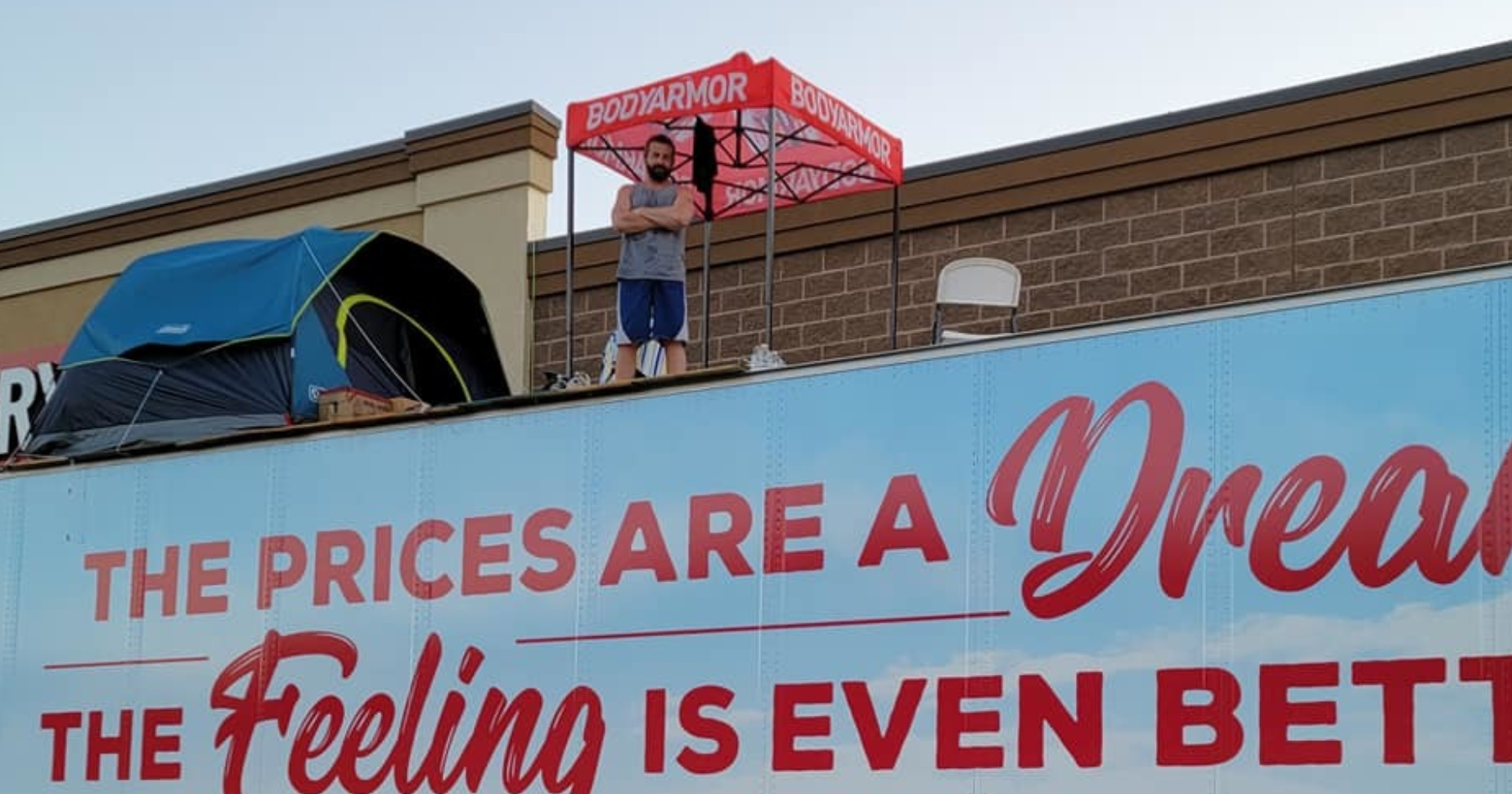 Tom Criss as of July 8 had spent eight days and seven nights atop a trailer at his Grocery Outlet store in Myrtle Creek, Ore.

This year markets the 11th annual Independence From Hunger event for Grocery Outlet, and the Criss family’s third since becoming Grocery Outlet owners. Companywide campaigns since 2011 have raised more than $11 million, while highlighting the best elements of what the company considers its unique advantage in the grocery wars: local owners, often husband-and-wife teams, bringing their own energy to the business of selling discounted groceries while authentically embodying a role as community-focused businesspeople. Angie had years of retail experience with Petco, and Tom was an accountant, prior to a joint career switch that made them Grocery Outlet owners.

Angie says the idea of camping out to promote the event was patterned after a similar promotion she had heard on a Seattle radio station, which raised funds for a children’s hospital by broadcasting from a trailer-top several years ago. The program hit especially hard as their own son had been hospitalized for nearly a year with a serious medical condition.

“I was listening to that telethon and I probably cried for three days,” she recalls. “I had Tom on the phone, making a different pledge donation for every new story that I was touched by. That was like 15 years ago. And I just remember thinking, I want to someday be part of something that big, that brings that many people together to help.”

Hunger relief? That too has a personal edge.

“Tom and I, we were food-bank kids. We struggled, we remember our family struggling, and getting that can of hamburger gravy from the food pantry. Now, we’re in a position to pay that back when so many people helped us,” she says. “So I felt like we have to go big, in order to at least make a dent in the debt that we owe everybody that helped us when we needed it, from when we were kids to when we were taking care of our kids.”

Angie says she had every intention of setting up home atop the trailer herself but in the kind of compromise any loving couple could recognize, Tom volunteered instead, arguing that his enthusiastic wife would do a better job creating attention for the stunt on the ground than he could had she been stuck up there, given his more-reserved nature. And that arrangement has worked—for the most part.

“We haven’t camped in any of the 25 years we’ve been together. So it’s definitely been out of the comfort zone of anything that he’s ever done,” Angie says of Tom. “He figured he could read a book and get some quiet, but we’re on the side of an interstate so that hasn’t really happened. So he’s got a little bit of cabin fever.”

A spare trailer, washed and polished, was provided by the company and sits alongside the store in its parking lot. On top, Tom has a small tent holding an inflatable mattress, a kiddie pool to keep him cool during the unusually warm summer days, and some exercise bands because in normal circumstances he rarely misses a day at the gym. He has a chair, some books, a separate sun shade, and about 4 feet by 6 feet in which to walk around. There’s also a portable toilet (“That’s the one thing I did not budget for,” Angie laughs. “I was like, we’ll pay whatever it takes. I’ll be frugal on the mattress, I'll be frugal on the tent—but this is where we’re spending the money.”)

Sure enough, he’s become an attraction. On a recent warm day, a volunteer fire company gave him a much-needed “shower” from their firehose—the firefighters also volunteered to match donations and act as volunteer baggers in the store. Donations have poured from suppliers like Bimbo Bakeries, which dropped off six stacked rollcarts of buns and breads. Even a competing retailer, Winco Foods, stepped up with a donation of two pallets of toiletries. 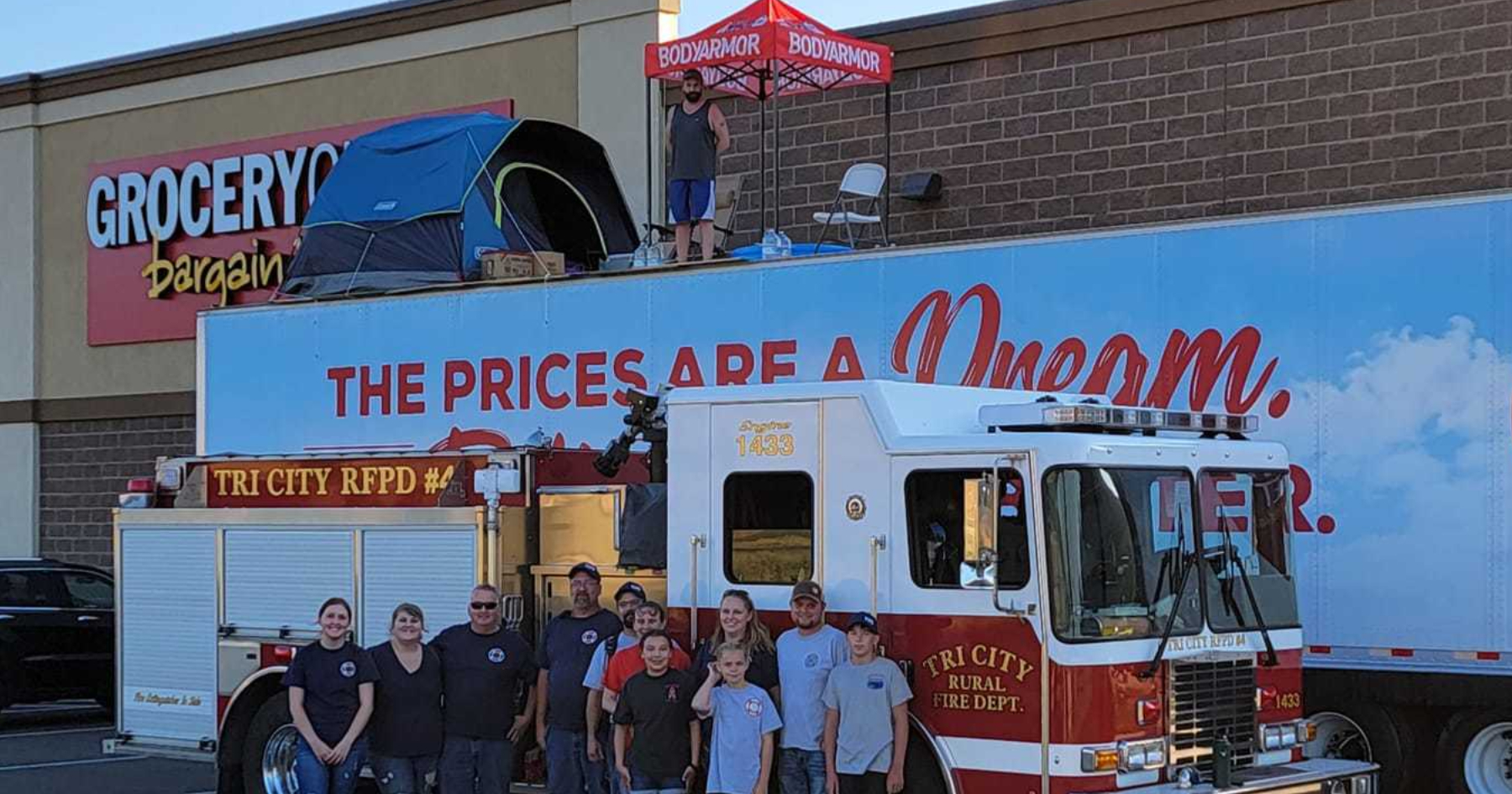 Local firefighters showed up to support the Independence From Hunger event, and gave Tom Criss a much-needed firehouse shower.

Much of the fuel is coming from the store’s shoppers who are participating in auctions, rounding up purchases, and taking advantage of companywide offers like a $5 coupon in exchange for a $5 donation. Angie said she initially planned to spend the donations on goods directly off the store shelves but the fund volume has allowed her to buy pallets from the warehouse instead. “We have a pallet of pasta noodles that run $700,” she explains. “So as soon as I get $700 through that register, we pull that pallet and put it right on the truck.”

When I reached Angie by phone on the morning of July 8, she told me they were three pallets short of a truckload but she was confident her anxious husband would soon descend if not that afternoon, then by evening when the store is a participating sponsor in an community concert.

“I’ll be there with my cardboard sign and a coffee can, saying, ‘Please fill the bucket and save my husband, Tom!’ Angie says. “We never been apart this long in 25 years.”

By then, a once-empty trailer turned into a temporary home will pull off as a packed lifeline for a needy community. What a way to come together. 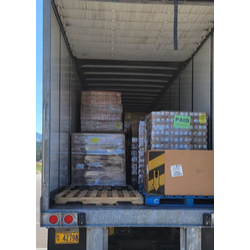