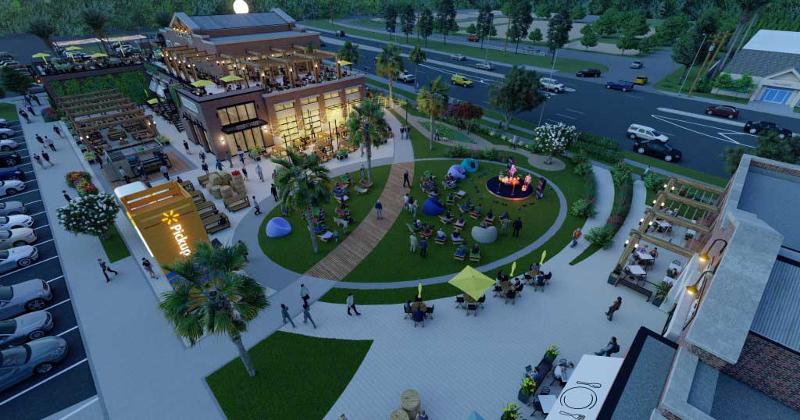 Walmart intends to transform parking fields and land adjacent to some of its Supercenters behind a radical new “town center” concept that would lease space to restaurants, services, entertainment options and other community uses.

The move would take advantage of Walmart’s traffic draw and massive physical footprints to create experiential retail hubs not unlike shopping malls as the company contemplates how physical shopping could evolve amid growth of e-commerce. The projects could also help cast a new shadow for the Walmart brand, which is also using the omnichannel revolution to widen its appeal to new audiences, even as virtual shopping wears away store trips.

According to a website, the company is making plans to bring the town center concept – which it calls “Reimagined Centers” – to eight of its Supercenters, including a site in Loveland, Colo., where the chain will reportedly break ground next spring. Other such concepts are planned for Supercenters in Springfield, Mo.; Windsor Heights, Iowa; Rogers, Ark.; Garland, Texas; Gresham, Ore.; Long Beach, Calif.; and Lees Summit, Mo. More than 10 additional Walmart Supercenter sites in other cities would get various interpretations of the new concept, including some built around food trucks and community parks.

The program was announced during a presentation at an International Council of Shopping Centers event this week in Atlanta by LB Johnson, VP of U.S. Realty Operations for Walmart, according to local coverage in the Atlanta Business Chronicle.

“We want to provide community space, areas for the community to dwell – a farmers market, an Easter egg hunt, trick-or-treating,” the journal quoted Johnson as saying. “We want to provide pedestrian connectivity from our box to the experiential zones that are planned on our footprint. We want to augment these experiences and activities with more food and beverage, with health and fitness, essential services and entertainment.”

The website shows renderings and computer simulations contemplating parking fields transformed behind fitness facilities and playgrounds, farmers markets, food trucks and open-air dining, and landscaped plazas with jogging paths. It also shows new retail buildings adjacent to existing Walmart stores with restaurant and coffee shops, gyms, movie theaters and other retail tenants. Some stores including the Loveland location would include what the company called “revolutionary” container parks outside the store where vendors would “have an opportunity to be immersed in the community through easily accessible storage container-based facilities.”

Other locations could see space inside existing Supercenters leased to restaurants, bars and food halls. This could address the question as to whether Walmart’s stores – initially designed for physical shopping experiences – are simply too large to be efficient in an omnichannel shopping world.

It is not clear what the cost of the transformations would be or when the projects would be complete, but Walmart said it would work with cities and business partners on each project.

“A transformation is underway,” Johnson said, according to the Business Journal. “We are working with the local community to really master plan a vision, not only for Walmart, but shared with the municipality. We are using terms like collaboration space. We are thinking through dwelling space. ... We are going to hold ourselves accountable to the community to improving well-being.”