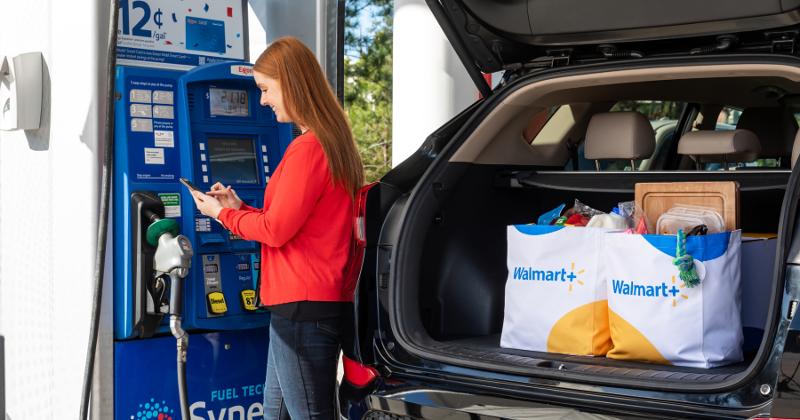 As fuel prices remain high across the country, Walmart is offering members of Walmart+ a discount of 10 cents on every gallon of fuel purchased at participating fuel stations.

The retailer launched the program April 27, and the discount is available at more than 14,000 gas stations across the country with the recent addition of 12,000 Exxon and Mobil locations—a more than six-fold increase, Bentonville, Ark.-based Walmart said in a release.

While members save 10 cents per gallon at participating Exxon and Mobil locations, they will receive an additional 5 to 10 cents per gallon (based on state regulations) at Walmart and Murphy USA stations. Member pricing is also available at more than 500 Sam’s Club locations.

“Ninety-one percent of our customers are aware of the increased prices at the pump and nearly half of those told us they are changing behaviors because of them,” said Chris Cracchiolo, SVP and general manager of Walmart+. “More access to a bigger discount will make a difference for our customers.”

The new Walmart+ fuel benefit is available via Walmart’s app.

“We know that families want to maximize their budgets and look forward to helping them do just that while filling up with Synergy fuel technology that helps improve fuel economy, protect engines and enables better vehicle responsiveness,” said Bill Barenborg, U.S. marketing manager for ExxonMobil.

Earlier this month, Sam’s Club, whose parent company is Walmart, announced additional rewards for drivers of electric vehicles (EVs). Beginning May 1, members with a Sam’s Club Mastercard will earn 5% back in Sam’s Cash on EV charges at eligible EV charging stations in the U.S. During May, cardholders will also earn an additional 5% back on EV charges for a total of 10% back in Sam’s Cash, a loyalty rewards program launched earlier this year.