On the heels of Winsight Grocery Business’ inaugural Grocery Digital Maturity Benchmark study comes a report gauging consumer sentiments from the Lake Success, N.Y.-based Retail Feedback Group (RFG), whose new data reveals that Walmart is surging ahead of Amazon as the most preferred online grocery provider.

More than half of the shoppers participating in RFG’s 2019 U.S. Online Grocery Shopper Study reported that they’ve either tried or shopped with only one online grocery provider in the past 12 months. Of that panel, 37% have turned to Walmart for online groceries. The Bentonville, Ark.-based chain’s digital grocery dominance paced Amazon’s 29% penetration among shoppers who identified the provider they’ve used on their most recent online grocery shopping experience.

Overall study data revealed about 20% of RFG’s panelists shop mostly or only online for food and groceries, while 32%  shop online and in-store about equally, and 48% mostly shop in-store and occasionally online for food and groceries. Fulfillment by curbside pickup is also picking up, with 47% of those surveyed now indicating their orders were picked up (compared to 43% last year). Supermarkets/food stores (22%) held about even with last year, registering the highest percentage of shoppers (22%) indicating first-time use for online grocery shopping.

When evaluating overall satisfaction among those buying food and grocery items online, RFG’s study insights found that Amazon (at 4.60, a drop from 4.70 last year) still garners the highest score on a five-point scale, where five is the highest, followed by Walmart (4.45, a drop from 4.54 last year) and supermarkets/food stores (4.43, an improvement from last year’s 4.36 points).

Interestingly, RFG’s data found that shoppers with orders fulfilled by Instacart have an overall satisfaction score of 4.58, similar to that of Amazon, and higher than both Walmart and supermarkets/food stores. 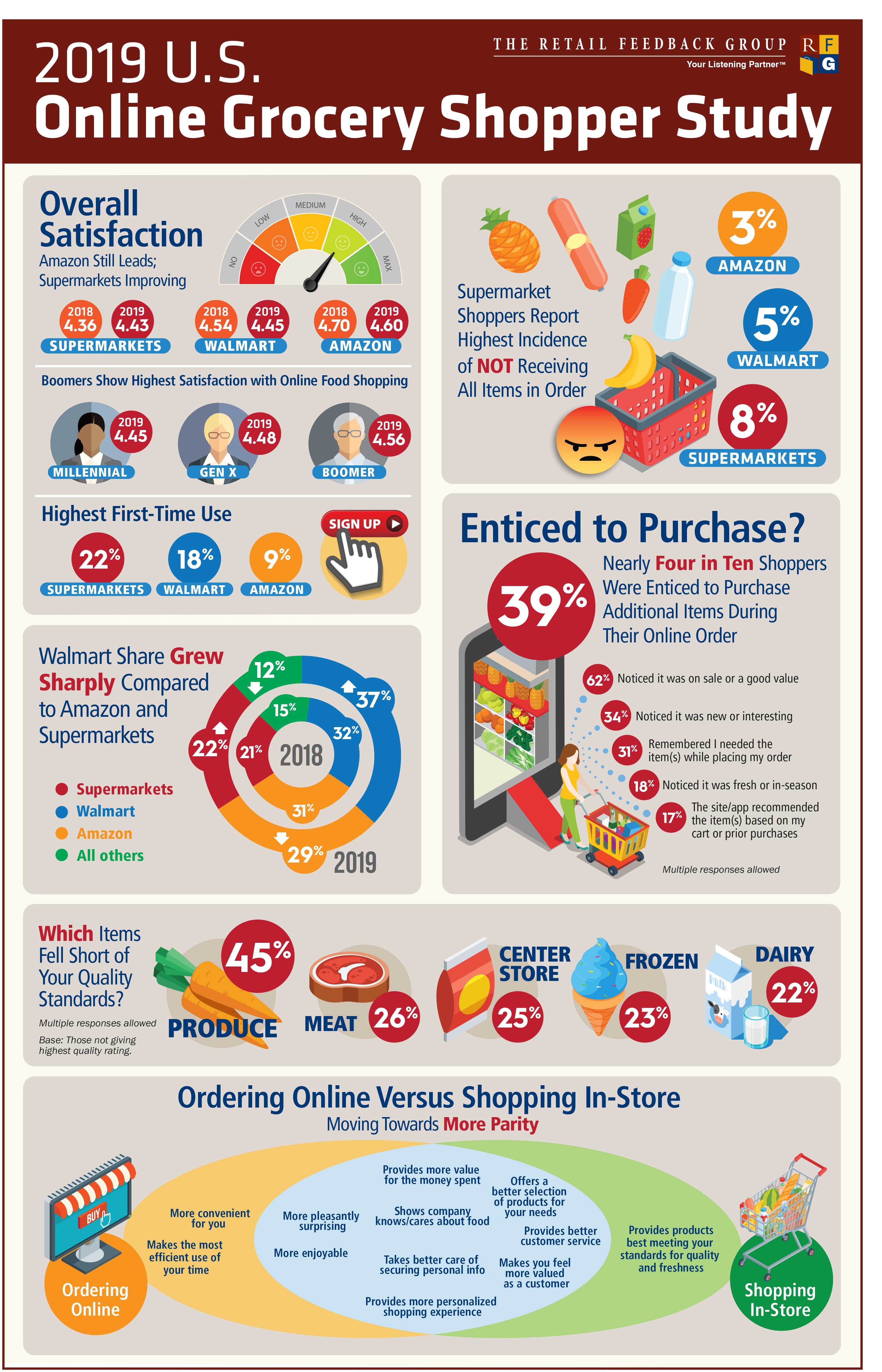 As Walmart increases its focus on online grocery shopping, RFG Principal Brian Numainville said, “It appears to be resulting in more trial given the surge in shoppers reporting using Walmart for their most recent online grocery shopping experience, beating out Amazon. At the same time, supermarkets/food stores also appear to be gaining ground in increased overall satisfaction, as compared to last year, and now register the highest percentage of first-time users, showing positive momentum for the channel.”

• Amazon Shoppers: Rated six of the 12 elements of the online shopping experience significantly higher as compared to how supermarket/food store shoppers and Walmart shoppers rated their providers.

• Supermarket/Food Store Shoppers: While this cohort still recorded lower satisfaction scores on about half of the elements measured vs. Amazon and Walmart online grocery shoppers, there was increased parity with shoppers of these other providers on five elements.

• Instacart Shoppers: Of the 53% of shoppers who indicated their order was fulfilled by delivery, about one-fourth of those had deliveries that were handled by Instacart. Shoppers who had orders filled by Instacart rated just two factors considerably higher than supermarkets/food stores.

Efficiency and convenience remain hallmarks of online food and grocery shopping, coupled with, to a lesser extent, an enjoyable and pleasantly surprising experience. On the other hand, providing products best meeting standards for quality and freshness remain somewhat of an advantage for in-store shopping. In general, however, it appears that the differences between online and in-store food shopping are moving to more equivalence in the minds of shoppers, Numainville said, adding that for seven of the 12 factors measured, 50% or more of shoppers find the factors are equal for both types of shopping.

The results of this year’s study—which are based on a nationally representative sample of 1,000 respondents who shopped online for food and groceries in the past 30 days—“show that the growth and maturation of online grocery shopping continues to erode the advantage once held by the shopping experience at a physical store,” according to RFG Principal Doug Madenberg, who said the finding—that 71% of shoppers who now indicate that companies who demonstrate knowledge and a commitment to food is equal for both online ordering and shopping in-store—is also telling.

Shoppers were asked if they were enticed to purchase additional items during their online order. Of the 39% that answered affirmatively, the top reasons (multiple responses allowed) were “noticed it was on sale or a good value” (62%); “noticed it was new or interesting” (34%); "remembered I needed the item(s) while placing my order" (31%); and "noticed it was fresh or in-season" (18%) or "the site/app recommended the item(s) based on my cart or prior purchases" (17%).

“Based on the study findings, it appears that shopping online for fresh items is now a more accepted part of the online grocery shopping experience,” Madenberg said. "This growth may be a combination of a broader cross section of shoppers engaging in online shopping, as well as more experience by online providers in successfully meeting the expectations of consumers in these departments. At the same time, among those shoppers not giving top marks for meeting standards for quality and freshness, produce is the department with the highest percentage of mentions (45%).”

RFG’s principals also said bakery insights from the study were also revealing, including the fact that about 8 out of 10 online shoppers (82%) indicated that freshness was the top factor they consider very important when purchasing bakery online, followed by quality (68%) and price (51%). Among those who do not purchase bakery online, the top reasons cited were wanting to choose bakery items themselves (57%) or that bakery items might not arrive fresh (45%) or have a good shelf life date (36%). Breads and cookies were the top items shoppers indicated purchasing online.

Grocery and distributors can obtain a free copy of the full report or request an interview/presentation of the results from the principals of Retail Feedback Group by emailing report@retailfeedback.com.