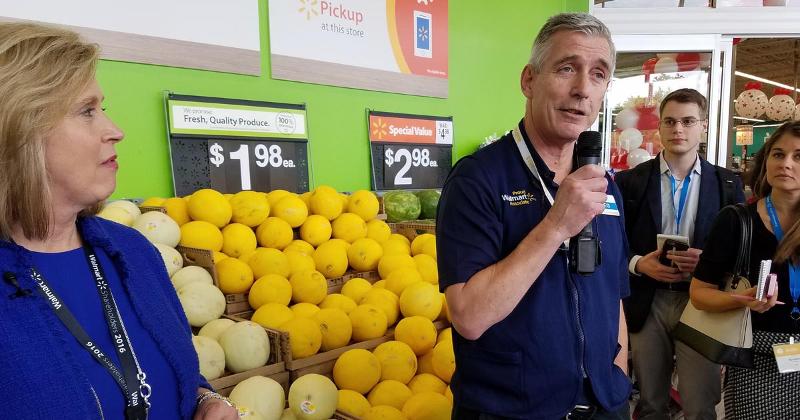 Greg Foran, the New Zealand merchant who was integral in reinventing Walmart’s U.S. stores—particularly around food and service—and who sparked the mass retailer’s new trajectory, is departing his role as U.S. CEO, effective Nov. 1.

John Furner, current CEO of Walmart’s Sam’s Club membership warehouse division, will succeed Foran, who will stay with the Bentonville, Ark.-based retailer through Jan. 31 next year to ensure a smooth transition. Foran is leaving Walmart for an opportunity to lead Air New Zealand Limited. He has been CEO of Walmart U.S. since August 2014; he first joined Walmart in October 2011.

“Greg Foran has made a huge difference for Walmart, and we are grateful,” Walmart CEO Doug McMillon said in a release. “He built a strong plan from the beginning to strengthen the U.S. business—a plan that made significant choices around investing in wages and benefits for associates and investing in price for customers. Greg’s ability to innovate, whether it’s making our stores a competitive advantage in an omnichannel environment or equipping associates with next-generation technology and training, has helped position us for the future. The results have been impressive: Every quarter he led Walmart U.S., it has had positive comps. Before leading us to a stronger position in the U.S., he did the same thing in China. We will miss Greg and thank him for his leadership. He has made a difference for our customers, associates and shareholders.”

Foran took particular interest in fresh food presentation and quality at Walmart, believing that was one of the retailer’s major shortcomings as he came aboard as U.S. CEO, succeeding Bill Simon at a time when Walmart’s same-store sales had slowed and was losing share to conventional retailers and discounters. He put emphasis on improving the selection and what he called the basic execution in food. To that, he advocated for improved wages for workers, cleaner and better organized stores and initiatives in training and worker development that improved service and retention.

When Foran was satisfied that stores were cleaned up and the basics improved, he turned to price investments and that coincided with a reversal in same-store sales at Walmart. Appearing to be more comfortable walking the aisles of stores—where he was known to wear a vest and nametag just like employees—than in the public-facing role as CEO, Foran described himself as a “demanding but fair” leader. In interviews, he was more likely to demonstrate a remarkable knowledge of the details of retail than to produce a soundbite.

Online grocery became a differentiating strength for Walmart under Foran, with pickup and delivery options quickly expanding throughout his tenure.

Recent reports indicated, however, there was some tension between Foran and Marc Lore, Walmart’s CEO of e-commerce, over resources they absorbed to grow the business. Walmart’s overall e-commerce operation is large and growing but still loses money. Walmart’s release announcing Foran’s departure pointedly said Furner would partner with Lore “to deliver a seamless omnichannel experience for Walmart’s U.S. customers.”

Furner started with Walmart as an hourly associate in 1993, working part time in the garden center of a Supercenter. He worked his way up through a number of frontline leadership roles, later becoming a store manager, district manager and buyer.

“John has done a fantastic job at Sam’s Club, and he will continue the momentum we have in Walmart U.S.,” McMillon said. “John knows our business well, having held many different jobs in the company over more than 25 years, and he is helping transform it for the future. He has the experience and judgment to know what we should continue doing and what we should change. He embraces technology and new ways of working, and he keeps our customers and Sam’s Club members at the center of everything we do, while delivering results for the business. I look forward to seeing his impact for our customers and associates in Walmart U.S.”

“I’m grateful for this opportunity and ready to get started,” said Furner. “There’s no better place than Walmart U.S. to touch the lives of millions of customers and associates. Together, with the team, we will build on the progress under Greg’s leadership and continue to make Walmart an even better place to work and shop. I also want to thank the Sam’s Club team. My years with you have been amazing.”

“It has been an honor to lead the team at Walmart U.S.,” said Foran. “I’m proud of what we’ve been able to achieve at a unique moment for retail and want to thank the associates who made it happen. It is bittersweet to leave Walmart, but this incredible opportunity to lead an iconic Kiwi brand was one I could not pass up, and I’m looking forward to this next chapter.”

Walmart said it would announce Furner’s successor as president and CEO of Sam’s Club at a later date.