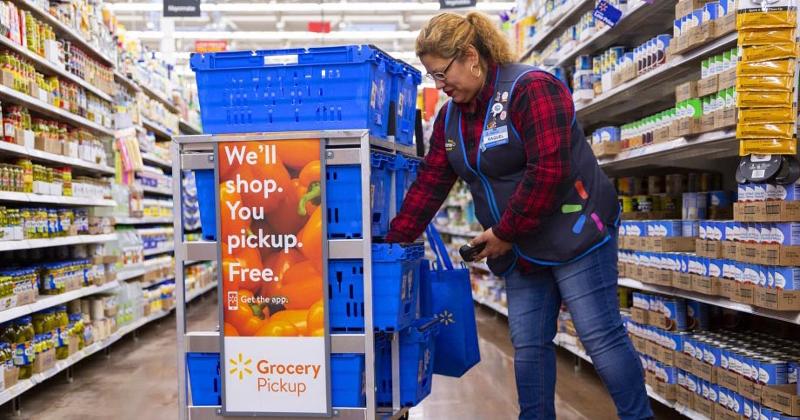 Walmart, which has used grocery as a base to build a fast-growing omnichannel business, is preparing to build the basket.

Officials in a presentation for investors this week made a point of intentions to get more general merchandise into their shoppers’ orders for pickup and delivery. That will help address some sales softness in the latter category, better utilize its stores as distribution hubs, and importantly, bring a better margin profile to its orders to go, which while building momentum continues to weigh on costs at the Bentonville, Ark.-based retailer.

“As we’re making the most of our stores, we’re strengthening Walmart.com,” CEO Doug McMillon said, according to a Sentieo transcript. “While our customer scores reflect the progress we’ve made on pickup and delivery, we’re far from satisfied. It’s not only important because customers want access to a broad assortment delivered accurately and quickly but we need the margin and profitability of a large e-commerce general merchandise business, and that includes a well-run marketplace supported by fulfillment services. Our interests are aligned with our customers and marketplace sellers. The losses we’re experiencing today are necessary to build a business model that can compete and avoid being out-mixed.”

Officials said the initiative would bring the “orange” (grocery) and “blue” (Walmart.com) apps together, although the timing was not made entirely clear. “I really do appreciate how everybody has worked together these last few years, but there’s a whole other gear to get to, to make this happen in a faster way,” McMillon added.

The investor presentation came after the big retailer revealed it had missed financial expectations during its fiscal fourth quarter, in part because of softness in general merchandise categories and slower-than-expected store traffic during December. Walmart also encountered what McMillon described as “self-inflicted” employee scheduling headaches during the period. “We changed our attendance policy and tied it to our incentive plans, and people really showed up to work,” he explained. “We anticipated that we would see that, but not to the extent that it happened.”

U.S. sales during the period, which ended Jan. 31, improved by 1.9% to $92.3 billion, and non-fuel comps improved by 1.9% on a 1% increase in average transaction size and a 0.9% increase in traffic. And while grocery and consumable sales were strong, McMillon confessed that general merchandise sales were slower than anticipated in categories like apparel, toys, gaming and media. U.S. adjusted operating profit came in slightly worse than expected at $4.9 billion, down by 3.8% from last year’s fourth quarter; and earning per share missed consensus estimates by 5 cents.

A sunnier financial forecast for the new fiscal year helped to allay investor worry. The company expects U.S. comps to grow by 2.5% excluding fuel and e-commerce to grow by 30% in the year. The company also said it expected that losses from its heavy investments in technology would stabilize this year.

During the quarter, McMillon noted that the chain’s apparel offering was probably too heavy on items like holiday sweaters, and he noted weakness in toys where sub-$5 items like toy mayonnaise jars were the biggest sellers. That signaled that assortments could change under newly named chief merchandising officer Scott McCall, who succeeded Steve Bratspies. Officials signaled that price investments in some general merchandise items were likely this year, and they would assess brands that might be too widely spread over quality levels, price levels and sizing.

John Furner, who took over late last year as U.S. CEO, said an integrated e-commerce offering would better mirror how customers tend to shop in stores, describing encountering “friction” when putting together an order that would include sporting goods and meat, for example.

Improving the seamlessness in online ordering would help the company better manage results –which he outlined as one of his three priorities for the U.S. business this year. Building on existing strengths and “innovating for the future,” are the others.

He took stock of improvements to the core offering at Walmart enacted under predecessor Greg Foran, saying better worker pay and training, improvements in fresh food quality, assortment and presentation, and price investments particularly in grocery that narrowed gaps with discount competitors have helped to deliver its current momentum. Worker retention has improved by 15% over the last five years while comps have improved in 22 consecutive quarters and expenses have been leveraged over 12 straight periods, he said.

Furner, who previously headed up Walmart’s Sam’s Club division, was enthusiastic about how that chain unleashed a slew of technology improvements providing easier shopping for members and productivity for employees. For example, the Ask Sam app that lets employees find answers to questions on the spot using voice, “is a big opportunity for the Walmart U.S. business.”

The micropick center Alphabot, now testing at a Walmart in Salem, N.H., is on its way to “a couple” more locations this year, while shelf-scanning robots are headed to another 1,000 stores this year and the company’s FAST unloader – a productivity technology speeding items from truck to the shelf, will reach more than 2,000 stores this year.

Spark Gets A Callout; Great Workplace Does Not

The company offered an update on its Spark Delivery initiative. Announced two years ago, the fleet of contracted drivers to fulfill e-commerce deliveries has now grown to 31 states and is doing more than 30,000 deliveries a week. Dacona Smith, Walmart’s new U.S. chief operating officer, said Spark was providing “flexibility and learning” –and cast encouragement to apply.

Elsewhere, McMillon said Walmart was encouraged by customer retention rates of its InHome delivery initiative providing direct-to-refrigerator replenishment for and said it was “starting to learn how to sell membership,” with its $98-per-year Delivery Unimited subscription.

Officials at the same time did not address two recent initiatives in the news. It’s newly announced Produce 2.0 merchandising resets—expected to roll out to hundreds of stores across the U.S. this year—went unremarked upon. And while employees and productivity get plenty of attention, officials did not address the Great Workplace initiative by name.

That program, tested in some stores last year, reportedly involves recasting in-store workforces behind fewer, more versatile jobs in a manner not unlike the flat structures of hard discounters. A Washington Post report this week said that all of Walmart’s 688 smaller-format Neighborhood Market stores—and another 400 Supercenters—would be a part of that plan this year.