“Here’s something I found on the web,” she offered. “According to TheSpruce.com, the Clorox Toilet Wand is a fantastic and convenient tool to get a toilet clean.”

Had this conversation continued, my next question would have been “Why do you think I’m here, Alexa?!” but I know the answers to that one, too—there’s that big-picture philosophical one (I’m a parent) and an in-the-moment practical one (I’m checking out an Amazon Fresh store for the very first time and utilizing its voice-activated assistant kiosk near the dairy case to find an item we’ve run out of at home, because, as Alexa well knows, it’s a fantastic and convenient tool). Also, I’m a retail reporter IRL who’s going to write about this.

Toilet Wand refills were one of things we realized we needed as we pulled in for an impromptu drop-in at the brand-new Amazon Fresh grocery store in Warrington, Pa., last weekend. We really hadn’t come to shop—my mother-in-law happens to live nearby and we were in town for a Sunday visit. The store, which opened Aug. 5, is just the 18th of what observers anticipate will be hundreds of physical grocery stores from the innovative Seattle tech giant, and its first in the state of Pennsylvania.

My ironic missed connection with Alexa—after an initial mishearing I’ll to attribute to having been safely masked-up when I asked, its AI appeared to understand what I was seeking but not how to find it—was one of two instances where leading-edge tech in the store unfortunately came up short for me. I fully intended to give its product-recognizing-and-auto-paying Dash Cart a test drive (this store does not include the “walk-out” Go technology). With the help of an on-site employee, I was able to align the Dash Cart and my Amazon shopping app fairly quickly—only to have the app inform me it couldn’t verify the credit card I had stored with it. Rather than address that in the entranceway of the store, I grabbed an analog cart instead and promised I’d try Dash another time. 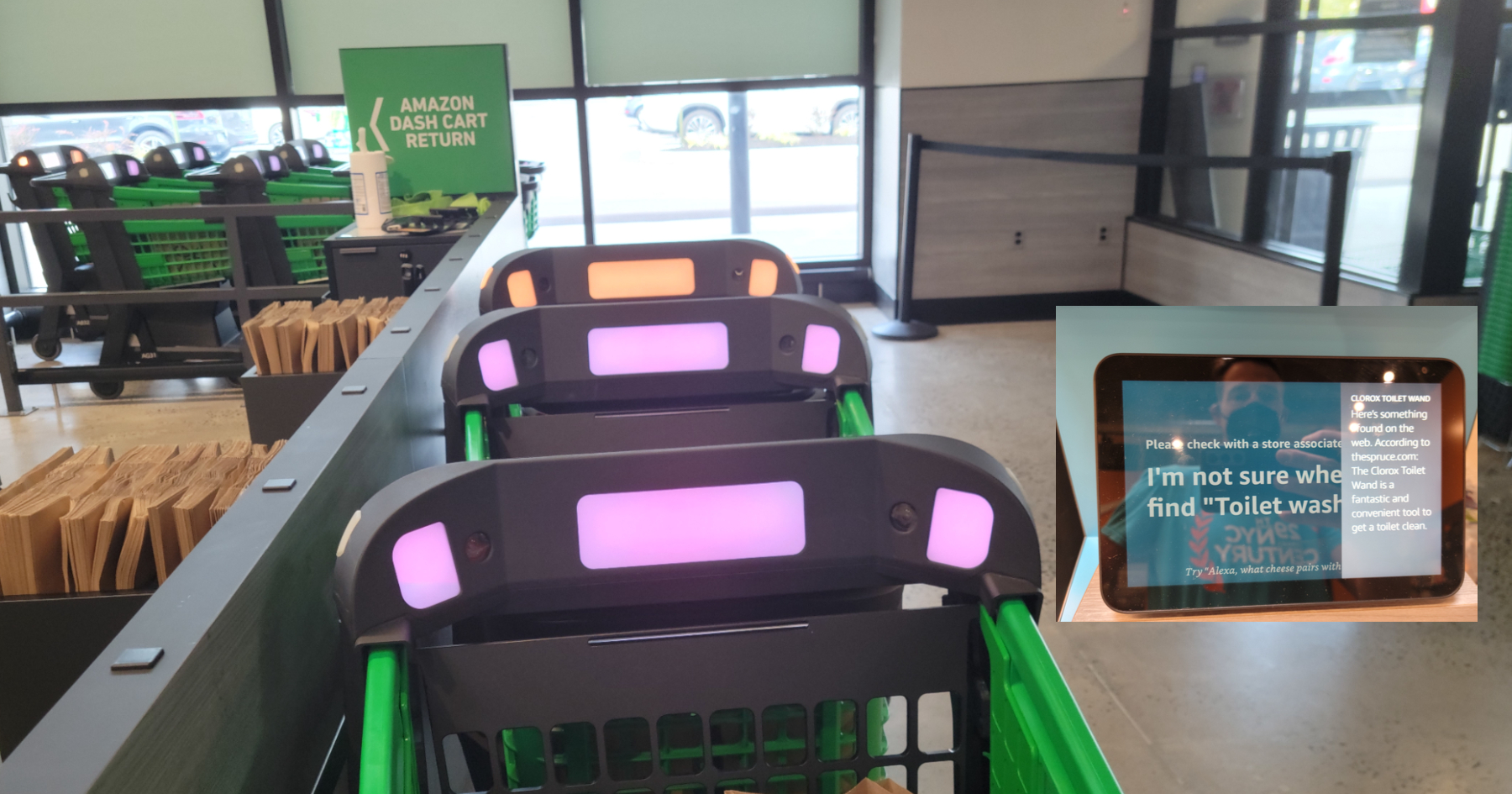 Dash was ready for me, but I wasn't ready for it, apparently. Inset: A screenshot reflects a communication gap with Alexa.

It was odd in that I’m in the regular habit of ordering stuff for home with a simple swipe from the app and that had never happened—and I would successfully use the very same card in an old-school physical checkout.

But there it was—not one but two interactions that work beautifully and conveniently in the virtual world struggling to come to life in the real one. To be fair to Alexa, she was courteous, fast and accurate in helping me find charcoal in aisle 18.

So some questions were answered; others weren’t; and still more popped up as I explored the 33,000-square-foot grocery store for the first time.

Here’s one: How do I describe this store’s pricing strategy?

I suppose “modified EDLP” would be closest; there were some featured deals on branded goods (Ben & Jerry’s 16-oz. ice cream at $3.89)  and fresh stuff (99-cent-per-pound grapes) but it would seem the overall impression it made traveled further behind what it called its everyday prices, with placement in a paper flyer and signage in the stores just as prominent if not more so: The giant sign in the shape of a bright yellow banana dangled above its 15-cents-each bananas. Boneless, skinless chicken thighs made the front page at $2.19 per pound, every day.

Brick Meets Click founder Bill Bishop, with whom I spoke recently, had raised the same issue based on his research, suggesting that this, too, reflected Amazon’s online background melding into omnichannel. Some items they investigated were priced so as to move individually, as an online retailer might; the same item in a store sliding into a larger macro pricing strategy designed around a basket. From a shopper’s point of view, I’d say Amazon Fresh makes an impression as “competitively priced” overall based on the featured items and a large number of private labels where value was obvious vs. brands (Happy Belly Greek-style yogurt tubs at $1.84 alongside Stonyfield’s organic counterpart priced at $6.34, to give one example).

At the same time, I couldn’t pull the trigger on the charcoal in aisle 18 priced at $12.25 for a 16-pound bag. I guess that’s fair as grocery-store prices go, but the pack size wasn’t right for the volume of outdoor cooking we like, and I know I can get a bundled pair of 20-pounders at Home Depot for only a few bucks more, so decided it was best if we wait.

This also highlights that Amazon Fresh isn’t necessarily an “everything store” like its parent. Bishop estimates the store carries about 16,000 SKUs, or roughly half of a full-shop grocery counterpart, with brand and size variety considerably trimmed. It seemed a lot of these items were under various Amazon private labels such as Aplenty and Happy Belly—though new names to many shoppers, these look like totally legitimate brands in and of themselves and would appear to represent something of a strength vs. conventional competitors: house brands as old as the house itself.

The store’s layout and merchandising seemed logical and attractive: Produce was prominent and roomy if not overwhelming—with a Wegmans about a mile up Rte. 611, Amazon Fresh won’t be the best here, so “good enough” is probably good enough. The deli and prepared foods were much better-presented and stocked than I would have guessed they might be and had drawn a crowd ordering good-looking pizza slices and affordable to-go sandwiches. There was seating inside and out for eating—the “out” had no shade and a view of a busy parking lot and was understandably empty.

On the opposite corner of the store resided a relatively small and lonelier combo service seafood and meat counter. This was considerably less impressive than most mainstream supermarket competitors—or Amazon’s sister Whole Foods Market, despite a few attractive thick-cut steaks on one tray. 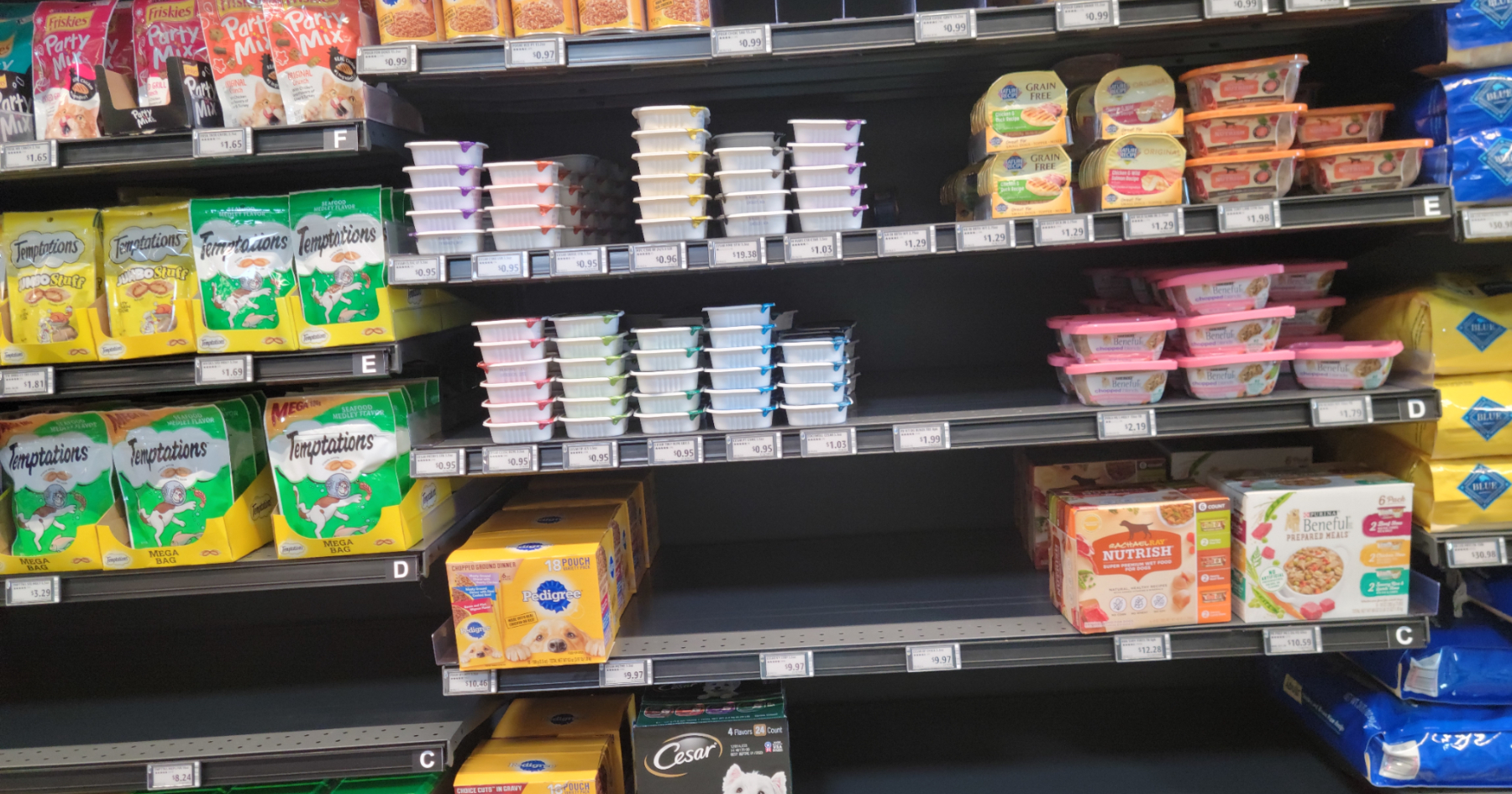 The aisles were divided down the center, helping traffic flow and creating lots of endcap space. In grocery, I spotted lots of darkness on the shelves, particularly in pet food, which I’d assume was more of a supply-chain issue than an Amazon Fresh issue. Big windows up front let in a lot of light in front of 10 checkout stands and the Dash Cart lane. Sunday afternoon store traffic seemed healthy: I saw several moms with young kids—always a signal of a grocery store’s health—and some older guys pushing Dash carts. There’s probably a lesson there.

A side parking field faces a wide-doored employee entrance—really an employee exit—a short walk to 10 dedicated parking spots for customer curbside pickup (and another 10 spots reserved for Flex delivery drivers facing them). Here we encountered a Flex driver concentrating hard as he worked the contents of two rolling racks—easily three dozen or more separate brown grocery bags—into an SUV in the hot sun. He was to unload these at eight different home locations, he said, so Tetris-packing the vehicle was essential for efficient drop-off—not to mention, I thought, for visibility once he hits the road. 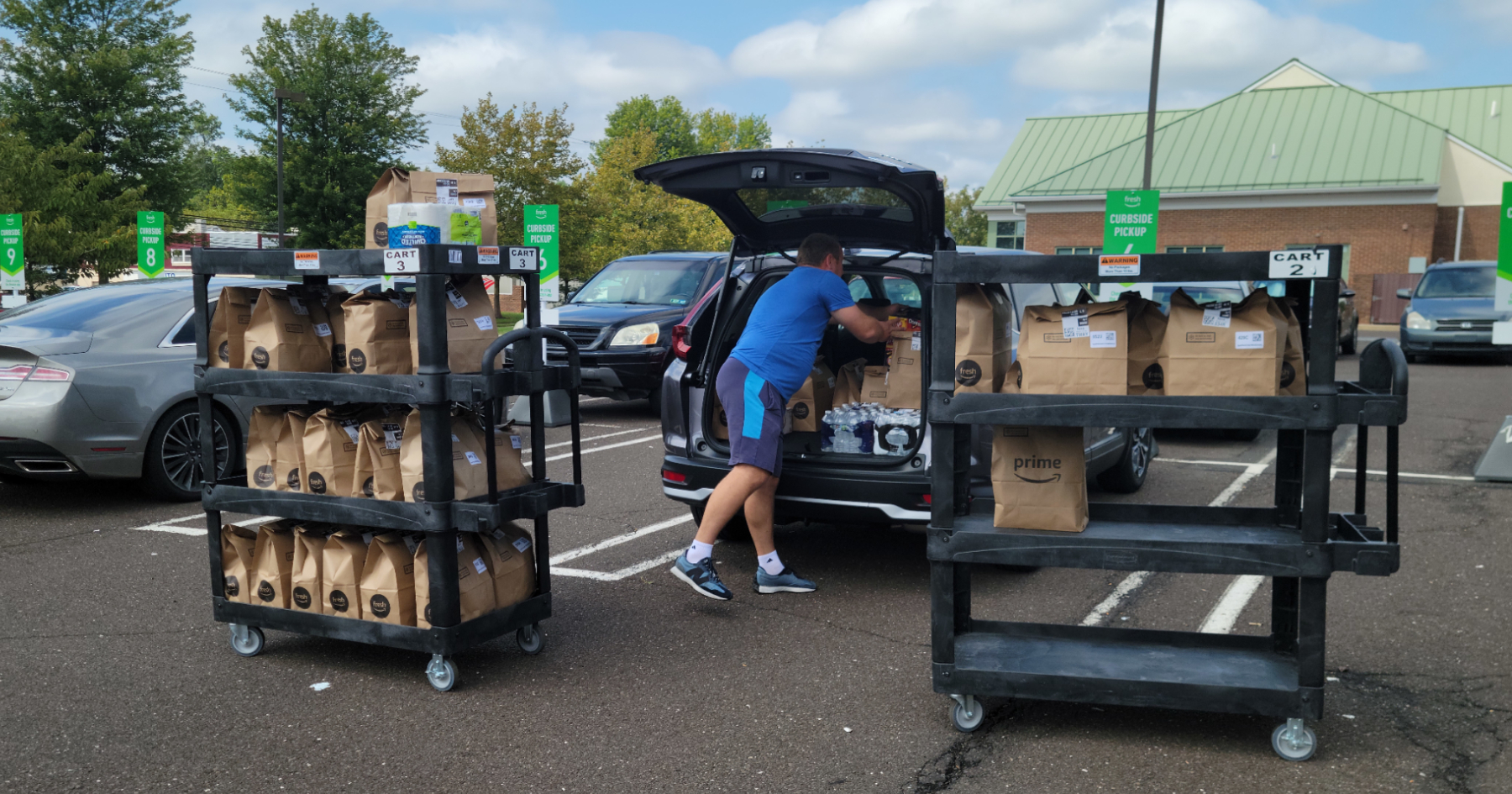 A Flex driver plays "SUV Tetris": finding the right space and room in his vehicle for space for eight separate grocery deliveries.

Before we left the store, we finally located the cleaning-products aisle, but Toilet-Wand refills remained elusive. We got a package this week from our local Food Bazaar store, no questions asked. We circled by the neighboring Home Depot for charcoal—where 40 pounds were on sale for $16.88. (Ironically enough, the last time I was at Home Depot to replenish my charcoal, I whipped out my Amazon app right there in the BBQ aisle to order cedar planks for home delivery, where the everything store had a much superior price/quantity combo and a calming effect on the sticker shock accompanying the realization that something I'm buying specifically to set fire to needs to be priced as competitively as possible).

As other first impressions go? Amazon Fresh is a fantastic and convenient tool—but it doesn’t have all the answers.