The Kroger Co. held grand opening ceremonies last week for a new store in Atlanta that more that doubles the size of the unit it replaced while acknowledging the multiethnic makeup of its local shopper base in assortment and decor.

The new unit in Embry Village, in DeKalb County, was built at a site adjacent to an 18-year-old, 56,000-square-foot store that was demolished a year ago. The larger store incorporates more service departments, expanded assortments of natural and organic foods, prepared food items and home goods than its predecessor, officials said.

A release from the company’s Atlanta division said the 114,000-square-foot store represented a $25 million investment. It opened Aug. 12. And though roughly the size of the company’s multidepartment Marketplace stores, including some in the Atlanta market, the store does not include the apparel and jewelry assortments typical of those units, and so goes by the Kroger banner, a spokeswoman said.

“Kroger is committed to providing a unique shopping experience for our customers that represents the dynamics of the community,” said Felix Turner, manager of corporate affairs for Kroger’s Atlanta division. “We are also committed to the communities we serve and are excited to donate $500 gift cards to each of our partner schools: Henderson Mill Elementary, Henderson Middle School and Chamblee Charter High School.”

Artisanal decor at the new store features a mural by the world-renowned graffiti artist known as “Mr. Totem,” who grew up and lives in nearby Chamblee, Ga., part of the Buford Highway Corridor known as greater Atlanta’s most diverse community. 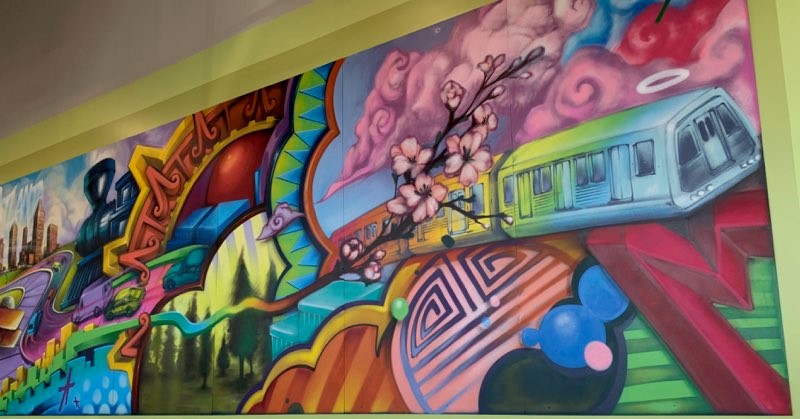 A mural by the noted graffitti artist "Mr. Totem" celebrates the ethnic diversity of the Buford Highway Corridor. Photograph courtesy of Kroger

The vibrant, colorful mural depicts the Buford Highway Corridor through a continuous sense of motion, “like the road itself,” Kroger said. “The diversity of people, cultures and transit is subtly showcased against the backdrop of the Atlanta skyline and neighborhood buildings. As a multiethnic native of Buford Highway, Mr. Totem has a firsthand understanding of the neighborhood and the immigrant reality. He wants to inspire and encourage others to understand and experience the real, unique essence of Buford Highway."

The store’s nearby competition includes a range of specialty ethnic stores, including Hispanic, Asian and Indian banners, as well as a Publix.