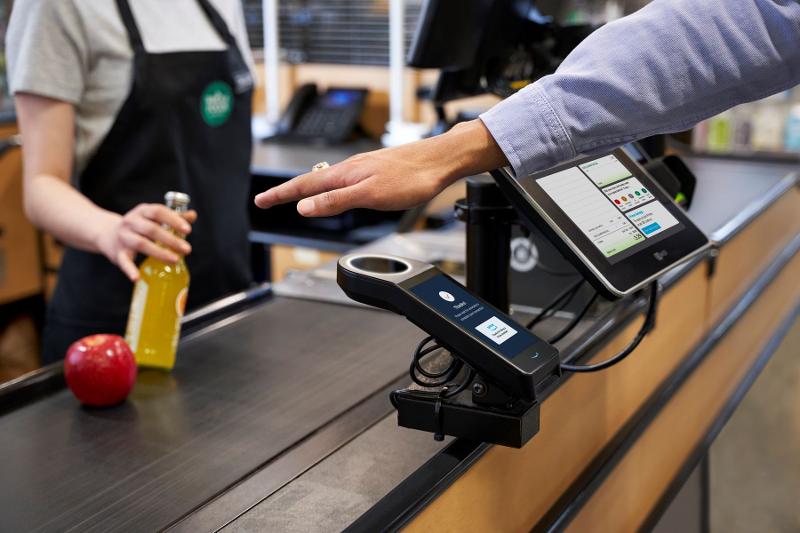 A customer uses Amazon One to pay at Whole Foods. / Photo courtesy: Amazon

Amazon’s palm payment technology is heading to 65 Whole Foods Markets in California, the company’s first broad roll out of the quick-pay feature at the grocery chain, the retailer announced Tuesday.

Amazon One debuted at two Seattle-area Amazon Go stores in September 2020 and launched at several Whole Foods locations in Seattle in April 2021. It’s currently in use in a number of arenas and airports, as well as multiple Whole Foods, Amazon Fresh and Amazon Go stores around the country.

Widespread rollout of the palm technology started Tuesday at California Whole Foods stores, the company said, with service spreading across the state in the coming weeks. In May, Amazon-owned Whole Foods added Amazon One at three locations in Los Angeles. It’s also available at an Amazon Style store in Glendale, California, as well as a Whole Foods market in Sherman Oaks, California, that uses the Just Walk Out technology seen at Amazon Fresh stores.

To use Amazon One, shoppers must first enroll their palm (or both palms) with the payment service and link the biometric data with their credit or debit card. Amazon said that process takes less than one minute. The scanning device uses “vision technology” to find and select unique identifiers on each customer’s palm, the company said.

“After they are done shopping, customers come to the checkout counter or point of sale, just hover their palm over the Amazon One device and the card linked to their palm will be charged for their purchase,” the company said in a statement.

Amazon has previously said that it selected palm recognition because it is more private than other types of biometric payment “because you can’t determine a person’s identity by looking at an image of their palm.” The retail giant debuted the technology during the pre-vaccine period of the pandemic, noting it believed shoppers would welcome a contactless option.

Users don’t need an Amazon account to use the payment platform.

The company said its Amazon One scanners are protected by “multiple security controls” and that palm images are encrypted and sent to a secure area in the cloud, not stored on the devices themselves.

In its brick-and-mortar stores, Amazon has long focused on contactless, quick-pay technologies. The retailer, which acquired Whole Foods in 2017 for more than $13 billion, recently opened its 40th Amazon Fresh market. The tech-enabled grocery stores allow customers to shop, pay and exit without going through a traditional checkout lane.