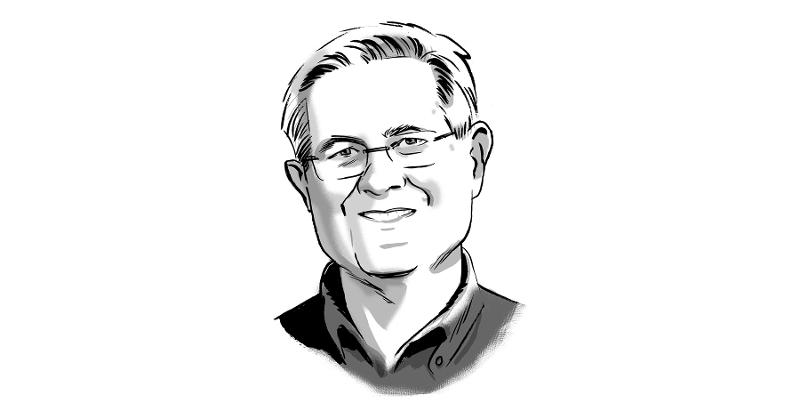 Jon Springer: Welcome to the Breakroom, John. Why set out to automate grocery storage and picking? Weren’t there easier applications to tackle first?

John Lert: In the mid-1990s, before there was even an internet, I became very interested in food retailing as an extremely complex business operating at massive scale on very low profit margins, and relatively underpenetrated by technology. The inventor in me started thinking about how to leverage technology to reimagine the supermarket, and I began envisioning a store in which the center store aisles are replaced by an automated order-picking technology that picks all packaged goods ordered by customers electronically, either in the store or remotely on a computer, and transmitted via modems over phone lines, since this was pre-internet. This automated center store would be combined with a checkout-free, self-service fresh market so that customers could choose either to self-select their own produce, meats, seafood, flowers, etc., or to order them online as well and let the retailer make those selections. Customers would also have the choice of either collecting their order at the store or having it delivered from the store to their homes.

I came to believe that if the automation problem could be solved, such a store could provide a quantum improvement in customer experience by eliminating most of the time and stress associated with food shopping while simultaneously providing retailers with a more efficient, effective and profitable operating model for their stores. In short, I saw an opportunity to shift the retail paradigm from self-service to automated service, and that vision sort of took over my life. I started inventing automation solutions, and by 2001, I was focusing on using mobile robots to create a goods-to-picker process. Meanwhile, along came the internet and Amazon, and now this idea of the automated supermarket has become the solution to the intractable problem of how food retailers can thrive in an age of e-commerce, even competing against Amazon.

Actually, I did end up tackling an easier problem first, which was automating the case-selection process in distribution centers. With funding from C&S Wholesale Grocers, I founded in 2007 a company now known as Symbotic to develop my invention of a robotic case-picking technology. I ended up selling my ownership interest to C&S, and in 2011, I resumed my quest to develop an each-picking technology capable of automating the supermarket. In 2014, I was lucky enough to start working with my co-inventor and co-founder, Bill Fosnight, and together we designed the Alphabot system.

How is your Alphabot system different than other forms of robotic pickers?

What makes the Alphabot unique in the world is its ability to transform itself from a mobile robot, operating in two horizontal dimensions, into a vertical lift; move itself and its payload to any storage or workstation elevation; and then resume horizontal operation at that new elevation. This capability will make Alphabot the most cost-effective, reliable and space-efficient goods-to-picker technology ever created.

That capability allows us to have a completely three-dimensional architecture for both storage and throughput. Not only do we store product and order totes floor to ceiling, we can also stack the pick stations vertically, and the robots can access any of those workstations. We have a storage level about every 15 inches and in a tier of workstations every eight feet.

The architecture gives us a great deal of scalability and flexibility in design and reliability because any one robot can fail, and all the rest of the robots can work around it. There’s no single point of failure. It’s very capital efficient because it’s only one moving part. Compared to shuttle systems, for example, our bots eliminate the need for all lifts, conveyors and tote-transfer mechanisms at the workstations. The elimination of all of these mechanisms will not only reduce the cost of the system but also will dramatically increase its reliability.

We get 100% duty cycle out of the robot because it doesn’t use chemical batteries, so it never has to go out of service to charge. It uses supercapacitors to store energy and those are charged every time the robot moves vertically.

Our technology also supports storage in all three temperature zones—ambient, chilled and frozen—and the same bots can operate across all of them. By the way, supercapacitors actually function better the colder the temperature, whereas chemical batteries lose storage capacity in chilled environments.

We also have the kind of flexibility with this architecture that the robots can leave the system and run on rails at elevation above working space on the store floor and even deliver the orders to customers’ cars in the parking lot.

Convincing Walmart to come aboard as your first test partner was a bold move. How’d that deal come about?

It was also a bold move for Walmart. I think that Walmart was the very first retailer to figure out that selling groceries online could only be profitable if the fulfillment of online orders is automated and executed at stores rather than in centralized fulfillment centers.

When we had our first meeting in February 2016, they had been searching unsuccessfully for a technology capable of doing that affordably. They immediately recognized that our Alphabot concept could be the solution they were seeking, and less than six months later, we closed a deal in which Walmart agreed to fund the development of Alphabot in exchange only for commercial rights, without taking any equity in Alert Innovation. It’s been a great partnership for both companies, and my incredibly talented team has succeeded in bringing Alphabot to market amazingly quickly.

Tell us about Novastore. How soon will we see one?

Alphabot will make possible for the first time a new kind of supermarket featuring automated service rather than self-service, which we call Novastore. In a Novastore, the entire center store is replaced with an Alphabot micro-fulfillment center which can pick ambient, chill and frozen grocery orders in minutes. The fresh market remains primarily self-service because most customers still prefer to pick their own produce, meats, seafood, flowers, etc. However, customers can shop these products, pay on their phone, and leave the store without any queuing for checkout, and customers will also have the option of ordering all their fresh goods remotely too. The Novastore format will solve the most challenging problem that self-service food retailers face today, which is how to move their businesses online profitably and at scale. As a result, we believe automated service will displace self-service to become the dominant paradigm in food retail.

As for timing, I think we will probably see the first Novastore sooner than most people think. The primary prerequisite that must be in place is a more mature Alphabot technology. Novastore is arguably the most difficult automation application ever attempted, and requires a very robust, reliable and low-cost automation solution. We are certain that Alphabot will meet the requirements once we have given it sufficient run time in more conventional each-picking applications. If I had to guess, I think it will be within three to four years, possibly sooner.

First, it’s important to recognize that there is enormous pent-up demand for ordering groceries online because of the potential time savings and convenience it offers. The primary reason online penetration in food retail has been so low is not for lack of potential demand, it’s because retailers have not yet found a way to sell groceries online profitably. The average U.S. household spends 60 hours per year shopping for groceries—more than any other type of product. Given that 20% of apparel is purchased online today, it seems highly likely that food e-commerce will eventually equal or exceed that number. At that level of penetration, existing food retailers simply have to fill online orders from their stores, rather than from “dark stores” or “sheds,” because otherwise the resulting cannibalization will kill their stores.

The simple truth, I think, is that there is still no good solution to the core problem available today. However, we want retailers to be aware that the Novastore solution is coming so they can factor it into their thinking. In making their decisions today, they must ask themselves how they will be able to compete with the automated-service format in the future—a question made all the more urgent if recent reports are correct that Amazon is working to develop their own version of Novastore.

What was your first invention?

Home run for calling balls and strikes today, because the machines will be more accurate than the humans, and the game will be better for players and fans as a result.

What do you tool around in? Something self-driving?

Yes, a Tesla Model S, though I enjoy driving the car so much that I use the autopilot feature only rarely.

Who serves the best clam chowder in Boston?