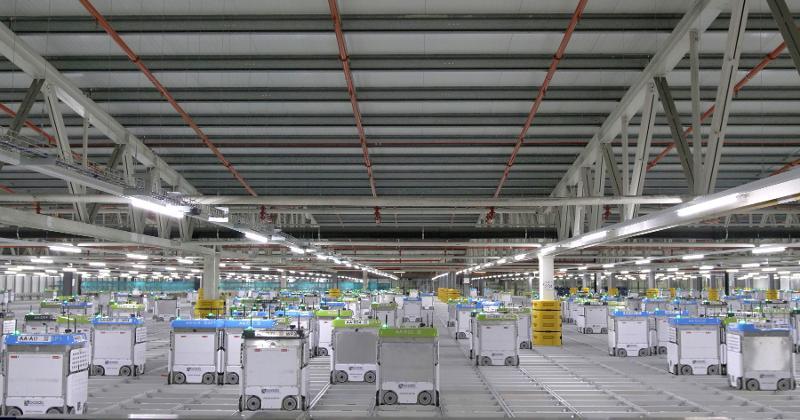 The July 17 incident was the second fire affecting a facility for Ocado, a pioneer in automated grocery e-commerce warehouses. A separate facility in Andover, U.K., burned to the ground in 2019 due to what was determined to have been an electrical fire from a charging unit, and subsequent issues containing the blaze, according to reports.

The company in a statement last week emphasized the Erith incident was relatively minor and was quickly and safely contained, although it is expected to trigger disruption to Ocado’s orders for about a week.

“The incident at our Erith CFC … appears to have been caused by the collision of three bots on the grid resulting in a fire. The correct protocols were successfully implemented, including the evacuation of the building, the activation of the sprinkler system and the presence of the London Fire Brigade. No one has been injured and all colleagues on-site are safe. The damage is limited to a small section of less than 1% of the grid having been contained by planned fire attenuation measures,” the statement read.

“Aside from some residual smoke smell, the vast majority of the CFC is in good condition. While we expect some disruption to operations, we are working to restore normal service as soon as possible. We expect the facility to begin operating within the coming week and thank customers whose orders are affected for their patience.”

Ocado is in the process of rebuilding its facility at Andover, which originally opened in 2016 and burned in February 2019. The 215,000-square-foot unit will service Ocado Retail, a joint venture between Ocado and U.K. retailer Marks & Spencer.

Ocado officials have described its facilities as the “largest grocery stores in the world.” The Erith fulfillment center measures 583,000 square feet and uses an army of robots traveling aboard a grid storage system capable of assembling a 50-item grocery order in about 15 minutes.

Ocado’s first U.S. grocery facilities have opened this year in Monroe, Ohio, and Groveland, Fla., in a partnership between Ocado Services and The Kroger Co.