Eight years after removing self-checkouts in order to focus on customer service, Albertsons Cos. in June reversed course and introduced a new suite of automated checkouts to stores across nine banners to speed service and provide customers with options.

Albertsons now hopes it can accomplish those goals simultaneously.

“We’re empowering our customers to pick the way they want to check out, and having more self-checkouts is part of that,” says Rucha Nanavati, group VP of information technology, retail, merchandising and supply chain for the Boise, Idaho-based retailer. “This is about providing more options for customers and making it as frictionless as possible, with less intervention, because lots of people don’t want to chat to employees.”

At the same time, Albertsons is piloting mobile checkout in one store, which allows employees to wander the aisles and check out customers with smaller baskets on demand. “Customers have different needs and this allows them to have options,” Nanavati says. “Nobody enjoys the checkout experience, so now they can enjoy the shopping experience.” 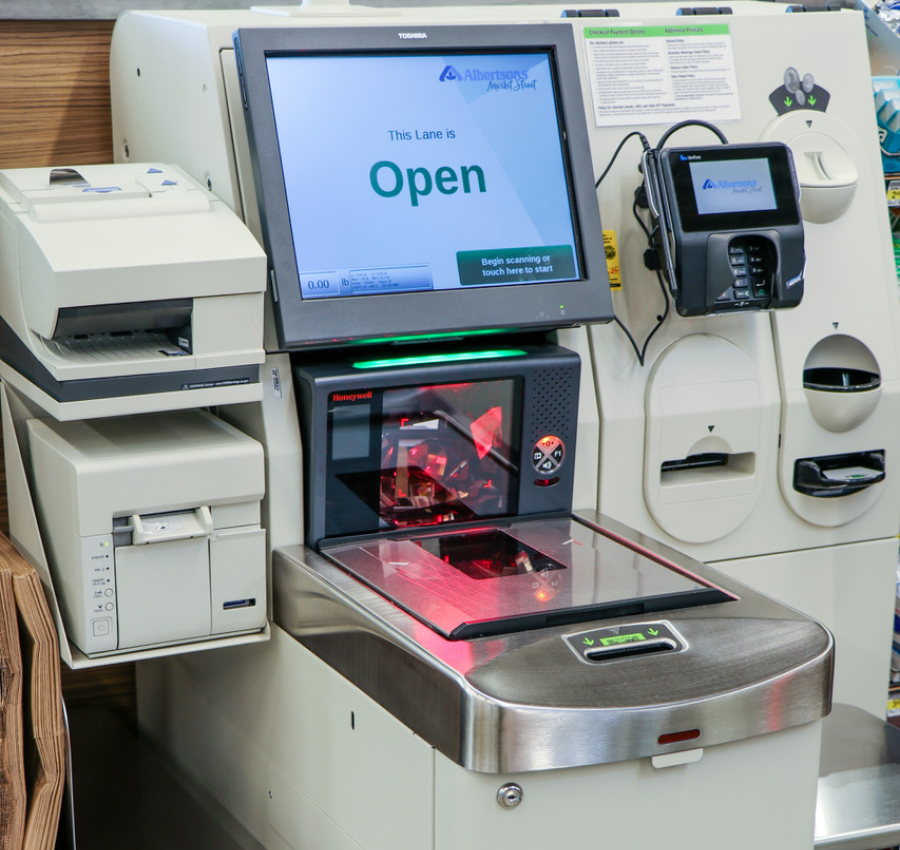 Albertsons is not removing any traditional clerk-manned checkouts; these new options are additional, and will be implemented across its flagship banner, as well as Jewel, Acme, Shaw’s, Safeway, Carrs, Tom Thumb, Randalls and Vons, mostly in more densely populated urban areas where the need for speed is the greatest.

The retailer’s new checkouts are from Toshiba and will be upgraded later this year to a newer model that will apply “machine learning and intelligence to the checkout process across our 2,200-plus stores,” says Anuj Dhanda, EVP and chief information officer of Albertsons.

Among the primary customer concerns Albertsons is hoping to alleviate with its new self-checkout technology is the familiar scenario that requires an employee to be called every time a kink occurs. The new system from Toshiba allows them to do it all through a mobile device, which takes less time. “They can clear things out without interrupting the checkout process,” Nanavati says.

It’s not just Albertsons that’s giving self-checkouts a whirl. Issaquah, Wash.-based Costco is adding them back into about 125 stores six years after eliminating them. During the company’s third-quarter conference call, EVP and Chief Financial Officer Richard Galanti said “it works best in high-volume locations where it’s got a lot easier, particularly if you have a credit card.” Galanti said it gets customers through the checkout process faster and saves labor at the front end.

The Kroger Co.’s Matthews, N.C.-based Harris Teeter subsidiary has completely eliminated its traditional checkout lanes and is transitioning to self-checkout at one of its smaller stores in Charlotte, N.C. The goal is speed, and thus better customer service, says spokesperson Danna Robinson. Then there’s Rochester, N.Y-based Wegmans Food Markets, which recently rolled out SCAN, a free mobile app that allows shoppers to scan their groceries while shopping and then pay via self-checkout. The retailer launched SCAN in May and will add it to other stores if it’s deemed successful. Similar technology has also been rolled out to 23 Meijer stores in and around Chicago.

Kroger’s Scan, Bag, Go option allows customers to scan items as they shop and then, using a checkout station at the end, scan their phones to pay digitally. And in February, the Cincinnati-based retailer launched Kroger Pay, through which customers pay at either the traditional checkout line or the self-checkout counter via a single-use QR code that allows them to pay using debit, credit or a prepaid card.

And no discussion of self checkout is complete without a mention of Amazon Go stores, where customers check in using a mobile app before they start shopping and then just walk out when they’re done. They are charged automatically for their purchases upon walking out.

While self-checkout has had its hiccups over the years, it’s here to stay. Self-checkout is the supermarket technology most consumers are interested in, with 42% showing desire for it, according to the Regional Grocery: New Digital Pathways to Convenience, Value and Margin Growth report released in February from Toronto-based Mercatus. This was double the interest of the second most desired technology—comparing prices via mobile devices at 21%.

According to Perry Kramer, SVP and practice lead of Boston Retail Partners (BRP), “self-checkout is going to evolve, and there will be some back and forth with this.”

Kramer, who has helped with the design of self-checkout systems, anticipates a concurrent growth of self-checkouts, mobile scan-and-go technology and other new technologies. He anticipates that mobile checkout will grow, and BRP’s latest POS/Customer Engagement Benchmarking Survey reveals that two-thirds of all North American retailers anticipate launching a mobile payment option within three years.

A recent BRP survey shows that 14% of stores allow customers to scan and pay with their phones, while 39% of stores plan to offer the option in the next two years. Kramer thinks the technology will do well because 69% of consumers use their phones at some point during their shopping experience, whether it’s for tasks such as price comparison or finding things in the store.

Kramer believes a key to continued consumer adoption is leveraging an integrated payment process that combines the use of a mobile app with stored payment tokens so consumers can use their phones to pay at self-checkout units.

As for the downsides often associated with self-checkouts—shrink and theft—Kramer is skeptical. He believes consumers are much more likely to steal something at the back of the store than at the checkouts, where many stores have closed-circuit TV cameras.

What makes this more difficult is that the largest part of the theft is unintentional, says Neil Stern, senior partner of McMillanDoolittle in Chicago. “People think they’ve scanned an item but they haven’t … and if everyone misses one item in their cart, it’s massive,” he says. “There will be retailers who can live with larger shrink if they get some offset on labor.”

That said, the costs of implementation for self-checkout can be high. Compared to a traditional checkout line, which typically costs $3,000 to $4,000, self-checkout can run $12,000 to  $30,000—on the higher end if it takes cash, which requires a lot more moving parts.

“So if stores aren’t getting the real return and the consumer’s not using them much or often, they frequently take them out,” says Kramer, adding that all those moving parts also lead to high maintenance costs.

Another downside of self-checkout—reducing the chance for a meaningful interaction with a store employee—is the reason Seattle-based PCC Community Markets removed them at the beginning of 2019.

Reducing labor, however, is considered an advantage for most retailers, as labor costs have increased significantly in the past few years, says Kramer, who anticipates smart stores will reallocate labor—at least some of it—back onto the shop floor to provide interaction with customers.

BRP’s research shows that 79% of consumers like personalized service when they’re shopping. “So you usually see an increase in sales,” says Kramer, though he acknowledges that this requires another level of employee training—teaching employees to understand when to engage with customers who are actively shopping and when to leave them alone. “Interactions in the aisle are much more meaningful and can really add to the basket, which doesn’t happen at the checkout.

Stern disagrees. He thinks supermarkets will cut labor, and over time, customers “just get trained that self-service means more control for them.”

He also expects to see a constant “evolution and revolution” of self-checkout. “It’s about trying different things and how fast technology can evolve,” he says, adding that Amazon Go is already leading the pack. The question, he asks, is whether Amazon’s technology is scalable to a grocery store environment where there are more items without barcodes, such as deli meat or produce.

But before self-checkout can become widespread, the technology has to improve, Stern says. He envisions the day when an entire cart can be scanned, without items being removed. An X-ray-type machine Kroger was testing had a 98% success rate, Stern says.

“The problem is that 2%. You can’t have that error rate,” he says, noting that the errors come from the tricky-to-scan items such as a crinkly bag of potato chips or a damp product. “Amazon Go can manipulate 100% accuracy by having small stores with smaller SKUs, so the technology needs to evolve to grocery store scale—and that’s the evolution we’re waiting on.”