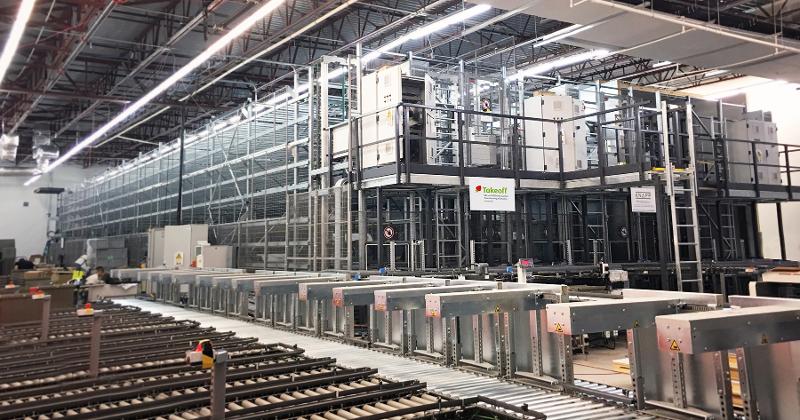 The coronavirus pandemic may well prove to be the fuel that launches microfulfillment into the stratosphere. While its proponents have long made an economic argument for outsourcing online grocery picking to store-based robots, the social distancing concerns accompanying virus mitigation efforts have sparked demand from consumers into high gear.

In a conversation with WGB, Curt Avallone, chief business officer of Waltham, Mass.-based Takeoff Technologies, reveals that its existing microfulfillment centers (MFCs) are up 80% to 120% during the crisis, sparking repeat purchases among retail partners anxious to find ways to quickly and efficiently meet online demand. Other impacts of the crisis, from effects of the restaurant shutdown to retail sku rationalization, also bode well for automated e-commerce close to the consumer, Avallone says.

The following conversation was excerpted from a phone interview April 27.

Jon Springer: How has the coronavirus crisis changed the outlook for Takeoff? It would seem that this is an ideal opportunity for a company like yours.

Curt Avallone: I think most of our retail partners are accelerating. They know there’s going to be a new normal, and [it's] highly likely that online grocery is going to continue to grow faster than anticipated as a result of the pandemic. So there’s been a lot of interest. I think the only mitigating factor is, obviously, grocers are very busy just with their day-to-day business, in between trying to get the shelf stocked and thinking about what they have to do strategically. But we seem to be in a good place.

Can you remind me of how many sites you have now?
We’ve got six open and 20 under construction. The back half of the year will be very big for us. There are well over 100 sites under contract at this point. So business continues to grow in a positive direction for us.

Does this crisis change anything else change for you? What I’m hearing is that the demand for e-commerce today is what might might’ve been anticipated in 2024 or 2025. So does that put pressure on you?

I think we’re in a good place as far as capacity and staffing and preparation for what we have in front of us. If you think about the players that are building the microfulfillment centers, we’re probably the ones with the most experience. So we’re feeling the pressure, but nothing that we aren’t going to be able to handle. 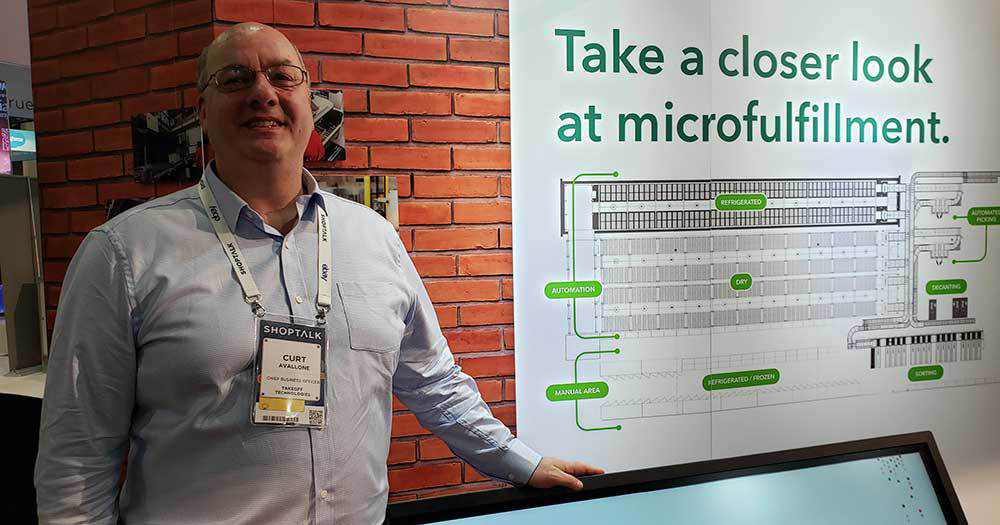 So of those that are open, the demand must be putting them to the test, right?

We’re not sharing anything confidential about any individual partners, but it’s safe to say we’re up 80% to 120% in our locations. So as a result of that, all the major [retail] players that you can probably guess are reordering, knowing that they now need to build additional facilities to keep up with the demand and what we all think is going to be the new normal.

Would we see something of a regional strategy where they would they have one MFC for eight or 10 stores? Or 12 or 20?

I think it can be anywhere from [one in] five to [one in] 20—depending upon what the volume of the individual stores that are being supported, and how many customers continue to use online after the pandemic.

It’s safe to say, prior to the pandemic, demand was about 5% of the population. Clearly now it’s in the double digits. And I think there’s anticipation that even after the crisis is over, there will still be a lot of customers who will look at the shopping experience differently, based upon everything they’re dealing with as well as continuing concern about a second wave, so it will probably remain in double digits. So to your point, we’ve picked up four or five years in the acceleration of the demand curve.

Takeoff recently commissioned a white paper assessing the opportunity for incumbent food retailers in the online grocery battle. What would you point out to be some of the top takeaways?

I always felt if microfulfillment came along a decade ago, and all the tools were there, the grocery industry would have weathered this crisis in a very different fashion. If there was one MFC for every 10 stores, we would have seen an industry response that would have probably been different, because they could have shifted a lot of volume and done a lot of things differently than what they’re dealing with today.

So I think we’d be able to look back and go, it’s a brave new world, we need to be able to fulfill online orders, but perhaps our sales floors are no longer a great place due to a combination of social distancing and in-stock position. As opposed to saying, I have facilities that are designed to do this and can ramp up and add a third shift overnight if needed, and keep up with demand. And if I don't have certain items, customers can see that online faster than they can walking into the store and make adjustments.

We also think we’re probably one of the few players that talks about that cross-channel opportunity. We’re a big advocate that grocers going forward are going to realize a combination of convenience, whether the pandemic had happened or not. But now even more so, keeping customers spread out. We’ll see grocers partner with c-stores and drugstores and quick-service restaurants, with automated lockers where the online orders will be there for customers to pick up, or to have a crowdsourcing company like Uber pick them up, and then the customer can get their Big Macs delivered, along with their Stop & Shop groceries.

We have several partners across channels that are already talking closely to one another. And as we’ve all seen on the news, the restaurants are starting to see that selling groceries is a positive thing. And I think that’s going to be part of a new norm for everybody, to realize that there’s a new convenience as well as safety opportunity if the channels start to cooperate in a meaningful fashion.

I believe Albertsons' CEO said over the winter that the MFC was four times more efficient than picking in-stores.

Normally, a 50-item order takes about 60 minutes to shop on the sales floor. And we can do that same order in six to seven minutes. There’s 10 times productivity with the automation, so it’s a tremendous opportunity to fulfill orders faster and more accurately than what customers are experiencing today.

The Takeoff centers aren’t any more protected from the stock-out issues that have affected stores though. How do you deal with that?

It’s up to each individual retailer to make choices. During the pandemic, most of them have looked at their assortment. A lot of grocers know that about 6,000 items is 80% of what they sell. And those are the items that generally do a better job of staying in stock with a variety of reasons, but they will tailor their assortment in a pandemic.

Again, normally the grocers who are more sophisticated in the space that move proactively are best suited vs. those that are having that choice made for them. But there are a variety of different ways in a crisis situation to give the customers the basics better through an environment that is transparent to them. We might not have all eight types of ketchup, but we certainly have one that’s available online. I think customers appreciate that, especially when they’re just trying to make sure they have staples for their children and their families.

What else are you seeing retailers learn?

Planning. They’re learning today about where they got hardest hit; a lot of that I think comes from an understanding of the restaurant behavior of their customers and not just their grocery behavior. In the metro markets, where restaurants might be doing 50% to 60% share of stomach and grocers 40% or high 30%, those are the areas where you need to be more aggressive with your planning and your online capabilities. I think the biggest lesson for most of the grocers is that some stores have been radically different from others, based upon what their customers were using to feed themselves.

Looking at the industry as a whole, how sticky do you think some of these changes are going to be? For example, assortments are going down in a lot of places. Is that a thing that's going to stick around afterward? And how, if at all, does that affect you?

We’ve always been neutral on that. We not only put 15,000 items through a microfulfillment center, but if it's attached to the store, we do what’s called top-off select from all 45,000 items. About 97% or 98% of your order comes out of the 15,000. So assortment is not so big an issue for us. I think in this scenario, it’s more likely that there will be SKU rationalization. That generally means they realize their stores are a little larger than they need, and they would be better off to put a microfulfillment center in.

I think one of the biggest benefits to those that have one of our facilities is that they realize very quickly they are in a better place, not just with the consumer, but from an inventory point of view, because that store had gobbled the inventory of the most important items: They’ve got them on the sales floor, and they’ve got them in the microfulfillment center.

A lot of our partners have been prioritizing inventory in the microfulfillment center,because of its ability to serve so many customers and because it’s safety conscious. In a scenario like this, it’s always better to use the facility, where your customers do not have to come and worry about social distancing in the aisle and your associates are not standing in front of them, potentially dealing with somebody who is sick. So a lot have realized the more volume they can move through the MFC, the better.

Is 15,000 items the right number of items? Have you considered going up?

We have options to go up. The key is keeping the footprint small enough to stay attached and use the real estate as efficiently as possible, because that’s what best for the last mile. But we can go beyond the 15,000 and we actually have several of our retailers building facilities that are a little bigger to carry more SKUs.