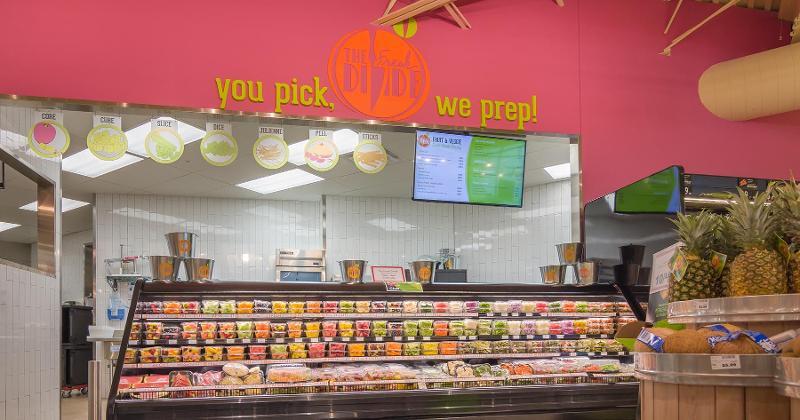 SpartanNash, whose owned retail stores have bore the brunt of competitive incursions, deflation and price competition for years, quietly reached a milestone in the fiscal third quarter by posting positive same-store sales for the first time, at least since the merger of Spartan Stores and Nash Finch in 2014, company records show.

Though the gain was modest at 0.1%, Mark Shamber, chief financial officer of the Grand Rapids, Mich.-based distributor, believes the trend can be sustainable, noting it represented a sequential jump from 2% negative comps in the previous period.

“That 2% came from somewhere, right?” Shamber said in remarks at the recent Barclays Gaming, Lodging, Leisure, Restaurant & Food Retail Conference. “Our expectation is that we’ll be able to sustain the vast majority of it. … We’ve started to make some inroads that the strategy is resonating with the consumers, the message is getting out there, and we’re starting to change some of the ways they think about us to the good.”

SpartanNash owns about 160 retail stores in the Midwest, doing business under the Family Fare, D&W Fresh Market, VG’s Grocery, Dan’s Supermarket and Family Fresh Market banners in addition to wholesale distribution to independently owned stores and military bases. During the company’s third-quarter earnings call in mid-November, officials said retail comps in the current period were running about 20 to 30 basis points away from where they were at the end of the third quarter.

Until its most recent quarter, SpartanNash’s retail division has not reported positive same-store sales dating back to the merger of Spartan Stores and NashFinch five years ago.

Shamber indicated the $18.3 million relaunch of the Family Fare brand in western Michigan played a large role in the return to positivity. The rebrand initiative focused on local products and wellness in a fun atmosphere that highlights what’s new and fresh in the store. A total of 14 stores were completely remodeled, with an additional four that participated in some of the rebrand initiatives. “We’ve seen some mid to high single-digit improvements in the comps depending upon the stores and the geographies and how much did or didn’t go into the remodels,” Shamber said.

Another move that has paid off was the hiring of Lori Raya as chief merchandising and marketing officer earlier this year and Tom Swanson as SVP and GM for corporate retail last year. Both helped drive the success in the return to positive comps in retail, Shamber said.

One of the big changes was the implementation of Fresh Divide, a fresh cut fruit and vegetable program, which allows customers to select the items they want to be cut and take them to staff in-store to do the task for them. That allows the stores to take what traditionally was a $6 watermelon, for example, and get $2-$3 for a slice of watermelon that is cut in-store. The stores also can offer produce items precut, because of the SpartanNash’s acquisition of Caito several years ago and it’s fresh cut program.

Shamber also noted that Raya introduced the one-day sale, such as $5 Friday, where a variety of products are advertised for a certain dollar amount and are on sale only for one day.

Ideas like the one-day sales and new initiatives tied to the stores’ remodels “have blended together and really helped show noticeable improvements in the comps,” he said, according to a Sentieo transcript.

A slow down of competitive new store openings has helped ease the pricing “wars” that began in mid-2017 and were a result of new competitors, including discounters moving into retail markets. “We’re certainly not back to pricing levels that we were at before the summer of 2017, but we’ve certainly eased back to levels that are more reasonable than 99-cent gallons of milk and 37 cents a pound for bananas,” Shamber noted.

On the distribution side, SpartanNash has been successful in attracting new customers, Shamber said. “In light of the merger that happened last year with Supervalu and UNFI, a lot of customers … took it as an opportunity to reevaluate where they are and who is serving them and just get an understanding of what else is out there,” he said. “Food distribution, in general, it’s a long sales cycle. It’s not an easy decision that somebody just jumps overnight, and it’s not usually done solely on price. We might get a new customer next year that we’ve been talking to us for 18 months. … We think we’re skewing toward gaining business vs. losing business as we finish out the year and look to 2020.”

However, food distribution has not been without its setbacks, most notably the implementation of e-logs, which affected driver availability. Even though SpartanNash operates the majority of its distribution through its own fleet and own drivers, it has had to rely on some third-party companies, which ended up being affected more significantly by the transition to e-logs.  Shamber also noted that while the Caito acquisition was positive, that segment of the business has been affected by the recent spate of produce recalls. While the Caito facility has never had a positive test, any recall has implications across the marketplace.

SpartanNash also is rebounding from its decision to purchase, and now divest, The Fresh Kitchen manufacturing facility. “We’re moving down a path where we expect the business to shut down this quarter, and we would expect that in the first half of fiscal 2020 that we would have a successful transaction in that area,” Shamber said.