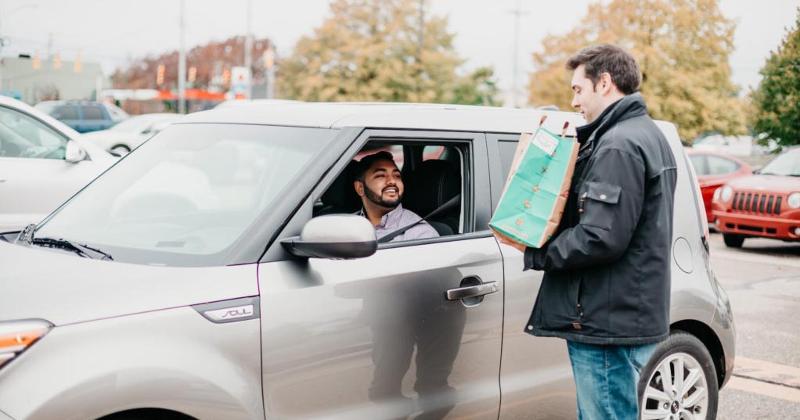 “I think we've taken a big turn here, and I want to make sure that everybody understands that the turn is comprehensive,” Dennis Eidson, chairman and interim president and CEO, said during an earnings call with analysts, according to a Sentieo transcript. “It's not just one little slice of the pie. And I think the team here has worked incredibly hard in the back half of the year, and I’m proud of what they've accomplished.”

Eidson returned to his role as CEO after Dave Staples resigned from the post in August; the search for a new CEO is progressing. He credited several personnel moves, including the recent naming of David Sisk as president of the military division, and the full integration of acquired supermarket chain Martin’s for the positive results.

Consolidated net sales increased 5.3% to $2 billion for the fourth quarter, while net sales for the year increased by almost 6% to $8.5 billion.

“We not only met our goal of sustaining mid-single-digit sales growth for another quarter, but we continued our momentum at retail by closing the year with positive comp store sales for the second consecutive quarter,” Eidson said.

He further noted that the company had achieved its goal of reducing capital by $30 million. “As evidenced in the fourth quarter, a significant component of our working capital improvements resulted from better inventory management. Our transportation team is in the process of implementing new route management tools to reduce miles traveled, which includes the installation of new onboard computers on all trucks to improve route planning, efficiency and service levels. We're encouraged by these new programs that will enable us to better leverage our fleet across the distribution network. … In the retail segment, sales growth was driven by contributions from the newly acquired Martin’s business and the second consecutive quarter of positive comp store sales. We continue to gain valuable insights from our partnership with Dunnhumby, which will strengthen our assortment, positioning and loyalty programs to deliver better experiences for our customers as we meet their shopping needs and fuel future growth.”

Mark Shamber, EVP and chief financial officer, noted that after acquiring Martin’s, sales fell less than 1% from expectations. “We guided a little conservatively when we took the business on because you do worry about a loss of some volume when an acquisition and customers maybe go elsewhere. But I would say is that from a top line standpoint, we were able to maintain or retain the vast amount of the sales volume there. So we were pleased on that,” he said.

Eidson also credited some of the two quarters of positive retail same-store sales to the progress of click-and-collect, noting that Michigan, where the bulk of stores are located, had positive comps for all of 2019.

Out of SpartanNash’s 156 stores, 68 have click-and-collect, and 82% of customers rate the service as a 5 on a scale of 1 to 5, he noted. “Incisive did a study of 80 retailers in North America and Europe, but we probably were one of the smallest. And we actually got ranked No. 5 across the U.S. and Europe in fulfillment in our click-and-collect model and actually No. 11 overall in maturities. So lots of good things going on there in that space, and we're hoping to make it even better as we move forward," he said.

Net sales in food distribution decreased 1.6% to $939 million in the fourth quarter. Excluding the elimination of intercompany sales to Martin's post acquisition, net sales increased 2.5%, primarily due to sales growth from existing customers.

Retail net sales increased 27.7% to $548 million for the quarter, primarily due to the acquisition of Martin's. Same-store sales were positive at 0.5%, a sequential increase of 40 basis points.

Military net sales of $511 million in the fourth quarter reflect a decrease of about 0.5% compared to prior year sales of $513.3 million. The decrease was due to lower comparable sales at Defense Commissary Agency (DeCa)-operated locations, partially offset by the continued expansion of DeCA's private brand program.

For fiscal 2020, which will be 53 weeks, SpartanNash expects the continuation of positive retail comp sales ranging from 0.1% to 0.7% for the fiscal year.

Within the military business, the decline in the DeCA comparable sales trend is expected to continue, which will be partially offset by growth in private brands, resulting in a mid-single-digit percentage decline on a 52-week basis.

The company said profitability is expected to increase over the prior year with fiscal 2020 adjusted earnings per share from continuing operations to range from $1.12 to $1.20 per diluted share compared to $1.10 in 2019, excluding restructuring charges, merger/acquisition and integration expenses and other adjusted items.

Fiscal 2020 adjusted EBITDA (earnings before interest, taxes, depreciation and amortization) is projected to be in the range of $180 million to $190 million compared to 2019's adjusted EBITDA of $177.9 million, consistent with the company's projected increase in operating earnings.