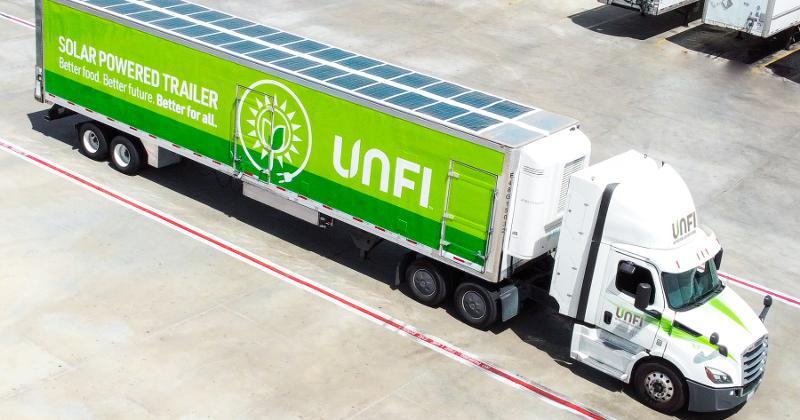 Despite absorbing multiple impacts of an industry compromised by supply-chain and workforce woes—including a COVID outbreak that temporarily forced the closure of one its own distribution centers—wholesaler United Natural Foods Inc. signaled on Tuesday that it sees opportunity in the chaos, and it delivered an optimistic outlook for its newly begun fiscal year.

The review of UNFI’s fourth-quarter and fiscal-year results and fiscal 2022 financial guidance also marked the first public comments from newly installed CEO Sandy Douglas, the former Staples executive who succeeded the retired Steve Spinner as the head of the Providence, R.I.-based wholesaler Aug. 9. Douglas remarked in a conference call that while he was still “learning the full extent of this business,” he stood behind his predecessor's prescribed “Fuel the Future” three-year strategic plan detailed earlier this year. Douglas also forecasted fiscal 2022 results trending toward that plan’s ambitious ranges, with sales, earnings per share and EBITDA figures all expected to grow by 4% in the year, which began Aug. 1.

These messages helped to send shares of UNFI soaring by more than 18% in early trading, blowing past 52-week highs to levels the company hadn’t seen since its consequential acquisition of conventional rival Supervalu in 2018.

“The supply chain is stressed right now, and it’s been stressed for 17 months. And that environment has been an opportunity for UNFI,” Chris Testa, UNFI’s president, said during a question-and-answer session with analysts, according to a Sentieo transcript. “We’re uniquely positioned because we have the full portfolio of conventional and natural. So if you think about some of those … conventional retailers that we were previously just selling natural, they can now come to UNFI and leverage our network to sell them conventional and take some relief on their captive distribution. What we’ve learned through the pandemic is when the supply chain [experiences] stress, that typically is a tailwind for us that creates opportunities for us.”

That said, UNFI is also in the crosshairs of its downsides from manufacturers and retailers. In August, the wholesaler’s distribution center in Centralia, Wash., was shut down for two days—and compromised for about a week overall—due to a delta-variant COVID outbreak that forced the company to deliver to its Northwest customers using alternative means and from greater distances. The financial impacts of that event will be reflected when the company released its first-quarter results, officials said.

“As the COVID pandemic lingers, our operating environment remains challenging,” Douglas said in opening remarks. “From our suppliers to UNFI to our customers, we are all facing challenges making, moving and delivering products through our interdependent supply chains.”

Added Testa: “Suppliers face many of the same challenges we see in our network, and the retailer community is growing fatigued with the limited assortments and increasing out-of-stocks across several key categories. These supply challenges caused our inbound supplier service levels to begin to deteriorate in the fourth quarter. To offset these challenges, we continue to proactively meet with our vendor partners to get our deserved share of supply and get in front of the upcoming holiday demand so we can provide the best possible experience for our customers.”

For the fiscal first quarter, UNFI said revenues of $6.7 billion dipped by 0.5% from the comparable period last year, but were up by 7.5% on a two-year stack normalizing last year’s COVID-aided gains.

The sales gains reflected benefits of cross-selling and inflation of about 2.4%, and were led by an 11.8% increase in sales to Whole Foods Market, UNFI’s largest customer. What UNFI calls the “supernatural” channel saw an 11.8% gain in the quarter to $1.1 billion, almost entirely offsetting year-over-year declining sales at chain retailers (down 6%) and independent stores (down 6.2%) in the quarter.

Cross-selling to Whole Foods—a result of a renegotiated contract with the Amazon-owned banner—and the chain’s own rebound from a slow comparable period last year as it absorbed the effects of changing consumer shopping patterns—helped to fuel the increased sales in the channel, Testa said.

UNFI’s owned retail banners, Cub Foods and Shoppers Food, had “another solid quarter,” Testa said, with a 6% decline in sales largely the result of cycling last year’s 21% year-over-year increase for a 15.2% two-year stack he said compared favorably with many of their peers. “Through efforts like an enhanced e-commerce platform, expanded delivery offerings and improved data analytics and merchandising concepts, we are striving to make our stores more appealing and easier to shop,” Testa said.

Quarterly net income of $43 million was down by 18.9%, but EBITDA of $201 million was well ahead of Wall Street estimates. Sales fell slightly short of a a $6.85 billion consensus estimate.

Still more encouraging for investors was fiscal-year guidance, which in addition to the 4% mid-point growth expectations in sales, earnings per share and EBITDA. The outlook includes a planned $300 million in capital expenditures. The company was bullish on expectations that cross-selling opportunities and new business—such as the Key Food Stores Cooperative it is about to begin serving for the first time—will join with price inflation together overcoming expected “modest contraction” in industry growth, said John Howard, CFO.

The financial picture will be sored up by costs reductions associated with the “Value Path” initiatives contemplated as part of its long-term strategy.